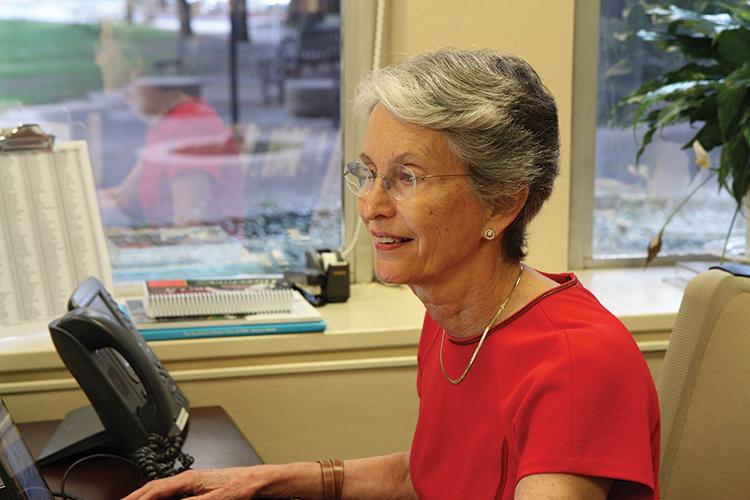 Liza Lee’s defining memory of Hockaday for her is not graduation, senior retreats or a gaggle of girls’ discussions. It occurred on a seemingly random fall day in the early 1990s. “This is going to sound horrible,” she said. “I was fairly new, and I had this ‘open door’ policy. This girl came into my office and began the conversation by telling me that she had been raped by her boyfriend.” Lee was the first person the student came to with the question, “What am I going to do?” But Lee saw a different question: “what are we going to do?”

What struck Lee about the situation was Hockaday’s communal reaction.

“The circle of faculty and students rallied around her and in the process created the first self-defense course to ensure girls were better prepared to protect themselves,” Lee said. “This made me realize that this is the place I want to leave my legacy, because nowhere else could they take such a horrible event and turn it into something positive.”

Before returning to Hockaday this summer, Liza Lee was not just a name on the Academic Research Center. During her time at Hockaday, she imple­mented block scheduling, raised the diversity rate from 17 to 24 percent and modernized the science, math, technology, arts and engineering curriculums. Lee generated support for expanding the academic classrooms by 40 percent and began the Campaign for the ‘90s that allowed for new investments in technology and for the Academic Research Center that bears her name.

“Liza Lee is the kind of leader I aspire to be everyday. When I was at Hockaday, Mrs. Lee was always so willing to hear the students’ concerns and opinions, but was direct and honest with her responses,” she said. “She always made me feel like I was important and so were my feelings, but she also was willing to tell me when I was wrong. She was reasonable and was willing to explain her decisions.”

Fine Arts Lead Chair Ed Long has served under several heads; however, he notes that Lee had the longest tenure after Miss Hockaday herself.

“She brought us into the 21st century, leaving us a legacy of creativity and important resources,” Long said. “Now she returns to us as an exceptionally experienced leader in this next chapter of Hockaday’s progress.”

Lee is on the fence about her digitalization of Hockaday, saying that it has made “communication harder.” Despite her push that led to the laptop program being introduced to the student body in the early 2000s, she believes that modern technology interferes with face-to-face communication.

“It really means we’re behind a screen, and there is a screen behind you and the person you’re not really talking to,” Lee said.

However, Lee did not set out to make these sweeping changes that would shape the school into the institution it is today.

“It used to frustrate me when people asked me about my vision, because I didn’t really have one,” Lee said. “The most I could say was I just want to run a girls’ school that everyone thinks is wonderful. Of course, everyone already thought Hockaday was wonderful.”

“I decided I wanted to run a school that educated girls, which everyone recognized for the content of their character as well as their intellect,” she said.

As Interim Headmistress, Lee wants to adhere to the traditions that made Hockaday what it is today. She does not want to make any major changes. Instead, she wants to allow the future new Head to see Hockaday the way she saw it in 1990, with a graduation ceremony steeped in tradition and the cohe­sive student body, but to allow the person to have a fresh perspective on the next chapter of Hockaday’s history.

The traditional aspect of girls’ schools has always been a part of Lee. She grew up in the Upper East Side in New York and attended two different all-girl schools from pre-K until graduation. She then attended Mount Holyoke College, one of the Seven Sisters, an association of seven women’s colleges connected to the Ivy League Schools. She would return to the all-girls school she graduated from, The Brearly School, as a teacher and administrator.

“I find it ironic that I am just now remember­ing this, but we all wore the exact same white dress when we graduated,” Lee said. “I think our head­mistress had the same ideas as Ela Hockaday… right after the Depression and the Second World War, we felt conscious that everyone needed to be dressed alike so that no one could tell who paid more for a dress. Miss Hockaday wanted her girls in the same dress, because she never wanted there to be a distinction between her girls based on income as well.”

As a longtime proponent of all-female educa­tion, Lee believes that same-sex education allows students “ to really be able to figure out who [they] are in a world of women.”

To Lee, one of our greatest traditions is schol­arship. “The number of alumnas my age who can boast of the kind of Latin, English and even math and science training, for the time, is incredible,” Lee said. “Teaching to the test and the obsession with ‘elite’ colleges is blinding girls from the value of what they’re learning.”

Instead, Lee believes that Hockadaisies should live by a different mantra.

“I want girls to come to school [and] to life with a question,” Lee said. “What can I do to make the world a better place?”