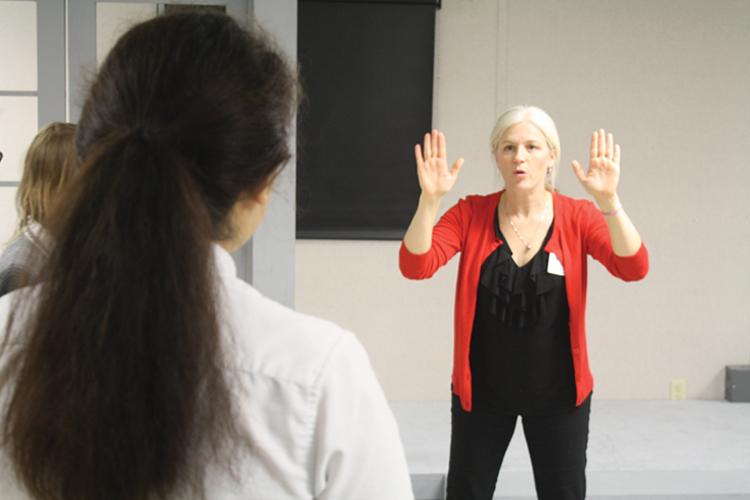 New Studio Art teacher Emily Howard had barely started her interview trial class before making an impres­sion, after Howard’s interactions with students sparked immediate creativity, Visual Arts Chair Susan Sand­ers knew she had found the best choice. “[Howard’s] own work is very beautiful and interesting,” Sanders said. “[Her work’s] ideas together with images are so strong.” Howard will teach her students to blend ideas and images in four Studio Art classes this year, including the Advanced Placement level.

She knows the importance of being able to present to large groups of people and will be adding to the AP Studio Art curriculum, accordingly. This year, students will have a presentation component, in addition to their AP-re­quired portfolio.

“They’re required to have a rationale,” Howard said. “I want them to be able to express themselves and their own artistic viewpoints.”

Howard, a professional artist herself, will expose her students to the possi­bilities of artistic careers. She will also provide opportunities for submissions to scholarship contests and art competitions.

“Art is not just a for-fun hobby,” Howard said. “You can make a really suc­cessful, lucrative career out of art in so many ways.”

Cooper, who is the Studio Art representative for the Fine Arts Board and plans to major in art in college, appreciates Howard’s new ideas for the class.

“Hockaday students are so driven that we need someone who’s going to take arts and not have it isolated from academics but rather have it [be] cohe­sive,” Cooper said.

Howard thinks that the new Fine Arts building, as well as this new blend of visual art with other parts of the Hockaday academic and artistic experience, will help draw more attention to the arts. She wants to partner with her col­leagues to strengthen the Fine Arts department from the inside out.

“I want the arts to be known,” Howard said.

“Everyone who I thought might know her in some way has known her,” Wortley said. “They were all like, ‘Oh, you’re going to have her? You’re so lucky!’”

Gray, a professional actress in New York for over a decade, has more re­cently been active in Dallas productions through Dallas Children’s Theater. She also still reads voiceovers for commercials and audiobooks.

After hearing about the job posting for the vacant spot in the Fine Arts De­partment, however, Gray knew it was time for a career shift and put her New York career on hold. She’s been a professional actress there for over a decade.

After applying, Gray and Wortley skyped before the in-person interview. Wortley had nothing but good things to say after her first interaction with Gray.

“I loved her by the time we got off the phone,” Wortley said, citing Gray’s creativity as something she sensed immediately. “You instantly get a sense of her personality and you can’t help but like it.”

The program Gray inherited from former Hockaday and St. Mark’s drama teacher Rod Blaydes transitioned quickly to adapt to one full-time teacher for Hockaday, even adding an extra class.

Her students, including senior and Fine Arts Board chair Karla Salinas, ap­preciate that their teacher is always accessible and has more time to plan classes.

“There’s a lot more structure. She has more time to focus on just [our] class and her other class,” Salinas said. “She has a lot of plans for us.”

Some of those plans are already in action. Because each school now has its own drama teacher, Hockaday will have its own plays separate from St. Mark’s for the first time in 34 years. The fall play is the comedy “Hay Fever.”

“We’re doing more shows, more roles, more everything,” Gray said. “I want to do as much as I can for the girls.”

While Gray cites a desire for “collaboration with other schools” for perfor­mances, she also has a new vision for improv at Hockaday.

The St. Mark’s-Hockaday improv group is a combined group from both schools with an almost-daily practice schedule and well-loved skits. Gray’s decision for a Hocka­day-only improv group will focus on acting games and sketch-writing.

But coffeehouse appearances by SMockaprov won’t stop, Gray says; she recognizes the signifi­cance of performing in front of an audience.

While Gray already has many plans in action for current students, she’s looking ahead. “We’re standing at the bottom of an amazing mountain range,” Gray said. “We’ve got all these amazing places to go.”

Some of these places are right here in the Dallas community. Gray hopes to take Hockaday shows on the road, sharing the drama department with local elementary schools and senior living communities.

Both Sanders and Wortley see great things ahead for the Fine Arts department.

Sanders sees Howard putting down roots that will strengthen the visual arts program.

“She’s at the front end of her career,” Sanders said. “The program will grow with her and she’ll grow with the program.”

Wortley echoed expectations for growth throughout the Fine Arts, know­ing both teachers will continue strengthening their programs while bringing in brand-new ideas.