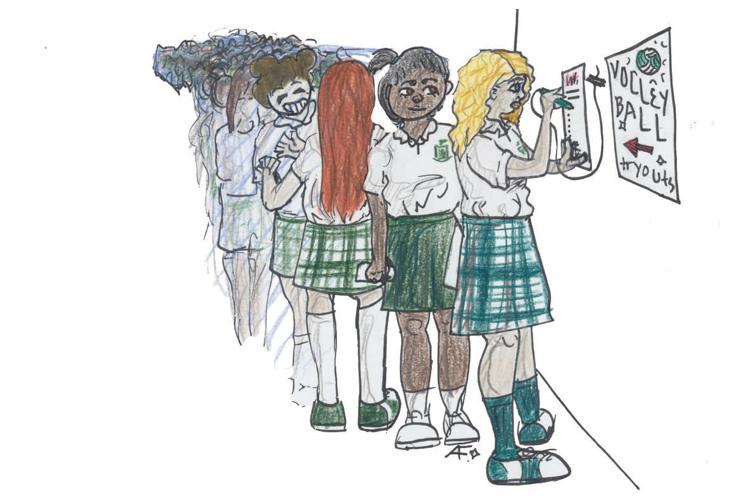 With more than 40 students trying out for volleyball in Aug. 2014 and again this year, varsity volleyball coach Adaku Achilefu-Ebeniro and Athletic Director Tina Slinker added an additional junior varsity team to both help the program grow and to allow more girls the opportunity to play.
“Last year 45 girls tried out and I had not planned accordingly,” Achilefu-Ebeniro said. “I had to cut about 15 girls, which is not anything a coach wants to do.”

After receiving an overwhelming amount of interest for the last three years, Achilefu-Ebeniro decided it was time for a change and set out to create a third team.

Achilefu-Ebeniro decided to have roughly 15 girls on varsity and 10 girls on each of the junior varsity teams, junior varsity green and junior varsity white. With six players on the court at once, each girl now has significantly more playing time with the addition of a new team.

Once Slinker approved the change, Achilefu-Ebeniro began finalizing all of the various details for the program.

Originally, both Slinker and Achilefu-Ebeniro hoped to add a third coach to the program, but junior varsity volleyball coach Jason Atwood offered to coach both teams.

Sophomore Grace Olson, a junior varsity green player, believes that the practices focus more on the development of the team rather than individual players.

“We do not get a lot of individual attention, it is much more what the group needs,” Olson said. “So there is not a lot of change in how we are playing.”

On the other hand, Atwood believes that the girls are still progressing, even with a larger team.

“The girls are progressing more than on a smaller team,” Atwood said. “They get to see the mistakes more through added competition and can easily fix them.”

“With a lot of group practice, you know where you are supposed to go and what everyone else is supposed to do,” Espinosa said.

While several athletic teams have high numbers at tryouts similar to volleyball, there is not enough physical space to add another team. Typically, Slinker will look at the numbers for each team and adds another team if one has a large number of girls trying out over the course of about three years. At this point there are no plans for adding another team to any other sport.

“Tennis carries a large varsity roster and no junior varsity team,” Slinker said. “We cannot add another team because we do not have the facility space.”

As the athletic department continues to grow, Slinker hopes that many teams will have a larger turnout and that the teams and continue to have success.

“We want to offer as many girls an opportunity as possible to play a sport,” Slinker said. “And still maintain a competitive program.”