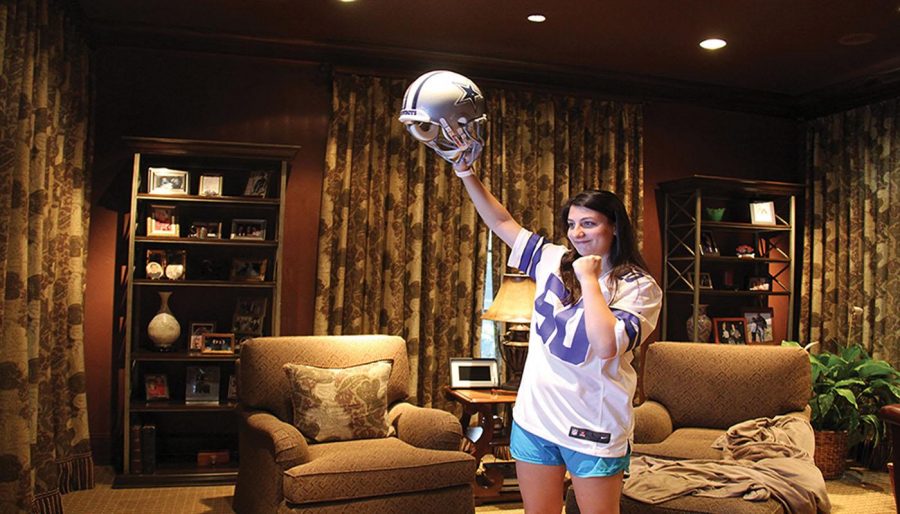 It’s a Sunday night. Sophomore Michelle Mankoff reclines in her black leather chair, eyes glued to the television screen. She flips through the channels of football games on NFL Sunday Ticket as she tries to track her fantasy football players and catch all the exciting plays. Every few minutes she stares down at her phone, checking her fantasy football and ESPN apps to track the success of her starting lineup.

“As a woman who genuinely loves football, I am happy to see more and more women delving into it, but I am just as happy to see fantasy football growing as a community regardless if they are men or women playing,” Loza said.

Loza believes this rise occurred because fantasy football allows people to engage in a social way as well as allow people to network. In her opinion, people are no longer making deals on the golf course but rather in fantasy football leagues.

In addition, Loza thinks fantasy football appeals to women because it is more than just sitting in front of a television and watching the game.

“I think that fantasy football is an amazing opportunity to blend sports and drama and social engagement,” Loza said.

While the number of women playing fantasy football has increased, Nickolas W. Davis and Margaret Carlisle Duncan, in their 2006 article “Sports Knowledge Is Power: Reinforcing Masculine Privilege Through Fantasy Sport League Participation” published in the Journal of Sport and Social Issue, said that fantasy football serves as a private space for men to practice masculinity without the interference of women.

Mankoff can attest to that since she has experienced this “boys’ club” mentality firsthand. When she tried to join a league at St. Mark’s, she was denied entry.

Reflecting on this reality, Anvit Reddy, a St. Mark’s senior who plays in a fantasy football league composed of 19 other St. Mark’s seniors, said of his league, “Yes, it is sort of a boys’ club, but if girls were to join the entire culture would change.”

The way sexism is often expressed in fantasy football leagues is not always overt exclusion but rather subtler forms of discrimination. While participating in other co-ed leagues, Mankoff acknowledged that she was not always treated the same as men in the league.

“In fantasy football, you smack talk a lot and you trash talk the other team,” Mankoff said. “But in that way, I kind of felt like I was on the outside. No one really would butt heads with me and try to spark a little spat.”

According to the Fantasy Sports Trade Association, the average fantasy football player is a 37-year-old male with a bachelor’s degree and full-time employment. Mankoff, of course, breaks this stereotype. In her online competitive league with nine adults, Mankoff revels in competing against these 37-year-old males. “I really like this [league] because they all think I am some middle-aged man while in reality I am a 15-year-old girl,” Mankoff said.

Other harmful stereotypes that undermine women in fantasy football are often perpetuated in social media. Common examples include the ideas that women choose their players based on how cute they look in their uniform and that women play fantasy football to impress their boyfriends or significant others.

However, this is not the case with Upper School math teacher Jessica Chu, an avid fantasy football player and one of the only women in her league. While she says her husband may not admit it, Chu said that she got her husband into football, not the reverse. “He wasn’t very passionate about it,” Chu said. “But once I started watching [football] a lot, he started getting into it and he got very excited.”

Mankoff, Loza and Chu are part of the vanguard of women who challenge male supremacy in fantasy football. These women do not play to break gender barriers, but also for the pure enjoyment of it.

“I think that fantasy football is a really fun thing,” Mankoff said. “[It] should not just be limited to men.”