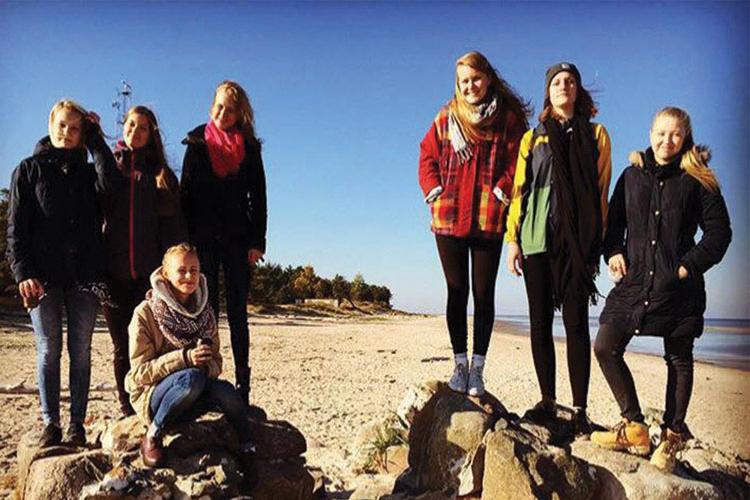 At 10:30 a.m. on a Friday in October, sophomore Luiza Gruntmane gets off a 10-minute tram ride with her classmates, a route that took her from the first building of Riga’s Design and Art High School to the second.

Since Sept. 1, Luiza has been studying abroad, attending a regular high school, in Riga, the capital city of Latvia.

With her classmates, Luiza heads to Physics, her second class of the day after Composition. Feeling cold, she shivers, but hurries ahead.

More than seven hours later at 6 p.m., Luiza heads toward a local math center for tutoring to keep up with Precalculus at Hockaday. As she walks, she looks up to see the sky quickly darken, which, according to Luiza, happens in the winter because Latvia, located at a high altitude, is “literally on top of the world.”

Luiza follows after the footsteps of her older sister, Marta Gruntmane ‘08, who attended school in Latvia in eighth and ninth grade before starting at Hockaday in 10th grade. Like Luiza, Marta did not participate in a special study abroad program; rather, she attended a regular high school there.

“I am always pushing her to be brave and take chances, and live an exciting life,” Marta said.

And her parents suggested she do it too, so Luiza thought, “Why not?”

“I like to take risks, and I thought it would be fun to go to a country outside of America to see what it would be like,” she said.

It is not a surprise the sisters chose to study in Latvia. Their parents are both Latvian and their grandmothers still live there.

According to Assistant Head of Upper School Elizabeth Jones, Luiza plans to make a smooth transition back to Hockaday after her time abroad.

Luiza’s grades at the Latvian arts school will not factor back into her Hockaday GPA and will appear on a separate transcript when sent to colleges. However, the work she completes in Latvia will be counted towards her graduation requirements, so that she will be able to reenter Hockaday smoothly and graduate on time.

This process that Luiza is following is modeled after how other Hockaday students have taken advantage of special study abroad programs, like High Mountain Institute in Colorado and Swiss Semester in Zermatt, Switzerland.

For Luiza, who was unsure at first whether or not she would be getting academic credits, getting a unique experience took precedence over worrying about credits.

“I think that it’s better to just run and jump, and then when I come back I’ll figure out the rest,” she said.

But fulfilling her graduation requirements will not be a problem. She has her four years in high school planned to where she can complete Hockaday’s requirements on time.

Former Head of Upper School John Ashton also assisted her in her decision to study abroad.

“He was like my parents, who said it would be all okay when I came back, and that it was really important for me to get this experience,” Luiza said.

According to Jones, Ashton had “great conversations” with both Luiza and her family, and he spent time working to understand the curriculum Luiza would learn at the Latvian arts school to ensure that she could transition smoothly back to Hockaday.

“There was a lot of work done to make sure that she’s engaged in courses during her time away that will allow her to reenter Hockaday,” Jones said.

But studying abroad comes with challenges.

“The last time I painted was in like fourth grade, so it’s really difficult to make it look like I know what I’m doing, since most of my classmates went to an art school before going to this one,” Luiza said.

In addition, Luiza is taking all her core classes in Latvian, which is “pretty challenging, considering that before last month, I had never read a Latvian book before.”

Coping with these challenges, it often takes her longer than native students to complete her homework.

“While it might take native students to do drawing and math homework in three hours, it’ll take me five,” Luiza said.

Luiza said that Latvian math courses are more difficult than the ones she is used to in the States.

“They are insane at math…they learn pre-cal in eighth grade,” she said.

As a way to overcome these academic challenges, Luiza goes to tutoring four times a week to keep up with Precalculus and French at Hockaday.

“Sometimes it’s hard to fully experience being here because I have to do so much stuff,” she said.

These experiences were ones that Marta went through as well. “School in Latvia is pretty hard and the teachers are really strict,” Marta said.

Reflecting on her own time in Latvia, Marta is happy she had the opportunity to study abroad and said the benefits outweigh the complications.

“I learned to speak Latvian better and developed friendships there with girls who are still my best friends,” she said. “I got to gain life-enriching experiences, see the world and become a well-rounded person!”