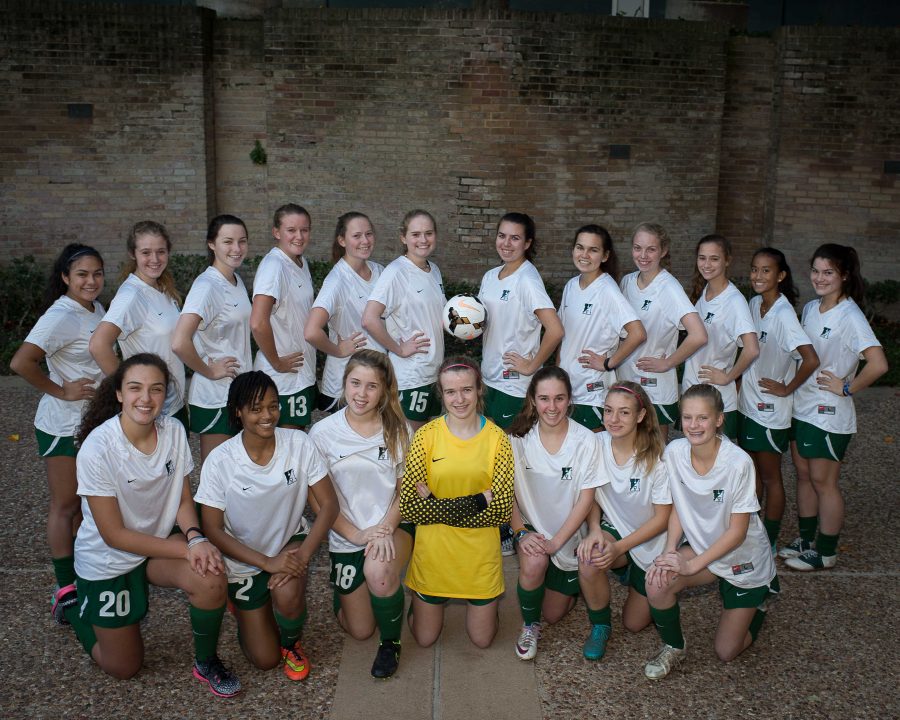 Grueling early morning practices, timed mile runs and competitive scrimmages with rival high school teams: all new elements of the Hockaday varsity soccer experience this season. Another new addition to Hockaday soccer? The creation of two JV teams.
After a record number of players came out for soccer tryouts, Head Soccer Coach Rod Skaife made the decision to create three teams: one varsity, a junior varsity green and a junior varsity white.

“To determine the number of teams we should have, I make sure that there are enough people to be on the field at all times and that there is opposition that is equally matched so that games are worthwhile,” Skaife said.

The creation of three teams also allows players to receive the most playing time possible on the field during games.

“We didn’t want to waste people’s time by having them practice five days a week and only get five minutes of playing time during a game,” Skaife said.

To up the ante on the competitiveness of the team overall, Skaife has introduced conditioning exercises that target the core, as well as short-distance sprints and long-distance runs this season.

“Last season, the team’s performance was dropping at the end of games, which is why we’ve decided to introduce more conditioning and core work,” Skaife said.

The rigor of the team’s practices has not gone unnoticed. Freshman and varsity soccer player Jenna Hofmann describes the practices as being “a lot harder” than the practices are for her club soccer team, Sting ECNL.

“The focus of varsity soccer is on winning games and improving your overall fitness,” Hofmann said. “And to do this, you have to work as hard as you possibly can,” she said.

Hofmann is one of seven freshmen who are new to the team this year. With only four juniors and seniors on the 18-member team, the varsity soccer team has a fresh new look on its prospects this season.

Junior Maddie Skaife has played varsity soccer and club soccer for three years and acknowledges that the difficult practices this season will help younger players gain experience and skill.

“We are a very young team, and if we aren’t going to out-talent [our opposition], we have to at least make sure that we are able to keep up with them and run with them,” Maddie Skaife said.

Thus far, the varsity team has only played scrimmages against teams in the Dallas metroplex, but counter-games – matches that affect the team’s rank going into SPC – will be played in January and February.

Though the varsity team’s win-loss record is important to him, Head Coach Rod Skaife believes that there are other reasons to play the game as well.

He said, “Soccer is rising in its popularity in the United States, and in the end, we just want our girls to play competitively and enjoy the game.”