Basketball Team Gets Their Head Back in the Game 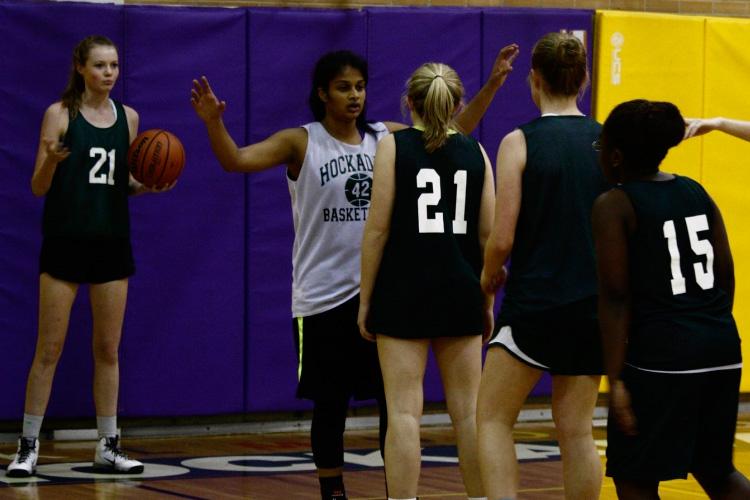 At an afternoon practice, the basketball team works on plays to get a leg up on their competition. Photo by Nina Labarba.

Jumping onto the baseline during basketball practice, sophomore Shelby Schultz sprints from one line to another as coaches Amber Metoyer and Robyn Gray blows their whistles. The noise signals the start of “champions,” the coaches’ version of yo-yo’s. Slapping the court at every designated line, Schultz sprints, ready to attack the court.

This type of conditioning has been a main focus of the team this year, with each practice involving even more than in years past.

Once Slinker hired Gray and Metoyer as co-head coaches just a few weeks before preseason started, the new coaches began to set their goals for the season and a new precedent for the revamped basketball program.

“Something new for the girls this year is not only holding themselves, but also especially their teammates to a higher standard,” Gray said. “We are going to breathe, eat and sleep holding your teammates accountable.”

With the goals of improvement through continued encouragement from teammates, Gray also hopes that the girls will be receptive to the idea as hard work and effort is needed for any and all of their goals to be achieved.

“The girls are determined and excited,” Gray said. “We want to show them that they can win through small successes on the court.” Additionally, Gray, a certified fitness trainer, hopes to instill a strong conditioning portion into the program in order to help the girls stay at their top level and continue to get better. With her experience, the team has continued to improve their level of fitness since the season started.

Schultz, who played on varsity last year as well as this year, believes there are a lot of positive differences with the team this year.”It is a lot more intense this year. There is not the, ‘You already made varsity, so you are going to make it again’ aspect,” Schultz said. “We have a lot more of a focus on begin organized as a team so I think we are going to be a lot better.”

Schultz’s philosophy on basketball aligns with Gray’s, as they both believe that in order to get better, the program must first show a united front as a team and ensure that first and foremost the team works well together.

In the long run, Gray hopes to have a basketball program similar to those in larger public schools or at the collegiate level where everyone attends games and cheers for the players. In order to achieve this goal, Gray has been attending practices by herself of not only her own team, but also in Middle and Lower School.

“I want to build a culture starting with the Lower School and change the dynamics of how basketball is thought about and approached to make it more attractive to the girls,” Gray said.

Through this re-creation of the Hockaday basketball culture, Gray additionally hopes to show the girls that winning a championship is not easy and takes a lot of hard work that does not happen overnight.

“Basketball is a totally different animal than any other sport. It is really difficult to win a championship in basketball,” Gray said. “But just to build champions on the court, I will take that any day.”