Winson Recognized for her Step Toward Combating Cancer 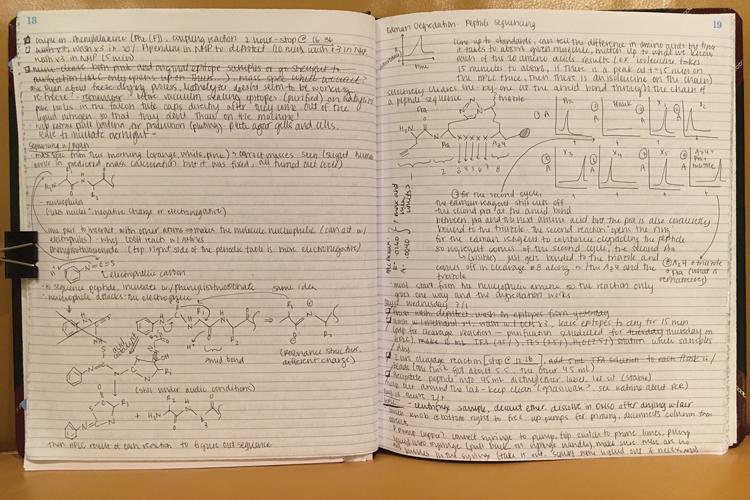 Over 1000 groups from across the U.S. submitted their projects to the Siemens Competition, a premier science and technology research competition. Only 97 were selected as Regional Finalists. Projects were submitted in late September and on Oct. 19 senior Emma Winson found out that her work was among those 97 selected.

Last summer, Winson worked for eight weeks for her uncle, James R. Heath, in his lab at the California Institute of Technology as a part of the Summer Undergraduate Research Fellowship program.

After completing eight weeks of research at Caltech, Winson’s group decided to submit its project to the competition.

According to Winson, that decision to apply for Siemens was “pretty random.”

After hearing about Das’s accomplishment, Winson remembers thinking, “Man! I’d never heard about that much at Hockaday but this seems like a really good competition to apply to. It’s very competitive. We’re doing this cutting edge research. Why shouldn’t we apply?”

The application process was “very complicated,” Winston said, entailing an 18-page report on their research, as well as poster and slideshow presentations. For the Regional Finals, the group presented in front of eight Massachusetts Institute of Technology judges. “It was truly the most nerve-wracking experience of my entire life,” Winson said.

Although Winson found it “very stressful,” she found it to be overall a “good experience.”

Fishel acknowledges the effort Winson put forth. “I can tell you that she worked very hard to prepare for the presentation that she had to give with her partners.”

Although Winson’s mentor, Heath lab graduate student Ryan Henning, did not participate in any high school science fair competitions, he acknowledges their importance.

“I think it is a tremendous opportunity to foster scientific interest in the next generation of scientists and engineers,” Henning said. “I hope more high school students follow Emma’s example and get involved with scientific research.”

Winson was originally motivated to do research at Caltech because she’d always known she loved science. Also, Winson did a biology research internship the previous summer at University of Chicago.

“Going into college, I was thinking what I might narrow down my choices of majors and figure out what I really like. Do I like engineering?” Winson said. “You just can’t pass it up!”

According to Winson, the Heath lab studies cancer, specifically one protein found in the human body called KRAS, which regulates cell production and division and, when mutated, results in tumorigenesis. Winson said that KRAS’s mutated form is found in about 25 to 30 percent of all human cancers, so “it’s a really big protein that’s gone after in the search for a cure to cancer.”

Winson worked on the project with two other high school students, Heath and his friend Joseph (Jun Hyuk) Oh. The project’s focus was to determine a way to inhibit or create a drug for mutated KRAS using a novel technique called protein catalyzed capture agents, which are small molecules that function as antibodies in order to take advantage of possible inhibitory allosteric sites on the protein.

“We had success, so that’s good,” Winson said.

While the project has been going on for about a year now, it is still continuing in the Heath lab.

As Winson had always been focused on biology, she found the lab experience at first “super daunting.”

“I didn’t really know much about chemistry going in, which is surprising seeing as it was a chemical engineering internship,” she said.

Over eight weeks, Winson and her teammates were primarily mentored by Henning.

Henning taught the students the laboratory techniques they used to perform their experiments, the underlying theories behind those techniques as well as other skills. “I also tried to emphasize the importance of communicating their results to others, and I think the students really succeeded in this area with the science fair competition,” Henning said.

But while Winson worked the most with Henning, she said she didn’t just have one mentor.

Rather, Winson feels that all six graduate students in the lab mentored her and were “very, very helpful.”

Working in the lab was no easy task. “Being called a SURF, you are practically a serf of the lab in the most feudal sense, so lots of working and doing what the grad students tell you to do, but you also get to do a lot of, ‘Come up with your own protocols,’” Winson said.

Over eight weeks, Winson got to work several interesting scientific research machines, including the Matrix Assisted Laser Desorption/Ionization Time of Flight machine, which she used to complete mass spectrometry.

“We were given free reign over all the machines,” she said. “It’s super exciting because you basically get to shoot lasers at things and learn how to read the graphs, how to interpret your data.”

Besides mass spectrometry, Winson also completed High Profile Liquid Chromatography runs and many Polymerase Chain Reactions (PCR), which amplify pieces of selected DNA. “Coming from a [biology] background, that was the one thing that I knew how to do, so I was pretty confident in my PCR skills,” she said.

Winson learned much about chemistry during her time at Caltech. “It was a lot of learning, a lot of reading, a lot of research on just like the background of what we were doing, but other than that, long days, long nights.”

In light of her achievements, Winson looks forward to a potential career in the science field. She hopes to major in science in college, specifically nanotechnology or materials engineering. However, she finds that  “working at a lab is a lot different than most people think it is.”

“It can be depressing. The days are very long, and you’re in a basement for 10 hours,” Winson said. “You’re expected to be in there at all hours of the day. You get a call and they’re like, ‘Our experiments end at 1 a.m., you need to be there to stop it.’ I’m like, ‘Why?’ I like sleeping.”

“I realized that I do like lab work and I like understanding laboratory technologies and processes, but I don’t know if I want to work in a lab for my entire life,” she said.

As a result, Winson has considered studying the business aspect behind scientific research.

“I really like understanding the science behind it, because I think that’s incredibly important,” Winson said. “But on the business side, your clients also really need to understand the science, and who better to describe it to them than somebody who has studied it, who understands it and maybe doesn’t work in the lab all day.”