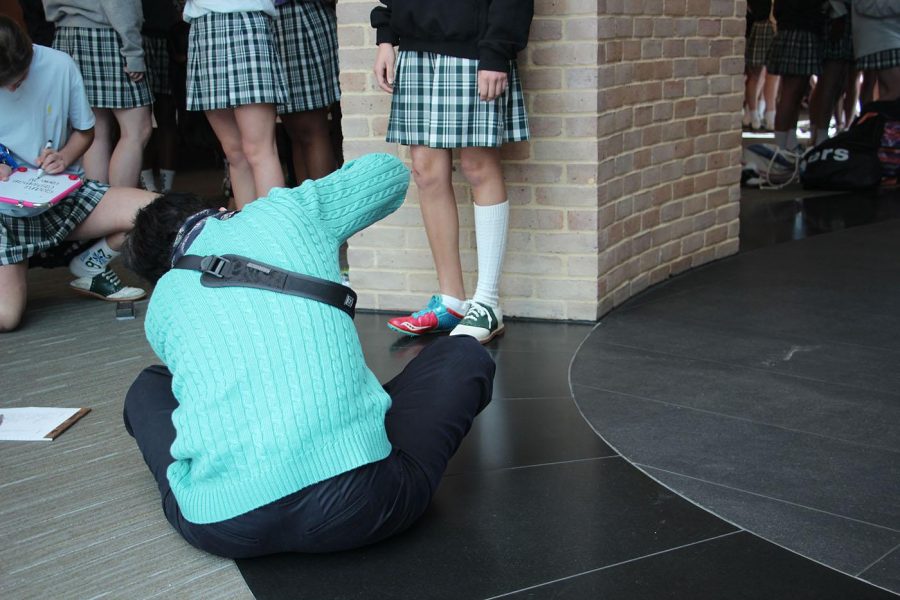 After all members of the Hockaday community were called to participate in the Saddle Shoe Project for the 2016 Hockaday Parent’ Association Benefit: Daisy Dance – a Classic Remixed, over 600 photos of students’ shoes have been sent to be developed.

Traditionally, each grade comes up with its own items to sell at the benefit, but this year’s school-wide Saddle Shoe Project combines the efforts and creativity of all ages into one large project that not only shows the unity of the community, but highlights the individuality of each student as well. Although Benefit Chair Donna Carlisle understood that getting all divisions involved in the process would be crucial for the project, the student turnout has surpassed her expectations.

“My initial thought was [that] this is something that the Lower School will really embrace because of the whimsy of it and then surprisingly the Middle School really embraced it,” Carlisle said. “And the biggest surprise for me was how nicely the Upper School girls embraced it on their own without any parent encouragement.”

According to HPA and Benefit Liaison Holly Hook, this large scale participation from the entire community embodies what the benefit is about.

“It adds an involvement of the students which is special, and having an exhibit there that represents the whole school is really the spirit of the benefit,” Hook said. “It is something that unites everyone in a really special way.”

Students were able to express their interests in their portraits through their shoe choices, or, in sophomore Bailey Hollingsworth’s case, the lack thereof.

“In my picture, I posed with a pointed bare foot that was having water poured on it from above the shot,” Hollingsworth said. “This representation was for my place on the Hockaday diving team, which I hold very close to my heart and which is a large part of my identity.”

Hollingsworth enjoyed being able to showcase her interests outside of academics through the project.

“Sometimes all people see when they look at daisies is the academics, but athletics are a huge part of who we are as well,” Hollingsworth said.

The benefit committee is aiming to install the exhibition the week leading up to the benefit on March 12 to give students an opportunity to see the final installment. The pictures will be hanging in Penson Gym labeled with the name of the student as well as organized by grade or year so viewers can easily find a specific portrait.

It will be one of the focal points of the auction and an attention grabbing display.

“I think people are going to be blown away seeing it in its totality because parents either haven’t seen any part of it or have maybe helped with just their daughters’ class,” Hook said, “but it will be fascinating to see 700 Hockadaisies’ expressions of their individuality.

Carlisle anticipates that the final piece will be able to have a large impact.

“I just think that when you see the whole scope of it, so the little feet of Pre-K with stuffed animals on the foot or a princess shoe,” Carlisle said, “all the way to our seniors who are wearing shoes that might represent what they hope to do in life or their talents they have developed over the years at Hockaday will be quite impactful.”