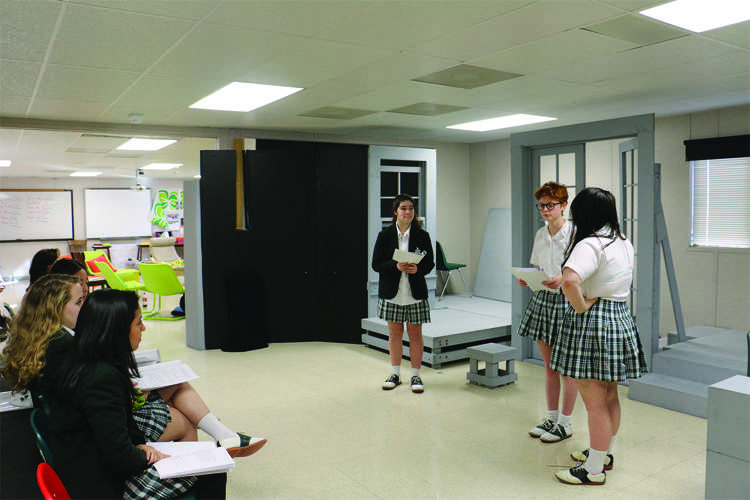 A far cry from being the shy new kid, sophomore Grace Lowry has written and is directing her original play, “Flooded!,” recruiting faculty and students alike to act in her production. The play, which focuses on six patients with mental illnesses varying from night terrors to anxiety as they are stuck at a therapist’s office stuck with one of the doctors and the office receptionist as a result of a flood, is her first as director.

Lowry, who is a creative writer and member of the Drama Club, has been writing original plays since eighth grade and has been interested in all aspects of performance for as long as she can remember. “I have always been interested in drama,” Lowry said. “When I was in Lower School, my mom got me this old book of plays that I would bring to recess and act them out with my friends.”

Upon completing “Flooded!,” Lowry worked with the Drama Club and Head of Upper School Terry Murray to arrange for it to be performed at Hockaday. With her directorial debut, she hopes to spread the message that mental illnesses, even the lesser-known ones, affect people everywhere.

“I am a member of the Drama Club, so I got in touch with the president, Maria Zhang. I asked her if it was maybe something we could think about doing through Drama Club,” Lowry said. “We got it passed through her and then passed it through Mr. Murray.”

After seeing an email from Lowry soliciting actors, Upper School English teacher Sarah Traphagen, who has been acting since high school, asked if she could audition for the role of Dr. Susan, the therapist. Soon after, Lowry casted the play with Traphagen playing Dr. Susan.

Through attending both auditions and rehearsals, Traphagen believes that Lowry completely embodies the roles of both being a playwright and a director.

“The play is beautifully written,” Traphagen said. “She took what could be very difficult topics and turned it into a comedy; that’s what I really love about the play.”

Through writing the characters as seemingly healthy people with slight quirks, Lowry hopes to expose more people to the reality and humanity of mental illness. “When you think of mental illness, you think of things like schizophrenia and bipolar disorder,” Lowry said. “But you do not think of something like night terrors, which affect so many people, and all of these things that are not quite as threatening.”

Upper School drama teacher Emily Gray, who has been advising Lowry throughout the production, shares the sentiment. “This play will help to show that it is okay to talk about things,” Gray said. “None of these things need to be dirty little secrets. When we talk about them, they suddenly become not as big of a problem.”

After finishing writing in late September and holding auditions open to the entire Upper School, faculty and staff included, Lowry casted the play, which includes students ranging from freshmen to faculty members, and began to hold weekly rehearsals during Y periods with the complete cast.

According to Traphagen, the attention Lowry pays to each character, rehearsal and the play as a whole will make for a successful show.

“[Lowry] paid a great deal of attention to each character and what they go through and have to process,” Traphagen said. “She has a vision…she tells us that ‘we need to get to know our characters’ as well so there is that mutuality to it.”

Similarly, sophomore Paloma Renteria, who plays the role of Kait, a girl diagnosed with histrionic personality disorder, believes that Lowry has thrived in the role of director and has successfully executed her vision thus far.

“Grace is an awesome director. She is an amazing writer,” Renteria said. “She has a really good idea of what she wants to do. I think she is going to put on a really great show.”

Lowry and the rest of the Drama Club are aiming to have performances of the play for the entire Upper School in the beginning of April. Exact dates and location have not been decided. To get caught in the storm of “Flooded!,” keep an eye out for emails about the performances.