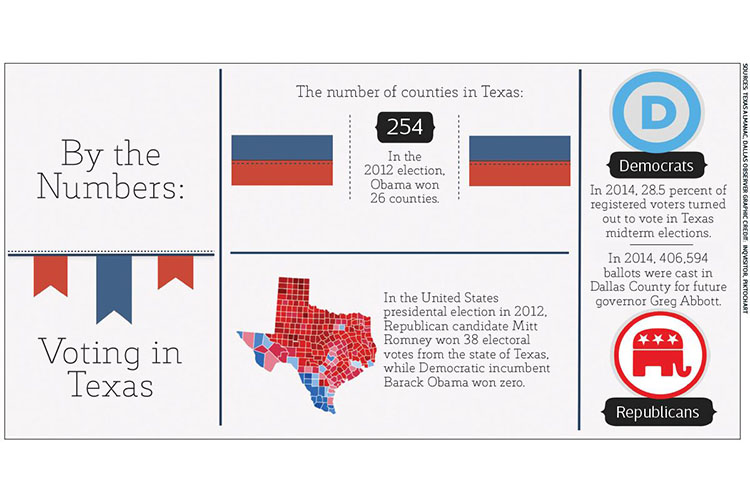 Texas. Home of Dr. Pepper, America’s Team and the one of the lowest voting turnouts in the country.

Voting participation in Texas has been on a precipitous decline for the past few years, and we’ve moved down from 47th to 49th in the country, only ahead of Indiana. Yes, this means that even North and South Dakota beat us.

Guys, this is really embarrassing. We have Blue Bell, the coolest music festivals and killer queso, and we’re about to throw away our sterling reputation for low voter turnout? Come on. We can totally do better than that.

On the eve of a new year accompanied with a deluge of tweets, texts and news coverage about primaries, it turns out that our votes are incredibly important during these elections – it’s been eight years since an election without an incumbent, and we have the power to influence the results either way.

I recognize that this sounds idealistic, especially for Texas voters, because it’s a fact that Texas is indisputably red (it hasn’t gone blue since Bill Clements’ gubernatorial election in 1979.). We’re not a swing state. Why even vote?

In the interest of full disclosure: yes, I am a Democrat. And yes, I plan to vote in the next election.

For my fellow Democrats, I realize that we are voting in a losing battle. But it’s worth it to try, right? If you have the ability to vote and don’t, you have no power to complain about any failures of an elected official – you, too, have failed if you do not exercise a fundamental American right to attempt to change a perceived flaw in the system.

But on the other side of the coin: not voting in Texas if you’re a Republican because “it’ll be red anyway” shows a high degree of complacency and, quite frankly, is lazy. Imagine if every Republican stopped voting in Texas because they assumed that everyone else would vote for them. It’s a version of the bystander effect, and in this scenario, no one wins.

To everyone: voting is a civil right. Things are rarely free in America, and if you have the right credentials, this literally comes at zero cost to you. Feeling busy that week? Found yourself recently relocated to South Dakota or the U.S. Virgin Islands on the eve of an election? Never fear – if you’re unable to make to make it to the polling station that day, absentee voting ballots exist for you to vote on time in this country! And even better: you can vote by mail, or do early voting, if a jam-packed schedule won’t permit you to mosey on down to the nearest station. As such, there is literally no excuse for not voting.

Voting is a true fundamental right, and regardless of any falsities or biases you see in politics, one truth remains: your vote matters and counts more than you think it does. It’s a mark of a true American.

And besides – it’s high time that we beat South and North Dakota at this once and for all.