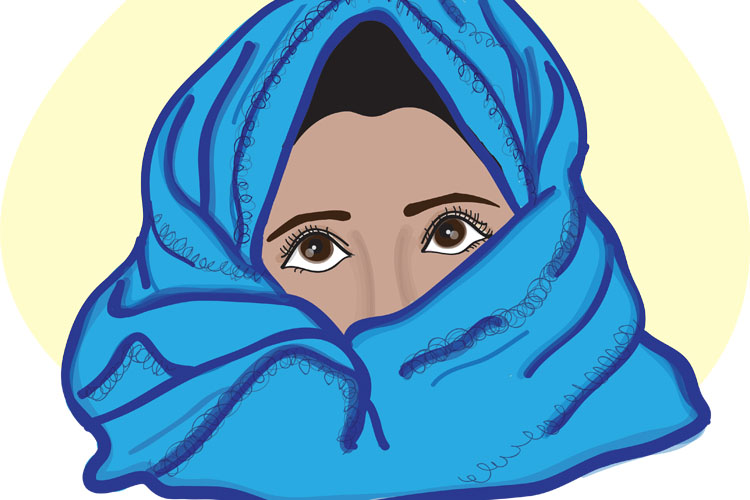 “Donald J. Trump is calling for a total and complete shutdown of Muslims entering the United States until our country’s representatives can figure out what is going on,” Republican presidential candidate Donald Trump said, reading from a piece of paper about Muslim immigration released by his campaign.

I pressed pause. Fifteen seconds had passed in a video of Trump speaking at his campaign rally on Dec. 7 in Mount Pleasant, South Carolina, and I just didn’t want to hear more.

The emotions came one after the other as I attempted to stomach his words.

I immediately felt angry. “A total and complete shutdown!?” If such an outrageous scenario were to actually happen, who would it apply to? Syrian refugees struggling to escape the war that has torn up the place they used to call home? Muslim-American citizens returning from a trip overseas? Muslims serving in the military? My own mother and father? Me?

Next came the frustration. As a Muslim, nothing is more exasperating than being placed in the same category as Islamic terrorists. If you ask me, those people are not Muslims. Their true religion is violence and hatred. They kill innocent people in the name of Islam — and the Islam that I know, the Islam that has nurtured me for as long as I can remember, the Islam that has helped me grow closer to God, does not sanction such inhumane crimes.

All of this bitterness was initially directed toward Trump, at least until I decided to click play again. And that’s when I felt hurt. Sure, Trump’s words were, and still are, offensive. But the cheering, whistling and applause that followed his statement — that’s what was truly upsetting.

For months, I’ve always wondered how Trump continues to lead the polls almost every week without fail. Some of his comments and tweets are the opposite of what a presidential candidate should be saying; they’re insensitive and prejudiced.

But I’ve realized that Trump’s success comes from his choice to abandon the concept of political correctness and state what some people in this country actually feel and believe: According to a New York Times/CBS News poll conducted in early December, Americans are more afraid now of an imminent terrorist attack since the weeks following Sept. 11, 2001. Seventy-nine percent of those surveyed “believe a terrorist attack is somewhat likely or very likely in the next few months.”

Perhaps one reason that many Americans are feeling this way is because recently, nearly every news source has written an article or two intertwining the words “bombs,” “shootings,” “radical Islam” and “Muslims.” These articles became even more commonplace following the events in Paris and San Bernardino.

Of course, hearing about such unjust tragedies would make anyone worried and afraid. So when an influential public figure like Trump says that Muslims should be banned or at the very least placed in a national database, he’s appealing to the masses by making them feel “safe.” He’s using a fear-mongering tactic to garner more support for his campaign. He says that he wants to “make America great again,” yet he’s simultaneously going against the constitutional rights of Muslims and violating the ideals that America stands upon.

Many don’t realize that this is exactly what groups like ISIS want. They want to create a divide between Islam and the West. They want Muslims to feel like they don’t belong so that they can recruit more people for their cause. If we want to stand up to terrorist organizations, then staying united is the best way to do so.