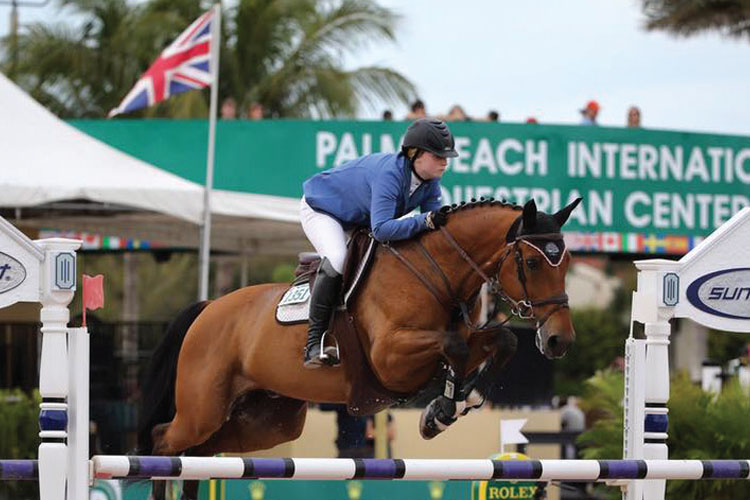 After packing up her last few items, senior Anastasia Stewart left for Palm Beach, Florida at 6 p.m. on Thursday, Jan. 7. She missed school the next day and spent the entire weekend there, finally returning home at 5 p.m. on Sunday. Stewart chose to follow this schedule — of missing school and its many burdens — for two additional weeks, all to pursue her passion of horseback riding, for a chance to compete at the annual Winter Equestrian Festival.

“Flying back and forth was definitely straining,” Stewart said. “I got a little sick the second week, and I’m pretty sure it came from being in such an enclosed area for hours every weekend, but I knew it was worth it because balancing riding and school is something that I think is really important.”

But Stewart is not alone. Senior Claire Fletcher and freshman Emma Shore also competed at WEF. Fletcher followed a similar schedule, flying to Palm Beach on Thursday, Jan. 21, missing school the next day and flying back Sunday night. She chose to miss a whole week of school between the second and third weekend by staying in Florida.

Balancing both schoolwork and the competition can be difficult, but for Fletcher, who has had plenty of experience, it is not too stressful.

“I’ve been traveling back and forth from horse shows like this since the fifth grade, when I went to Arizona for two weeks,” Fletcher said. “I just have to be really on top of my schoolwork. I do it in between riding my horses.”

Because it is within the international circuit, WEF has competitors coming from all over the world, from South America to Europe. Although the entire competition lasts for 12 weeks from Jan. 13 to April 3, riders are allowed to choose which weeks they want to attend.

Both Fletcher and Stewart competed as jumpers in the amateur division, in which competitors jump over obstacles ranging in height from 1.20 meters to 1.40 meters.

As riders generally do not need to qualify to compete, making WEF open to all riders who can make the trip to Florida, competitors range from “past Olympic riders to young pony kids,” Stewart said. Stewart said she has always wanted to go since she started getting seriously into riding at age ten. “The people that you get to see when you’re there, it’s just amazing. You get to see so many professionals that you hear about, and you look up to.”

Top-placers in WEF can win points or cash. Riders win points each week if they place in the top eight, with competitors winning more when placing higher. However, Fletcher, Stewart and Shore were not there solely for the prizes but rather mainly for the experience.

“This is where all the riders in the Olympics and in the World Cup come to compete,” Fletcher said. “It’s a really cool experience because I could be warming up to go in the ring, and right next to me will be someone who competed in the Olympics before or is really, really famous.” Stewart mentions that watching others in general, regardless of their level, is beneficial.

“They don’t necessarily have to be people that are better than you. Riders always make mistakes, so you can look at other people’s mistakes and learn from them,”Stewart said. “It’s fun to watch the flawless professional people, but it’s also good to watch the amateurs and the juniors.”

Shore has also learned much from WEF, including how to ride her horse regardless of its mood.

“Normally [my horse is] pretty chill, but after an extreme change in weather, horses tend to get riled up,” Shore said. “She was so pumped to be out of her stall that she ran down a line in five strides that was supposed to be six. Eventually we got her calmed down before we competed.”

Looking forward, Shore will continue riding and try to reach higher at competitions like WEF.

However, Fletcher will not be riding on a college team, as she points out that college riding is very different from what she does now. According to Fletcher, college riding has a “catch-ride system,” which means that when you compete at another school, you must swap horses with that hosting school, and you only get four jumps on a horse that you have never ridden before you must compete.

While Fletcher does not find the “catch-ride system” appealing, Stewart finds it exciting.

“It’s really testing your ability as a rider to be able to adjust your ride to fit a horse,” Stewart said.

Stewart has committed to riding at the Savannah College of Art and Design, which has one of the top college equestrian programs in the country.

While Fletcher will not be riding for a college team, she hopes to keep riding when she returns home from school to visit.

“Maybe later I might be able to bring one of my horses up, and I could ride during the week.”

While she will not be doing it as intensively, “it’s something [she’ll] probably continue doing for the rest of my life.” Stewart agrees, as she does not think that she will ever be professional, but she hopes to always have riding in her life. “I don’t think I’ll ever be able to let it go,” Stewart said.

“Even if I take a break for a little bit, I think I’ll always find my way back.”