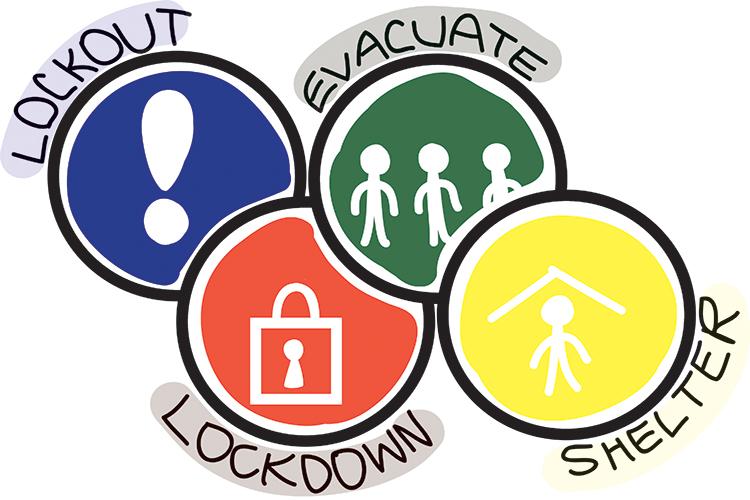 Feb. 23, 2010 was a normal school day at Deer Creek Middle School in Edmond, Oklahoma, or at least it was supposed to be. Now retired math teacher Dr. David Benke was on afternoon bus duty, when he saw a gunman opening fire on students.

Nine seconds later, Benke risked his life to tackle the man, successfully disarming him and saving multiple lives in the process.

“From my personal standpoint, I couldn’t have lived with myself if I hadn’t been ready,” Benke said.

In early January of 2016, Benke came to Hockaday and shared his story with faculty. During his presentation, he emphasized the importance of preparedness.

According to a study by the Harvard School of Public Health in 2014, mass shootings have tripled since 2011, and Hockaday has certainly recognized this fact. Head of Upper School Terry Murray has been influential in improving security protocols. The recent self-study combined with events happening both nationally and internationally have caused the school to rethink its safety and protection measures.

“All schools are reacting to the safety of their schools, communities and campuses, and there is a push in schools to elevate and upgrade their security. Some of it is coming from local police and fire departments, some pressures are coming from politicians, some from internal administration and some comes from my desire to make sure that we are a safe school,” Murray said. “My emphasis on safety and security is not for overreaction, but an enforcement of how things are done at Hockaday.”

But the safety improvements that visitors, students, faculty and staff experience on a daily basis were implemented some time ago, in conjunction with Director of Safety and Security Karyn McCoy’s arrival to the school in 2012.

McCoy has managed a long-term security plan over the past five years, which has involved installing internal and external cameras, providing access cards and establishing guard checks and security desks at major entrances.

The fifth phase, part of which was incorporated in March of this year, included setting up cameras in the overflow parking lots so that security guards can ensure the safety of students as soon as they arrive on campus. In the future, the school plans to install cameras that can overlook the sports fields.

While technological improvements are certainly essential, the most important aspect of being well-equipped for a crisis is education of the students, faculty and staff.

“I think that everybody being educated and everybody being on the same page is the biggest deterrent we have to any kind of incident occurring at our school. That’s just fact,” McCoy said. “If you are prepared, and you build that culture of preparedness, you will be able to act when you’re faced with that situation.”

Despite the many initiatives that have been completed, McCoy and the administration hope to continue finding new ways to make the school even safer. This past summer, McCoy worked on creating an app called Crisis Manager. All current faculty and staff members have the app and are assisting McCoy in carrying out the app’s trial period this year.

Crisis Manager includes basic security and safety protocols, such as an explanation of CPR with diagrams, what to do during a lockdown, lockout, tornado drill or fire drill, information on parking at Hockaday, and other beneficial knowledge. By graduation, McCoy hopes to have the parent version of the app completed. A student version is also being created and may be ready for use by the start of the 2016-2017 school year.

Additionally, the announcement of the open-carry law in Texas at the start of 2016 influenced the school to place signs at five major entrances to warn visitors that guns are not allowed on a person nor in a vehicle anywhere on campus. While these laws already exist for institutions of learning, Hockaday chose to add the signs to “prepare us for the future and prepare us for any kind of incident that might occur,” McCoy said.

This notion of being ready revolves around ensuring that students know what to do during any situation that compromises their well-being. As a result, on April 22, all teachers will receive an emergency handout to hang up in their classrooms that will explain the Standard Response Protocols that Hockaday follows. These basic protocols involve four actions to keep in mind during a crisis: lockout, lockdown, evacuate and shelter.

“In schools, we want to make sure that we keep it simple, but keep it to the standard, so everybody is doing it the same, so that no matter where you go, you’ll be familiar with it and know what to do,” McCoy said.

According to Murray, each minor change in security protocol is to ensure the preparedness of the school.

“We made a promise that we will not only teach you, but also protect you,” Murray said. “This whole idea about self defense and drills is not about where you are now, but where you will be in the future.”