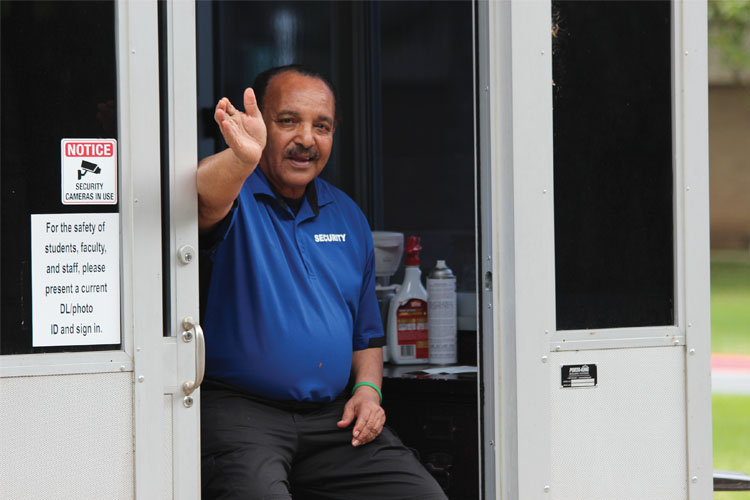 On April 1 at around noon, sophomore Ali Hurst opened her phone to find an email with the subject line “Kifleab ‘Kief’ Tekle to Retire” from The Hockaday School after 30 years on April 15. Sent on April Fool’s Day, lifer Hurst was convinced this was a prank. It was not.

Abby Hoak-Morton ‘05 confirmed many people’s fears when on April 3 she created a page on GoFundMe to collect funds as a retirement gift for him.

“I don’t really remember going to Hockaday without [Tekle] being there,” Hoak-Morton said. “He was probably the only person that I knew was there my entire Hockaday career from day one until the last day.”

Starting as a gift from the class of 2005, the original goal was to raise $2,005. After seeing the engaged response from the Hockaday community, they raised it to $5,000, then $10,000. Finally, Hoak-Morton decided to stop raising the goal amount. In one week, the GoFundMe page collected over 1,500 donations from students, parents, alumnae and people who didn’t personally know Tekle.

In total, the GoFundMe page raised $179,103 that was presented to Tekle in a ceremony on Graduation Terrace on April 11.

“The amount is great, but the fact that so many people have given is incredible,” Hoak-Morton said.

Born in Ethiopia in 1945, Tekle grew up at a peaceful home with his three sisters. After graduating from Haile Selsassie I University in 1968, Tekle worked as a social studies teacher for middle schoolers.

“Everything was good,” Tekle said.

However, in 1974, Tekle’s life was disrupted. A civil war broke out in Ethiopia that killed his father and forced Tekle to flee to Eritrea, his father’s homeland, where he joined the freedom fighters–Eritrean militants fighting against the Ethiopian communist government to avenge his father’s death. After about six years, he learned that his mother had passed away and his youngest sister, who was 13-years-old at the time, had no one to support her. Thus, Tekle traveled to Sudan to looking for work to finance his sister and became an interpreter for immigration officers and refugees going to the United States.

The immigration officer asked, “do you want to go to the United States?” Little did Tekle know that this simple question would change his future.

After about a year and a half of working in Sudan, Tekle met with an old high school friend who lived in Dallas. Soon after, the immigration officer and Tekle’s friend made a deal that would send Tekle to the United States in six months.

Eighteen hours, two flights and one night in New York later, 39-year-old Tekle arrived in Dallas at the end of 1984.

In 1986, Tekle was hired by Hockaday to work as a security officer. What happened from then, as we know, is history.

“For 30 years, Kief [has been] the emperor of the parking lot and carpool, and for all those years, Kief has been the heart and soul of Hockaday,” Eugene McDermott Headmistress Liza Lee said. “He has given us lessons in grace, lessons in courtesy and lessons in love.”

Through his heartwarming and welcoming personality and his uncanny ability to remember the names of everyone he meets, Tekle has left a positive impact on both students and faculty alike.

Hurst doesn’t have one specific memorable moment with Kief. Instead, she remembers every morning when Kief would call her “princess” or shout out “here comes trouble” as she walked into Lower School.

“I don’t know what the school will be like without him greeting me in the hallway most every day,” Hurst said.

Lower School Head Randal Rhodus ‘97, in third grade at the time, met Tekle when he began working at Hockaday in 1986.

“You feel like [he] acknowledges your presence and welcomes you,” Rhodus said. “I think that he’s a reminder to everyone in the community here [about] the importance to stop and greet somebody and the importance to get to know someone.”

As the mother of three girls, Rhodus always feels safe dropping off her children at Hockaday finding comfort in the fact that someone like Tekle, who knows everyone in the community, protects the campus.

As a part of Hockaday security, Tekle’s jobs have ranged from watching over Tarry House, to directing the carpool line to keeping an eye on the school from the front desk at Hoak Portico.

“Kief has been very important to the students and parents of Hockaday,” Director of Safety and Security Karyn McCoy said. “That relationship has been a valuable part of the history of our school.”

Even though he will miss Hockaday, Tekle admitted that he needs a break. Tekle has not decided what to do during his retirement, but he looks forward to it nonetheless. Without the blue security uniform, he might volunteer in his church or mow his grass.

“It’s good to try retirement. If not, then maybe I come back,” Tekle said.

Although you might not see Tekle smiling and waving each day on campus, he promised that he will return for graduation and graduations to come.

“I love Hockaday. I love everyone: kids, teachers, maintenance, kitchen, housekeeping, anyone at Hockaday. They are all my best friends,” Tekle said. “Wish me good luck!”