A Less than Satisfying Taste of Trinity Groves 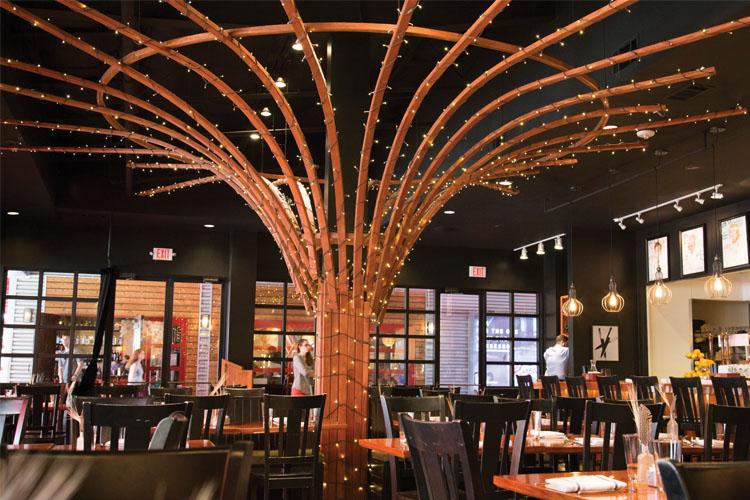 In the trendy area of Trinity Groves at the foot of the west Dallas’ Margaret Hunt Hill Bridge, Kitchen LTO sits in a long line of restaurants, each representative of a unique type of food such as sushi, Mediterranean food or tapas. All the restaurants have large outdoor patios covered with a canopy to provide some refuge from the glaring Texas sun, and each restaurant is decorated with aesthetic furniture that reflects its essence.

One immediately feels as if they are surrounded by free-spirited artists, chic entrepreneurs and hip young adults. You truly cannot miss the energy that Trinity Groves has to offer.

But Kitchen LTO has an unusual model. Even though it is a permanent restaurant, every six months, a new up-and-coming chef and local artist team up to design a new menu and redecorate the space. Currently, Nick Amoriello, who has previously worked at Nobu and Rapscallion, serves as the executive chef and brings regional comfort cuisine to Kitchen LTO. Sarah Reiss, a member of the Dallas R&R Creative Group, a marketing firm, designed the space along with the help of Amoriello, whose term will expire in August.

The idea of rotating chefs and reinventing the restaurant twice a year boldly captures the creative zeal of the Trinity Groves.

When handed a sleek menu that resembled a block of wood with intricate carvings, I only assumed that this excitement was not exclusive to the atmosphere and would be evident in the food I tasted.

At first, Amoriello succeeded in providing a delicious appetizer with a creative twist. The reinvented “Ham and Cheese,” composed of Benton’s ham, honey, pear and local cheeses, turned the classic dish into a unique combination of saltiness and sweetness that exceeded my expectations. The plate was tastefully garnished. My only complaint was that eventually I finished the dish and could not enjoy it any longer.

After a few minutes, our waiter brought our main courses to our table, which again delighted with simply the beauty of the plating. While we appreciated the aesthetic, the small portions of food on those attractive plates was not as appealing. I received just a few pieces of grilled hanger steak, while overwhelmed with the amount of sunflower sprouts.

To be honest, the sprouts looked like inedible leaflets pulled from a nearby meadow, and I struggled to decide whether I should risk even taking a bite from one of them. But after channelling the brave spirit of beloved food critic Anthony Bourdain, I nibbled on the green leaves, and to my surprise, they actually tasted quite nice.

However, every time I finished a sprout, I felt as if another ten appeared in its place. At the same time, my small portion of overcooked beef seemed to dwindle without even touching it with my fork. (While I would have preferred a heaping stack of french fries to my mountain of sprouts, I did use the sprouts to justify the huge piece of cake I ordered from another Fourcast favorite, the Cake Bar.)

Having enlisted friends and family to accompany me to Kitchen LTO, I was able to sample several other dishes on the menu such as the pork belly, the pan seared red snapper and The Burger. At first I was confused by the capitalization of “The Burger,” but when the waiter arrived with mounds of thin-cut potato chips and a massive burger, I understood the necessity of the capitalization to rightly describe this mammoth of a dinner meal.

The other two dishes, both less than satisfactory in taste and originality, failed to satisfy our teenage hunger with its small portions. However, the burger did appear to be the size of a small child’s head and practically could not fit into my mouth. Piles and piles of thin-cut baked chips spilled over the burger. This disparity was quite infuriating for our guests with smaller portions.

Overall, we were far from satisfied with our meager meal, and throughout the whole dinner, we looked on enviously at the smiling customers at the neighboring sushi restaurant. The waiters continuously brought plates and plates of tempting sushi and steaming bowls of rice to the happy guests.

For the 30-minute drive and the significant price, I recommend you go to any of the other trendy restaurants in Trinity Groves. Or at least wait until a new chef arrives in a few months.