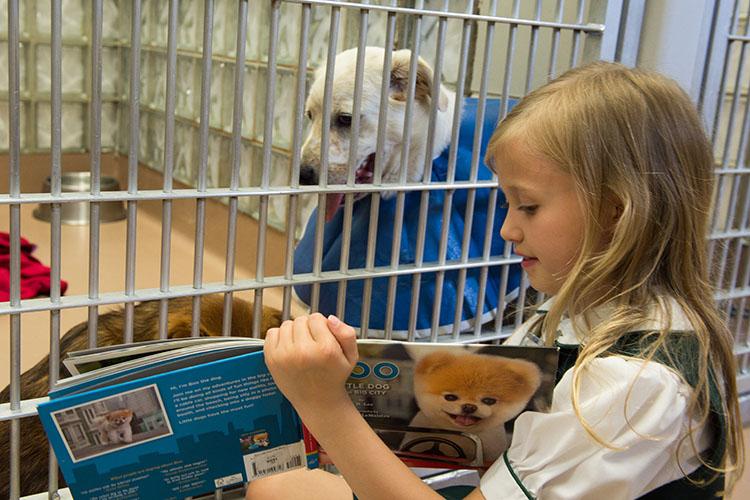 Eres Stone, a Hockaday first-grader, sat on the bed, cracked open a book and began to read.

The sound of barking filled the room, which housed sealed metal cages, but as soon as Stone and her classmates began to read, the barks subsided into silence.

Stone and her first-grade class visited Operation Kindness, an animal rescue organization in Carrollton, and read to the dogs last month.

Director of Service Learning Laura Day and Hockaday first-grade teachers decided that the theme for this year’s Lower School community service project would be animals, based on the first-graders’ animal unit for the year.

Day had read an article in early March that said that reading to abused dogs had a double benefit: children learned to read in front of a non-judgmental audience and the shelter dogs were acclimated to a non-menacing human presence.

In the article, JoEllyn Klepacki, the assistant director of education at the St. Louis Humane Society and overseer of the Shelter Buddies Reading Program, enlisted willing children aged 6 through 15 to help aid the stressed and anxious dogs.

“It was lowering [the dogs’] anxiety and they were adopting the dogs out easier,” Day said. “I called [Operation Kindness] and they loved the idea.”

Though Day organized this community service opportunity, Community Service Board member Molly Piccagli accompanied the first-graders to Operation Kindness to begin this reading program. Piccagli, currently a junior, will head Lower and Middle School Relations, a branch of the Community Service Board, in the 2016-2017 school year.

At first, the dogs were barking and acting rowdy.

“[My dog] was barking in the beginning because, what dog wouldn’t bark if all of these kids were lunging and jumping into his home, having so much fun and screaming?” Stone said.

Piccagli was shocked that the usually hyperactive dogs became calm after being read to.

“I was like, ‘No way these hyper little kids reading to them is going to calm them down,’” Piccagli said. “But when I was walking around half the dogs were asleep and sitting still.”

Overall, Day and Piccagli both feel that this program’s popularity will skyrocket in the future, for they hope to extend this program to Upper School students.

Though the trip was meant to give first-graders the opportunity to practice their reading skills, Piccagli was also surprised to see that the kids cared so much about what was going to happen to the dogs.

“There was this one girl who saw a dog who had something wrong with its eye, and she was just so worried that because of that, it wouldn’t get adopted,” Piccagli said. “I was really shocked because she took it upon herself to go find someone who worked there and ask if the dog was going to be okay.”

Looking into the future, Piccagli hopes to get the whole school involved. “I would love to have it where it’s joint trips so it’s a whole group of Upper Schoolers with the first graders,” Piccagli said.