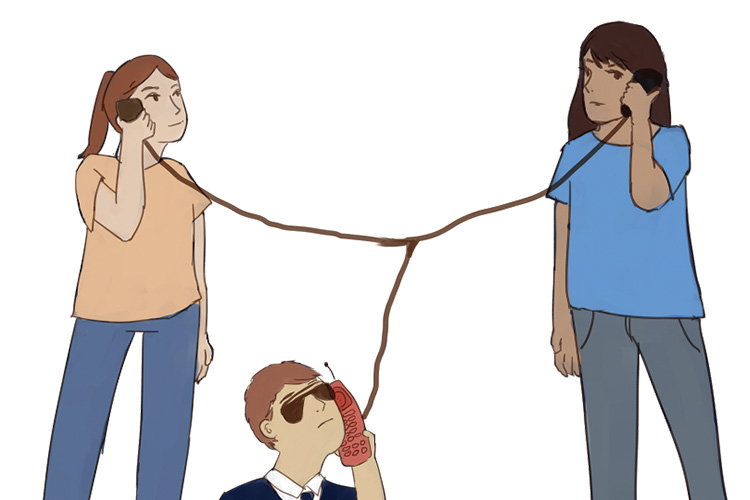 The definition of “the greater good” has been up for debate since the creation of our government. To what extent do we limit our individual rights to protect the population at large? From early journalists fighting against censorship, to present day mothers who believe in vaccine-induced autism arguing against school mandated shots, this question has endured throughout several centuries. With the creation of technology, the dispute only grew in complexity as a new argument presented itself: data privacy vs. national security.

Technology has broadened the scope of communication globally and introduced new ways we can connect with each other beyond letters and verbal messages. But even with the scientific advancements, technology based interaction shares the same core problem as offline contact: interception. While envelopes storing important information can be stolen, our data in the cloud can be lifted by anyone with access to the internet.

However, companies have taken steps to protect their consumer’s privacy by using data encryption. For example, WhatsApp, a mobile messaging app, recently updated their software to include end-to-end encryption that blocks text messages and calls from being read or heard by anyone other than the sender and receiver. As more and more terrorists use technology to plan their attacks, our government is feuding with technology companies to break the encryption software and allow unlimited access into potential suspects’ phones.

Although the privacy vs. security debate has existed in the U.S. since the 1890s, when wiretapping was first used,the controversy was brought back into the spotlight with the recent San Bernardino shooting on Dec. 2, 2015. After shooter Syed Rizwan Farook’s phone was found, government officials wanted access but could not break into his password protected iPhone.

When the FBI reached out to iPhone manufacturer Apple for assistance, the Silicon Valley giant refused. Apple believed the creation of a back door entrance into the phone would not only be an invasion of privacy, but also an invitation for hackers all over the world to break into iPhones.

The initial intention of government officials is understandable: break into the phones of known terrorists and criminals to find their network and other details about their lives. However, this simple request goes beyond just tapping into the phone of a convicted felon. The government wants to break encryption software created by companies to protect from hackers and gain access to the data of any potential suspect to prevent a crime from happening.

Government officials having access to technological data is not a revolutionary concept and is in fact quite established. In 2013, Edward Snowden exposed the NSA’s massive electronic surveillance that includes monitoring domestic telephone and internet activities.

The protest against relinquishing data privacy isn’t about letting a government official see an embarrassing selfie on your phone; in fact, it’s not even about giving up private information to the government because the truth is we do that anyway. The real argument is we need a safe environment where our information can not be stolen by hackers, and we can’t have that if the government is constantly requiring companies to find ways to break their encryption codes.

In the FBI vs. Apple case, the government dropped their case against Apple because they were able to find a third party company to break into the phone. Now aware that there are holes in their encryption system, Apple is working to fix any flaws in their software. In addition to Apple, many other companies are also working to strengthen their customer data protection. Microsoft is suing the Justice Department over secrecy orders that ban the company from telling their customers when their emails will be searched while WhatsApp is using encrypted messaging software.

While it might seem stubborn or ridiculous that technology companies are refusing to let go of consumer data protection for matters of national security, it is actually exactly what customers should want from these businesses. Regardless of what your views are on the Fourth Amendment and if citizens even have a right to privacy, unlocking software codes means creating an entry point for anyone in the world. When they give the government access, they also create an opportunity for hackers around the world.

No one wants their software provider to be creating new ways to break into encryption that protects bank account information, social security numbers and a host of other gems for identity thieves. At the end of the day, we give up enough of our online privacy for the government so, please, let us keep our iPhones for ourselves.