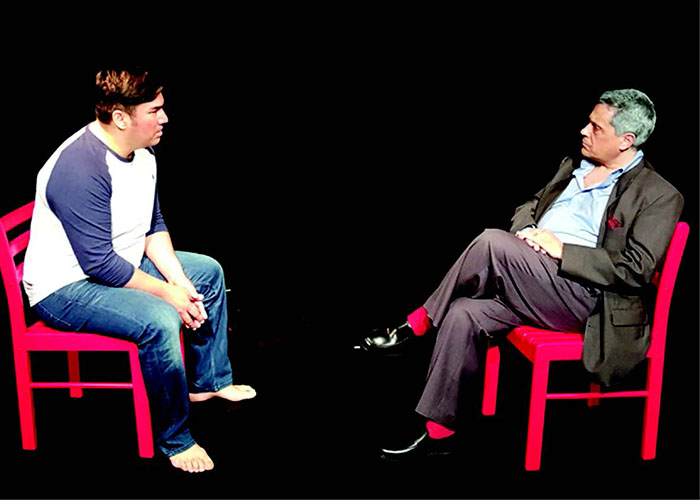 The lights come up. They reveal a simple scene, glowing in the midst of a dark black-box theater. One man, dressed in all black, faces the audience. The only other color on the set comes from the two bright-red chairs, so vivid in the otherwise monochromatic stage that they screamed for someone to come sit on them. Meanwhile, in the audience, one of the directors sits excited and nervous, watching the scene commence. “Are the lights bright enough? Are the actors remembering their lines?”

For the first time in her theatrical career, Mariana worked alongside her mother Beatriz Mariel to co-direct a play called “Las Heridas del Viento.” This opened on April 22 and was also performed on the 23, 29 and 30 at the Bathhouse Cultural Center near White Rock Lake.

Up until this point, Mariana, who considers herself a “self-made actress,” had always performed for the audience, onstage, in costume and stage-makeup.

Both Mariels are part of Cambalache Teatro, a Spanish community theater group that, according to Mariana, comprises Latin Americans who love to act and put together productions that are both simple and emotional. Along with three other friends, the two women founded Cambalache Teatro en Español in 2008.

“We all love the theater, but none of us can do it professionally,” Mariana said. “This is our secondary ‘job.’ Through our own workshops and trial and error, we have learned what we know today. It is a different way to get to do what you love.”

Out of the six plays they have produced, “Las Heridas del Viento” is the third one Cambalache Teatro has performed from Spanish playwright Juan Carlos Rubio, and one of his biggest productions.

Even though they perform twice a year, spring and fall, at the Bathhouse Cultural Center, for the past two years Beatriz has directed the actors – including her daughter Mariana – in performances of Rubio’s short one-act plays during the summer.

“We performed those in homes to make money for our non-profit theater over the summers,” Mariana said. “We would set up a living room to look like a stage, bring lights, perform and take a donation from the audience.”

“Las Heridas del Viento” revolves around David, a young man who never had a close relationship with his deceased father. While looking through his father’s old possessions in search of some element of humanity, David discovers a box of his old love letters. To his surprise, these letter were written by a man, Juan.

“It’s about the relationship being built between this young man trying to find humanity in his father and this other man who is all about humanity,” Mariana said. “I fell in love with the characters and the emotion.”

For Beatriz, the simple yet powerful stage direction of the play drew her in. “The interpretation is what attracted me to this play. On stage there are two characters alone with a very simple scene,” Beatriz said. “We wanted the audience to concentrate on what was happening between these two characters. This is, in reality, what attracts me most when I direct, not only in this play but all others.”

The rehearsal process began in February, with the Cambalache cast rehearsing 11 hours a week. During production week, the week leading up to the performance, the cast rehearsed at the Cultural Center seven hours a day, three days a week.

“We’re very laid-back when we’re rehearsing because we’re very good friends,” Mariana said. “We do some concentration exercises for the actors, or relaxation because you come from a hectic day. Then we go straight to rehearsal, going over lines, scenes, the whole play, depending on what we need to do.”

However, this rehearsal time period was shorter than usual, as the cast usually starts four to five months before a performance. This proved to be a challenge for the group. Daniel Chamero, one of the founding members of Cambalache Teatro and the actor playing the role of of Juan, recognized this.

“Every play is a challenge, but in this particular case, the big challenge was the lack of time,” Chamero said. “I had to travel overseas for two weeks while we were rehearsing, so we had to wrap it up quickly.”

Meanwhile, Mariana grappled with her own challenges as she took on the role of director for the first time. For her, the hardest aspect of directing was focusing on the development of the whole story and the whole play.

“I have always acted and created my own character. I love reading plays and dissecting a character to give life to it,” Mariana said. “Now, I am trying to figure out how to tell a story as a director. Instead of telling the story of one character, now i have to tell the story of all of the characters.”

For her, creating a scene is like choreography; the director must piece together the human interactions between the actors with their surroundings, like the furniture and the lights.

“I’ve always seen it, but now I am picturing it all and being in charge of the whole image,” Mariana said.

Mariana, though, was not alone during her directorial debut. Since she co-directed with her mother, she was able to glean off Beatriz’s hefty experience as a director as well as fuse their mother-daughter relationship in a new environment.

“I was very nervous going in, because with mother-daughter relationships, it’s easy to argue with Mom,” Mariana said, laughing. “I wanted to respect what she knows because she’s been doing this for a long time, and I hoped that I could bring something to the play so together we could create something.”

Beatriz, however, was more relaxed knowing she had her daughter working with her. “She has a lot of potential to be a good director,” she said. “Her experience as an actress helps her guide the actors to prepare their characters.”

Likewise, Chamero believed that Mariana fitted in her new role “perfectly.” The fact that Chamero and Mariana had been working together since 1997, and thus understood each other’s strengths and weaknesses, also facilitated the production Process.

Looking forward, Mariana is open to directing another play, although she still prefers acting a little more over directing.

“I just think you need to do everything at least twice,” Mariana said. “The first time is such a learning experience that you don’t know if you like it or not. The second time, you come in with a little more knowledge, so after that you can make a decision. It makes me realize how much I don’t know, and makes me want to go learn more.”