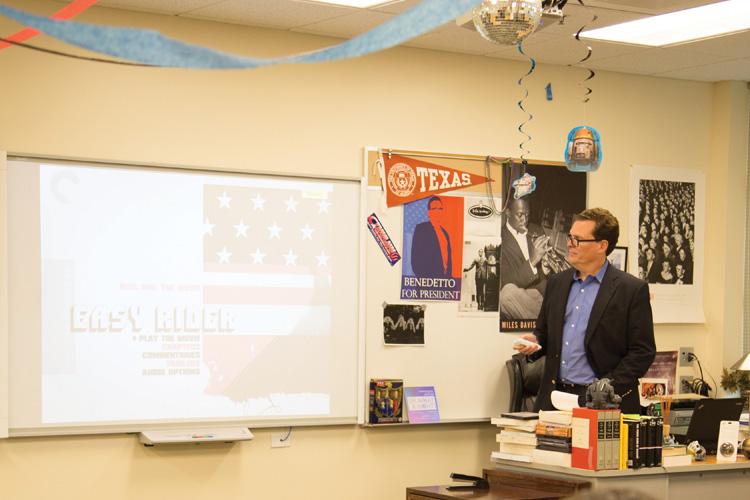 It took him by surprise.

Upper School history teacher Lucio Benedetto was walking down the senior hallway when the Student Council seniors stopped him and asked if he had a moment to talk in private. They led him into the history department office.

“They said to me, ‘You’re in trouble, but it’s good trouble,” Benedetto recalled, laughing. The seniors were right – it was good news. In the privacy of the history office, Benedetto was informed that the senior class had taken a vote, and he had been selected as the faculty speaker for the Senior Farewell and Reception on May 26.

This year marks the first time seniors were allowed to elect a faculty speaker for their reception. Traditionally, the Head of Upper School speaks. However, as Terry Murray has only known the seniors for one year, it was decided by the Upper School administration that seniors could pick someone they have known for a longer period of time.

Yet this wasn’t the first time the Class of 2016 had chosen Benedetto for something important. When they were juniors, he starred in their “Blue Period”-themed Form Day skit as Picasso. More recently, Benedetto was voted to be the teacher present for the traditional senior retreat campfire talk at Allaso Ranch and was featured in the seniors’ prom theme video.

The campfire talk, in which the senior class gathers to share stories, feelings and in some cases, apologies, was a particularly fond memory for Benedetto.

“To be the faculty member that’s chosen for that was pretty special,” Benedetto said. “I came away from it both respecting the seniors and feeling proud to have been invited to be part of such a personal experience.”

Benedetto suspects that his close relationship with this year’s senior class may be due to the fact that he taught three AP US History courses last year rather than the usual two. He also interacts with the seniors through his two senior courses, Philosophy21: Thinking for the 21st Century and American Dreams and Nightmares: A Cultural History of Postwar American Film.

However, regardless of the reason, it’s safe to say that Benedetto and the Class of 2016 share a special bond. Benedetto enjoys their free-spiritedness and individuality. He is especially keen on their never-ending compassion for one another.

“They’ve really cared for each other over the years,” Benedetto said. “I think [the Class of 2016] really is a standout since I have been here as a class that has really supported one another.”

Senior Berkley Wood has been in Benedetto’s advisory since her sophomore year, and was ecstatic when she found out he had been voted the senior reception speaker. Wood believes that not only do the 2015-2016 seniors support each other, but that Benedetto also supports them.

“He is a major advocate for our grade,” Wood said. “I feel like if I had to approach a faculty member on anything it would probably be him, just because he’s so accepting of everyone.”

Benedetto’s support for the senior class has not gone unnoticed by fellow faculty members. Rebekah Calhoun, Form IV Dean, has observed his willingness to step up on behalf of the seniors.

“If he feels like they’re not having a voice, he’ll step in and offer ideas or suggestions or share their concerns, at least with me,” Calhoun said. “He’s there to support them.”

As a senior advisor, Benedetto is also seen by the seniors as a close confidant as well as a supporter.

“I could go in at any point in time to start a conversation, and he would be so engaged,” Wood said. “He prioritizes his students and I think that’s so important.”

Benedetto simply sees it as his duty to advocate for the seniors.

“ I [have] a responsibility to take their voices to the administration, and not only be another administrative voice,” Benedetto said. “This is a class that really wants and deserves to be heard.”

A self-described introvert, he did admit to being afraid to speak at the reception. Yet he was also extremely honored to have been picked, especially by a senior class that he regards as truly unique.

“They don’t just tolerate difference, like we’re often taught to, but rather embrace the differences within their group,” Benedetto said. “I think that makes them special.”