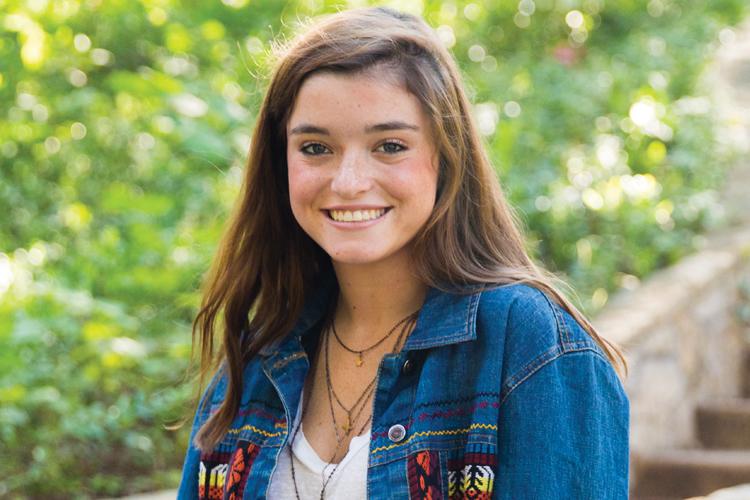 When junior Grace Voorheis was asked to take photos of the children she babysat in January of this year, she arrived at their house with her Nikon D3300 and assumed she would just be taking a few quick shots of the two girls, ages 2 and 4, for the family’s annual Valentine’s Day card. She was wrong.

When she got there, she found the two girls dolled up in big puffy dresses and adorned with various fuzzy clips in their short brown hair. Their mother asked Voorheis to photograph the two girls holding various children’s books, including the classic “Winnie the Pooh,” as if the two were reading – though neither child was old enough to even recognize the words on the page. The two young girls squirmed and picked their noses as Voorheis began the shoot.

“Out of the 200 pictures I took, there were four good ones,” Voorheis said.

Following the shoot, the family paid Voorheis $200, and this became the first official photo shoot of her new photography business.

While student entrepreneurs have graced the Hockaday hallways since the 1913 establishment of the school, Voorheis, as well as sophomore Lauren Puplampu, have filled a unique niche market: taking senior portraits and family photos. These two students have offered their services to fellow friends and families in Dallas, and both charge significantly less than their professional counterparts, allowing them to provide quality shots to their peers without the enormous cost.

Voorheis started taking photos in middle school while living in Costa Rica, where she was the only member in her school’s photography club. However, it was not until high school that she started taking portraits after noticing the high cost of professional photographers.

“Since [senior portraits] are so expensive, I started taking those for my friends,” Voorheis said.

Puplampu also started her photography career in middle school while at Good Shepherd Episcopal School. Many of her friends started purchasing DSLR cameras, and Puplampu wanted to follow the trend. She then started playing around with the camera and fell in love with the art form, prompting her to go on a Rustic Pathways Photography Trip through Cambodia, Laos and Vietnam.

On the trip, Puplampu asked her two leaders, both professional photographers, how to start her own photography business for profit. Puplampu said that the best advice she received was to “start taking pictures of your friends, and as you develop your portfolio, then you can start to charge at a price you set.”

After this trip, Puplampu followed their advice and took pictures of two sophomores at Ursuline Academy. Her portfolio then attracted new customers, such as sophomore Camryn Dixon’s family who asked Puplampu to take their Christmas card photos.

“It was slightly embarrassing having [Puplampu] witness the weirdness of my family and how we acted together,” Dixon said. “But I can say that it did result in some really hilarious pictures.”

According to SmartShoot’s 2015 Photographer Pricing Survey of over 250 photographers, the average photographer charges $954 for portraits. Voorheis charges $300 and Puplampu charges around $50 per photography session depending upon the specifics of the shoot.

Upper School photography teacher Janet Yoshii-Buenger applauds the work of her two students in this endeavor and says that “both of them are very good photographers.”

An artist herself, Yoshii-Buenger notes that some artists feel that commercial photography “is against their soul” but others find it as a good way to both make money and pursue their passion. She too has sold some of her own pieces such as her black-and-white photos.

Although both have learned valuable skills through their photography businesses, a career in photography, however, is not the end goal for neither Voorheis nor Puplampu.