STARS of the Summer 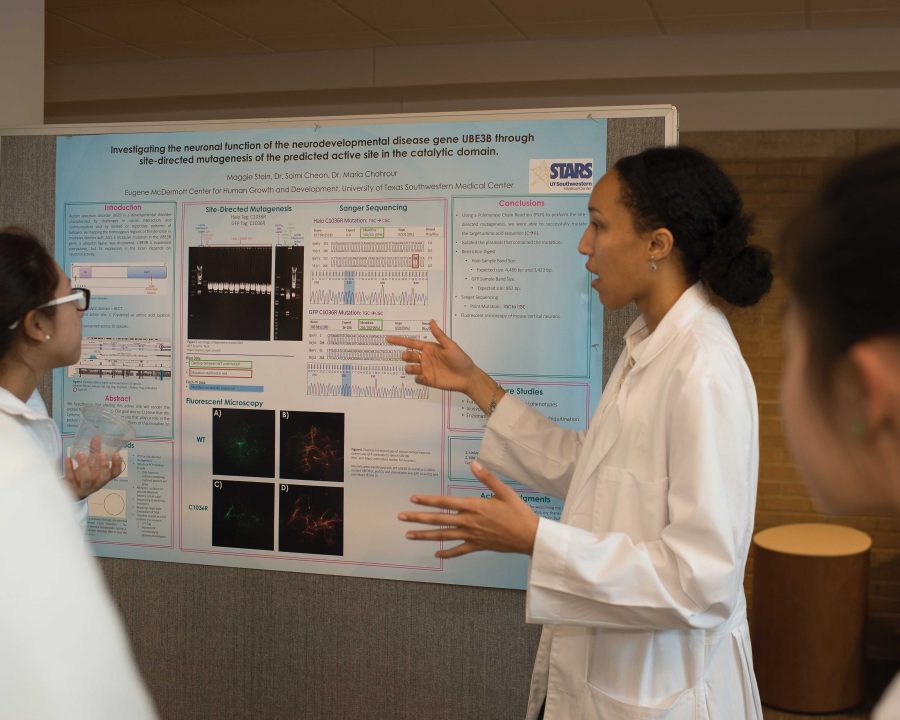 Neha Kapoor took a deep breath as she walked into the Hockaday Upper School conference room last February. Her father sat beside her for support and across the table from her sat a man and a woman in professional attire. They were ready to start a conversation. In her head Kapoor, a junior at the time, went through all the questions she was expecting to be asked during this interview. Introductions were made and the interviewers asked their first question.

“Could you tell us a science joke?” Kapoor was taken aback. She paused, unsure of how to respond.“ Did you hear oxygen went on a date with potassium? It went OK.” Kapoor responded. The interviewers cracked a smile.

Kapoor was interviewing for The Science Teacher Access to Resources at University of Texas Southwestern, better known as STARS, a summer research program developed by UT Southwestern Medical Center for high school juniors who show high levels of interest or have achieved academic recognition in science. It is an opportunity for rising seniors to work in a fast-paced lab environment on cutting-edge projects. Every year, a few Hockaday students are accepted into this highly selective program, along with many other rigorous scientific summer research opportunities that the Hockaday science department recommends. The application process for the STARS program is rigorous and has many steps. Applicants must first submit an essay, standardized test scores, and and letters of recommendation. Applications are reviewed by science department faculty and ve to six candidates are selected to be interviewed by STARS administrators. From this pool, one to three girls from Hockaday are accepted into the program.

Once accepted into STARS, students are assigned to a lab based on their preference for a certain topic or field of science. No two projects are the same. Samantha Taussig ’16, for example, spent the summer of 2014 at STARS working on a clinical case study that focused on club feet. Heather Xiao ’16 worked in a lab that studied psychoneuron endocrine systems while writing a paper with her mentor on the connection between bipolar disorder and alcohol abuse.

Just because the participants are young doesn’t mean that they’re not doing important work.

“The research done at STARS is actual research that actual scientists use,” Kapoor said.

hold students to certain expectations in the lab. The program strives to simulate an environment that will prepare STARS scholars for careers in their adult lives. An average day at STARS would begin at 8 a.m and end at 5 p.m. with a lunch break squeezed in during the day.

After the STARS program ends, those who were a part of it walk away with a newfound feeling of confidence and self-assurance in their ability to perform in a classroom setting.

Those who participated in the STARS program may have spent most of their day in labs but many memories were made outside of the research.

Senior Wendy Ho is an advocate for STARS and summer research programs everywhere. “If you think you want to go into science as a career or even if you’re just casually interested in science, it definitely gives you a different outlook on learning.”

Dr. Kim Orth is the mother of Samantha Taussig ‘16, a Professor in the Department of Molecular Biology at UT Southwestern Medical Center.

“STARS students are very curious about science and how to set up experiments,” she said. “They want to know about future options in science and medicine.”

“I like to mentor students by making them work out problems in their own minds,” she said. “Although I may know the answer for a question that I ask, I only provide them with the information they need to know so that they can gure out the answer for themselves.”

Dr. Barbara Fishel is a faculty member of the Hockaday science department. She helps choose STARS applicants, and is always searching for diverse research opportunities that Hockaday students can participate in.

“STARS, as great as it is, is not the only program and is not for everybody,” Fishel said. “I think it’s important for everyone to realize that just participating in any kind of research program, if that’s something that interests you, doesn’t matter where it is. It’s worthwhile to do.”