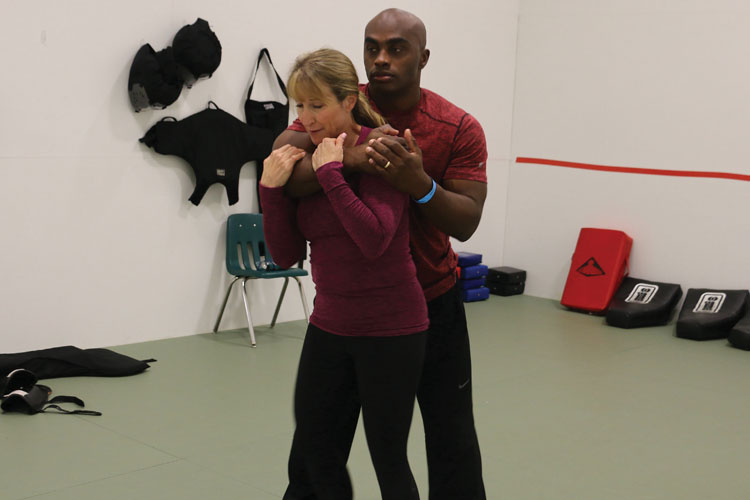 On Sept. 2, images of former Stanford University student and convicted sex offender Brock Turn- er appeared everywhere from news sites to social media outlets as the Santa Clara County Jail released him to a crowd of photographers and protesters, after Turner served just a fraction of his six-month sentence for sexual assault.

However, months before this highly publicized case, Hockaday alumna Daly Montgomery ‘12 attempted to address the problem of sexual assault on college campuses by creating a self-defense course during her senior year at Stanford, called “Protecting Your Bubble.”

While many self-defense courses focus solely on physical skills to prevent an attack, Montgomery’s course also emphasized the importance of instinct and confidence in mitigating a threat.

“One of my goals in the class was not necessarily to teach a lot, but to have a lot of student discussions, to show my students that self-defense is not something that somebody needs to impart on you,” Montgomery said. “Self-defense is something that, especially as women, we already know a lot of instinctually.”

Montgomery tested her new course in the winter quarter of last year, teaching the over 20 Stanford students who enrolled, and due to its initial success, she offered two sections of the course in the spring quarter to 25 more students. Each class comprised of two sections: first a group discussion followed by a demonstration of practical defense techniques, such as targeting the eyes and throat to incapacitate your attacker.

Madeline Sacks, a current senior at Stanford, enrolled in Montgomery’s class to nd ways to empower and protect herself due to her small stature. However, one of the main lessons that Sacks learned from the class was not necessarily the specific moves, but rather she“learned that [she has] a lot of shared experiences of feeling unsafe in certain situations as other women.”

In addition to group discussions and defense techniques, Montgomery, after recognizing that many of her students did not know Stanford’s speci c policies regarding sexual assault, dedicated one class to discussing the U.S. Department of Education’s Title IX, a law preventing discrimination based on sex in educational environments, as well as its enforcement at Stanford.

Montgomery, who joined the Marine Corps this year, had the idea to create a self-defense course at Stanford after a fellow dorm resident spoke up about an instance of sexual assault. After inquiring whether her friend would have known how to protect herself, Montgomery rst realized the importance of her self-defense experience, including 13 years of karate lessons and Hockaday’s required self-defense course.

Thus, Montgomery set out to educate her peers, drawing much of the curricu- lum for her course from Upper School self-defense teacher Meg Hinkley’s senior-level course.

Hinkley, recognizing the multitude of threats in the world, believes that learning self-defense is as important as learning how to swim.

“It would be ridiculous for me to send my children—my son and my daughter— out into the world with never having taught them how to swim,” Hinkley said. “Even if they said ‘I don’t care about swimming and I never want to swim,’ well you never know when you will fall into a body of water. To me, it is the same thing as self-defense.”

According to the National Sexual Violence Resource Center, one in ve women and one in 16 men are sexually assaulted while in college, and although the numbers of victims of sexual assault continue to grow, 40 percent of colleges and universities reported that they had not investigated a single sexual assault charge in the last few years.

While Montgomery acknowledges that Stanford has begun to o er support to victims of sexual assault, she believes that the mental health resources and self-defense education are still inadequate.

“I think something universities should do is come at the issue [of self-defense education]. A lot of people talk about sexual assault as a women’s issue and about survivor’s’ rights, which is important,” Montgomery said. “But [we need to be] educating and somehow really putting an emphasis on a culture of consent and treating sexual assault culturally as not necessarily as something you deal with after it happens but something that can be prevented.”