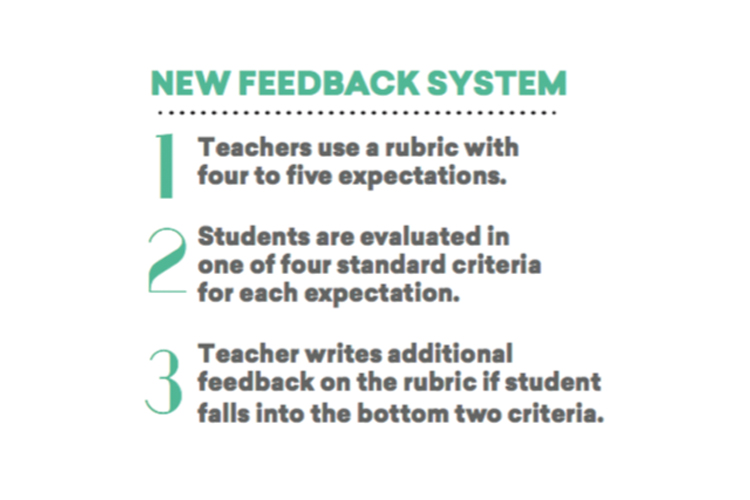 It’s the final loping stretch of the quarter. For a student, this is a promising time. The many laborious weeks’ worth of dedication will finally speak for themselves as grades are published, a day that is awaited with much anticipation. For a teacher, on the other hand, the end of the quarter means only one thing: countless hours spent composing paragraphs upon paragraphs of comments for every student they teach. However, this process is about to change.

In previous school years, teachers were required to write comments for their students twice a year.

Upper School math teacher teacher Jessica Chu was not in favor of this system. “Let’s say I have 80 students, then I have to write paragraphs for literally 80 students,” Chu said, referring to the previous comment system.

Chu is not alone in her opinions, as all teachers experience the struggle of writing many paragraphs of comments for their students. According to Chu, the biggest disappointment to teachers is knowing that some students do not even take the time to read these comments that they slave away writing.

“Is my work valued?” Chu said.

The excessive amount of time that writing comments requires from teachers is only one of the many reasons that the comment system was improved this past summer.

At the last faculty meeting of the 2015-2016 school year, the idea that a new comment system be implemented was formally proposed. Once it was agreed upon that this system be put in place, a committee, composed of Chu along with fellow  Upper School faculty members Tracy Walder, Alejandra Suarez, Christie Sullivan, Jennifer McEachern and Jen Fore, met regularly over the summer to brainstorm and research other effective systems in order to make the new one as efficient as possible.

While conducting this research, Chu and her team learned that the Lower School uses a checklist-like system in which expectations of what a student should achieve are listed. Students are then evaluated on their ability to meet these expectations. The updated system to be used for Upper School is partially based off this idea of expectations and checklists.

The new Upper School feedback system comprises of a rubric which includes each department’s expectations. From this point on, teachers will assess each of their students and place them into one of four standard criteria: exemplary, proficient, progressing and experiencing difficulty.

A “comment” from the teacher will not accompany this rubric unless a student falls into one of the two bottom tiers, “progressing” or “experiencing difficulty.” In that case, the teacher would then write a few short sentences of additional feedback to the student, addressing the issue, but more importantly, instructing the student on how they can improve and surpass this area of struggle. This rubric system will ultimately replace the comment system as a whole.

Upper School history teacher Tracy Walder, who partook in the feedback committee this past summer, said that the whole idea of the feedback system is to show a student that there is more to it than just their grade. She, along with many other faculty members, believes that the previous comment system was simply a justification of a student’s grade, as opposed to an explanation of what the student could improve on.

“It’s great to know why you have a C, but how can you do better?” Walder said.

Another fundamental change is the fact that comments will be more personal. Teachers will write additional feedback directly to the students, as opposed to writing a third-person, narrative-like comment about the student.

“We as teachers realized that we were trying to appease every audience possible,” Chu said, referring to the large number of eyes that comments generally tended to cycle through.

In addition to these changes, feedback will not come out at the same time that grades do. In previous years, comments and grades were published at the same time. Grades will now be published one to two weeks before feedback. This not only allows grades to be released faster, but also gives teachers more time to work on the feedback section, and, if needed, give thoughtful responses that will help the student improve their performance in the classroom.

With the old system, a lack of authenticity in comments was one of the major challenges that teachers faced. By simply stating how a student was performing in class, comments tended to end up identical. With the updated system, the additional feedback section will instruct a student on how to improve upon their performance, overall adding an authentic feel that previous comments lacked. Because all teachers have the same standard rubric format, it will ultimately allow them more time to spend constructing genuine additional feedback unique to each student when necessary.

Students across Upper School have varied opinions about the new system. Freshman Francesca Starkie is in favor of it, and feels that the implemented changes will be more effective than the previous system.

On the other hand, sophomore Maddie McBride feels partially indifferent towards the system. She believes that the separation of grades and feedback will have a reverse effect on students, causing them to focus more on the letter grade itself and less on the feedback.

“Since grades will have already come out when feedback is published, I think that students will only glance over the feedback, and not read it very thoroughly or take into account what it actually says,” McBride said.

Although the system is directed towards students, the change will affect parents as well. Hockaday parent Roh Rohrich is in support of the system, and believes that the idea will be a success.

“I think it’s a good idea. It doesn’t leave any room for a lack of interpretation, and the student gets to see exactly what the teacher says,” Rohrich commented.

Because only three months of summer vacation were used to develop the system, it is expected that it may run into bumps along the road. Head of Upper School Terry Murray acknowledges the fact that improving the system is a progress that takes effort and time.

“The goal of updating the system was to create a program that could, over time, grow and adjust to the needs of the community,” Murray said.