Newcomers on the Court 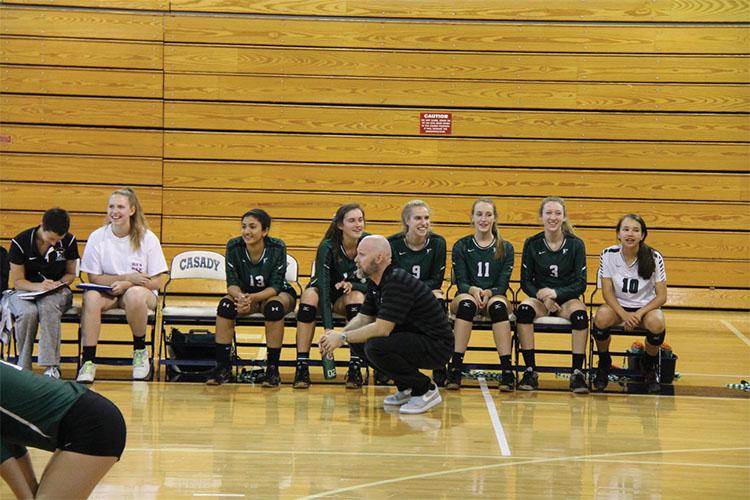 The screech of the shoes on the gym court, the slap of the volleyball onto girls’ arms, the screams from the excited crowd: familiar scenes and sounds during a Hockaday varsity volleyball game. But one thing that has not been seen since 2007 is present this year: a male coach.

New to the Hockaday volleyball pro- gram, but de nitely not to volleyball, coach Andy Gass is cheering on the team and coaching them on the sidelines.

Gass has 24 years of experience, having started playing volleyball since 1992. He has played on the University of North Texas Men’s Club team from 1995-1996 and has been coaching since 1997.

Gass brings his club volleyball experience to Hockaday. In 1993, he founded Summit Nitro in Plano, an elite volleyball club which teaches the complexities of the game as well as life skills.

“Thus far, the season has been going well,” Gass said. “We have had some ups and some downs, but I am really proud of the team and how they have responded to the new coaching staff.”

Junior Camryn Dixon, a Hockaday varsity team member who is an outside hitter, has seen first hand Gass’ top-notch club as she played at Summit Nitro along with her brother Parker this summer.

“Overall, I had a very positive experience at Summit Nitro that not only helped me grow as a volleyball player but also as a teammate,” Dixon said. “Coach Gass is incredibly different than any coach any of us on the team have had before. He completely re-taught the way we think about the game and is focused solely on perfecting our technique. Our practices are more e cient and driven than last years’ were.”

Gass is not the only newcomer to the Upper School volleyball family. A new assistant coach was hired for the varsity team: personal trainer Jenny Francuski. Not new to Hockaday, Francuski was the former Middle School coach, and this is her rst year as an Upper School coach.

Francuski played the sport for 22 years. Her volleyball team experience started in high school and continued at William Jewell College, a liberal arts school in Missouri, but a third injury forced her to quit. She never stopped enjoying the game though; for the past 13 years she has been playing beach volleyball with her husband.

Francuski said that Gass has brought a lot of varying drills and techniques that have not been seen on the Hockaday courts.

“We are learning a di erent system of play,” Francuski said. “We have introduced conditioning and lifting. All the drills are new to us.”

And according to Francuski, the attitude towards the game will help the girls- succeed in future games and tournaments.

“The drills are very stress-driving. It’s all about how you are going to react under pressure. All of his game decisions and practice decisions are about if we are going to win a game,” Francuski said.

Gass takes his job very seriously. During practice, he constantly reminds the girls not to fool around, emphasizing that practice exists only for volleyball and improving at the game.

“He showed us that he wasn’t messing around and that he was here to turn the Hockaday volleyball program around,” Dixon said.

Gass has a positive outlook for this coming season.

“I feel that we are getting better every time that we step out onto the court and have made huge leaps since the beginning of the season,” Gass said. “It’s all about the process and the season is a marathon, not a sprint.”

Change is not always welcome in sports, since some like to stick with tradition and techniques that they know work. It’s not the case, however, with Gass and Francuski. Whether it’s the new coaching, new practice rules, or new training techniques, as Dixon said, “It’s working.”