Ceramics Steps It Up 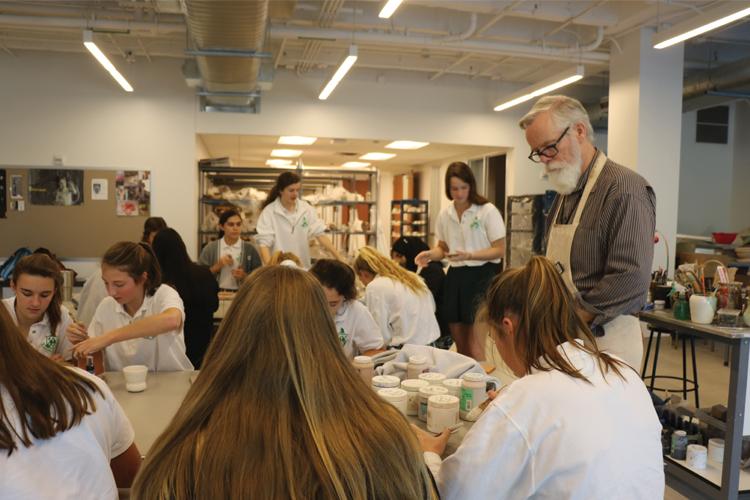 Not many people can say that they have had their artwork shown in a renowned collection, but now 38 Hockaday ceramics students can proudly add this feat to their resumés.

An exhibit at the Trammell & Margaret Crow Collection of Asian Art titled “Clay Between Two Seas: From the Abbasid Court to Puebla de los Angeles” gave Hockadaisies from beginning and advanced ceramics classes the chance to display their hard work for all of Dallas to see.

The exhibit, which was put up on Sept. 21 and will continue until Feb. 12, features an installation of 210 tiles in a special community mural made by ceramics students from six different schools in the Dallas area: Henry B. Gonzalez Elementary School, Montessori Children’s House and School, Plano Senior High School, Singley Academy, Skyline High School and The Hockaday School. The community mural was shown from Oct. 21 to Dec. 3.

Each tile was made in the Talavera style, a particular pottery technique that comes from Puebla, Mexico and is distinguished by its unique white glaze. Javier Espinosa Mómox, a well-known Talavera ceramist from Puebla, visited the Hockaday ceramics studio on Sept. 21 to lead a ceramics workshop. During his visit, which was facilitated by The Crow Collection, Mómox showed off his own work and taught ceramics students how to make tiles in the Talavera style.

Ceramics student and senior Emily Stallings was grateful for the experience to learn from Mómox.

“I definitely appreciate the skill and hard work that he puts into his works, so seeing him do it firsthand was really awesome,” Stallings said. “It was really cool to actually do it and try it for ourselves.”

Upper School Ceramics teacher Kevin Brady took his students on two field trips to see the community mural. The first group visited the Crow on Nov. 15 and the second group visited on Nov. 17. Stallings was part of the first group and loved seeing her own tile on display.

“When you walk by it’s like, ‘That’s so cool, people get to see what I made!’” Stallings said. “Everyone in the class was looking for theirs, and it was really cool to see it.”

Looking at his own students’ tiles, Brady was just as dazzled by their work as he was by Mómox’s.

“They have more creative ideas than they give themselves credit for, and they’re learning to take risks and to act on their creative ideas,” Brady said.

In a collaboration facilitated by the Crow, Hockaday ceramics students will soon be working to create plates with autobiographical imagery on them. They will then exchange with ceramics students from Skyline High School. In mid-January, there will be a luncheon at the Crow where all of the students will come together and eat food off of the plates that they have made.

“There’s an amazing family connection with the Crow family and Hockaday,” Brady said. “They’ve always been very generous with the school.”

Sanders believes that this project was a priceless experience for Hockaday ceramics students.

“It connects the girls to the art that they’re making in a living, meaningful way that’s beyond the walls of the studio,” Sanders said. “It’s a wonderful thing to be able to start experiencing that in a protected space.”