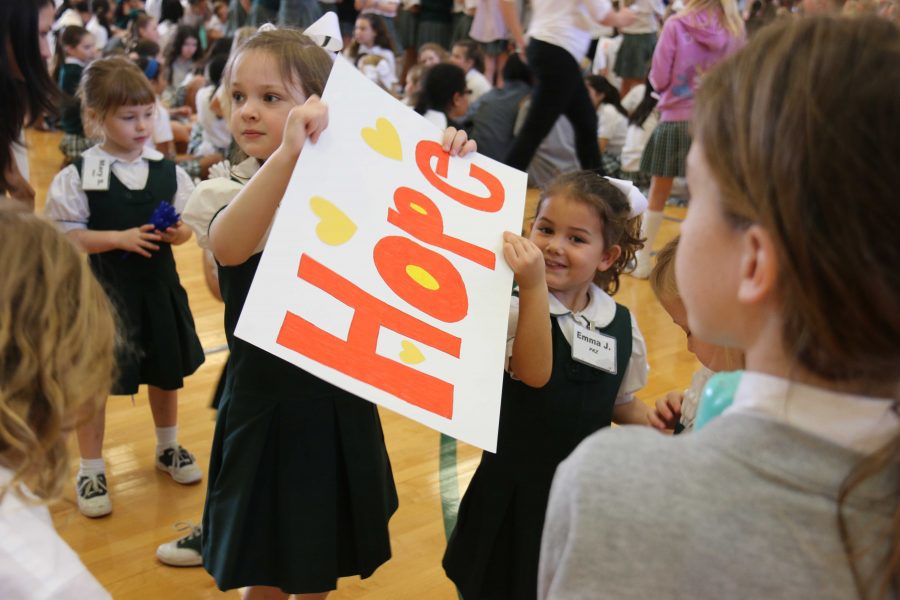 On Feb. 7, the Athletic Board hosted the second spirit rally of the year in honor of the Winter athletes heading to SPC this weekend. Students were greeted by girls in snowmen costumes and given blue and white clappers.

Unlike previous rallies, this one had a specific theme “Ice the Competition,” in spirit of the Winter sports season. Athletic Board Chair Natalie Hoffman said she hoped to promote more spirit and excitement with this new idea.

“We wanted to do something different and to really stick with [the theme] and make it fun!” Hoffmann said.

After the athletes were welcomed in with roaring applause, Hoffmann commenced the spirit stick competition. One pair from each form was asked to team up. The goal was to unwrap the frozen t-shirt as quickly as possible, while the other partner stood in a bucket of ice.

The teachers were victorious, soon followed by the juniors and freshmen. But in the end, the teachers traded the coveted spirit stick for a faculty free dress day and re-awarded the prize to the seniors for having the most spirit.

The rally was concluded with a presentation from the House Council. Head of the Residence Department Meshea Matthews challenged the student body to participate in the largest love train ever formed.

“Love Train” by the O’Jays started playing in the background, as Matthews described the purpose behind the challenge: to join together and promote unity.

Members of House Council went into the crowd, pulling Lower School students first and attaching to make multiple trains. Students and faculty attached on as the trains grew, traveling all across Penson gym.

After some time, there were a few long trains spread across the room, joining students from all grades and the faculty and staff together in a show of unity and love.