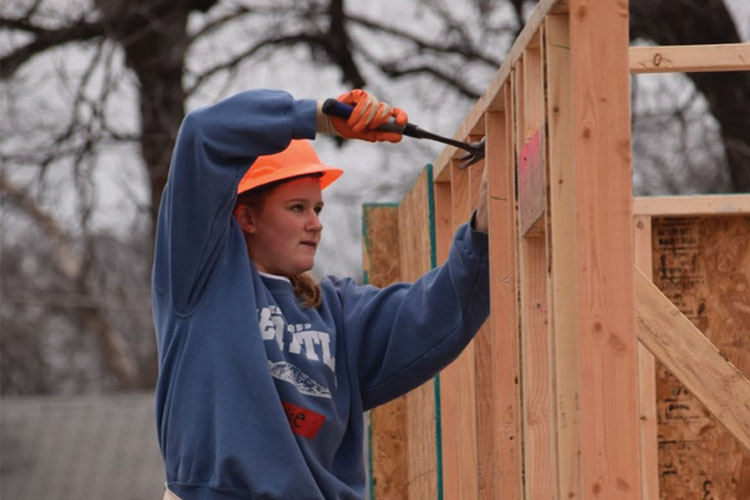 Whether it was on a pile of wood beams, at the feet of a dozen people who were hammering together the side of the house or in the storage shed, wrapped in a blanket, she could fall asleep anywhere. She was always in the way of the task at hand, and she would only move from her spot if someone carried her in her arms.

Supposedly half boxer, half German shepard, this nameless, collarless dog from McBroom Street in West Dallas, charmed the volunteers and future homeowners who were working on the build site.

On Jan. 21, students from both Hockaday and St. Mark’s began to assemble a three-bedroom, two-bathroom house on 1735 McBroom Street through the Habitat for Humanity program.

Since Habitat for Humanity Board Member David Michel, father of Elizabeth Michel ‘15 and St. Mark’s’ John Michel ‘10, brought the project to Hockaday a decade ago, students have come together from both schools to build a home for a family in need of housing stability.

For the 11th house sponsored by Hockaday and St. Mark’s, Habitat for Humanity selected the Cruz-Rivera family as the owners.

Juan Rivera and Sandra Cruz first learned about Habitat through their friend, whose in-laws were habitat homeowners.

“At first it all sounded too amazing and I didn’t believe it was true, but I thought I would just try it,” Rivera said.

Habitat told the Cruz-Rivera family that the entire process usually took anywhere from six months to a year; however, only five months passed from Rivera’s first communication with Habitat to the first day of their build.

“The whole process was so fast. It only makes sense to call it a blessing,” Cruz said.

In order to be selected to be a Habitat homeowner, one must demonstrate a need for safe, affordable housing as well as a drive to build a better home and future for themselves and their families. Once selected, homeowners must take homeownership and financial literacy classes, volunteer at a Habitat ReStore warehouse or help build their own home or someone else’s in order to fulfill the required 250 “sweat equity” hours.

Because Habitat works to provide people with both stability and self-reliance, Habitat Homeowners still pay their affordable mortgage, which is cycled back into the community to help build additional Habitat Houses.

Parents of four young children, Jesus Cruz and Sandra Rivera, currently rent a one-bedroom apartment, which provides little room for them to spend time together in their own home. With all their children being under 8 years old, Cruz recognized the importance of giving his family a better home.

“I want to be able to show them that I bought and built this house for them, so that one day it will be left to them. I hope this shows them that one day they too can be homeowners and buy a home of their own for their family,” Cruz said.

“It takes a village to raise a child, so I guess you could say it takes a whole community to build a house,” St. Mark’s Director of Community Service Jorge Correa said.

Directors of Community Service from both Hockaday and St. Marks, Laura Day and Correa, agree that the partnership between the two schools is both smooth and equal.

“We do food, snacks and volunteers right down the middle. It is really the best project the Hockaday and St. Mark’s community service boards do together,” Day said.

Junior Fernanda Treviño-Suárez, the Hockaday Habitat Project Coordinator, is in charge of sending out emails that remind students what they should wear, what the weather will be like and to be on time. On the build site, Treviño-Suárez is Day’s right hand woman, insuring that everyone has a job during the build.

“It is just an amazing project and I am really honored to be the coordinator,” Treviño-Suárez said. “My favorite part about Habitat for Humanity is that you don’t have to know what you are doing when you get there. You just show up and have fun and by the final day there is a house built. It is just really cool to see all the progress.”

Day said that the process of constructing a house is not only amazing, but uplifting as well. “I think there is something really empowering about showing up, stepping back, and realizing you put siding on a house and helped build it,” she said.

Whether it is hammering siding on a house, cutting a beam or laying flooring, Day said that these skills are empowering for women to learn because they are oftentimes not expected for women in society to accomplish.

“The collaboration involved in building a house is also rewarding,” Day said. “The students get to learn about a community and a family on a very human level.”

But Correa’s favorite moments at Habitat happen not hammering or sawing, but rather sitting on the curb with a sandwich.

“We share food with people in the neighborhood and it is a real reflection of how human this process is,” Correa said.

And the program has evolved and developed over the years simply because of how serious the students take it. “As people come more and more they develop skills and teach them to their peers,” Correa said. “It is cool to see the impact that individuals can make when they take ownership over the project.”

Habitat for Humanity supports the responses from Day, Correa and Treviño-Suárez. On its website, the organization states that they give volunteers the opportunity to try something new, work with those who are different than you, understand the needs of others, get involved in strengthening your community or neighboring community, learn new skills and gain confidence.

“My dreams of having my own house are coming true and the best part is that I’m building it,” Rivera said. “And I always ask my wife—can you believe it’s true? This is amazing. This is happiness.”

Although the relationship among Hockaday, St. Mark’s and Habitat has remained strong and steadfast over the last 10 years, leadership from Hockaday sees room for the project to improve.

And Treviño-Suárez hopes that a lot of different people come volunteer weekly. Because there are 25 people on the wait list each week, Treviño-Suárez wants to find a way to get as many students involved as possible, so for the second week on the site they have split up the two shifts into a morning and an afternoon shift.

Day said that the relationship between Hockaday and Habitat homeowners extends far beyond the dedication day. “We try to stay around. Sometimes I stop by when I am in West Dallas. We also see them a lot during the build,” Day said.

Because space on the construction site is limited and spots fill up quickly, students eager to make a difference can also volunteer at Habitat ReStore, the nonprofit home improvement store and donation center off Forest Lane and Marsh Lane, which sells home goods to those in need, at any point during the year.

To sign up for a build, Go to X2Vol through the rest of February and into March. You must be at least 16 years old in order to come to a regular Saturday build; however, the last day, the landscaping day, is open to the entire Upper School.

Hopefully in April, once the keys are handed over to the new owners, the nameless, collarless dog from McBroom Street will continue to bring joy to the Cruz-Rivera home, as it does with only the walls up.\