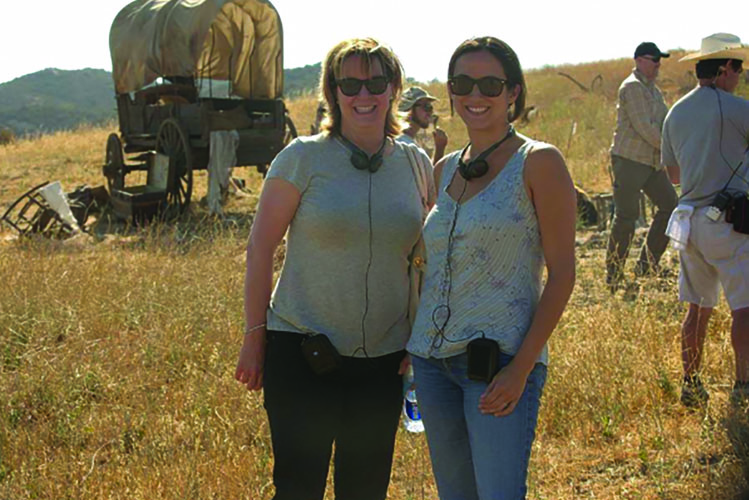 At 8 a.m. on a sunny California morning in December, Athena Wickham ‘98 scribbled onto the pages of her leather-bound notebook, with screenwriter Robert Patino across from her. This wasn’t any ordinary conversation: Wickham carefully observed Patino’s interview performance and listened to his qualifications to decide whether or not to hire him for a new position on the HBO show “Westworld.”

As executive producer of the show, Wickham has the ability to make the final hiring decision for any director, actor or writer. Wickham’s work has recently paid off: the show’s first season ranked as the most-watched first season of an HBO show in history, with 12 million viewers.

But Wickham found her passion for producing later in life, and she was not completely set on pursuing this path while in high school.

“Growing up, I loved TV and movies, but I wasn’t sure of what I wanted to do,” Wickham said.

After graduating from the University of Southern California in 2002, Wickham began her film career by working at William Morris Endeavor, a talent and literary agency based in Beverly Hills.

“I noticed that this was an opportunity and I needed to seize it,” Wickham said. “I worked there for two years to be able to get my foot in the door.”

Wickham then continued her work at Bad Robot Production Company, a film agency in which she met the two eventual writers for “Westworld,” Lisa Joy and Jonathan Nolan. Through her nine years at Bad Robot, Wickham worked as an assistant to J.J. Abrams (known for his work on “Star Wars,” “Star Trek” and “Mission Impossible”) and gained experience in production along the way.

During their time at Bad Robot, Wickham’s colleagues Joy and Nolan decided to start their film company: Kilter Films. Wickham decided to experience something new and moved to Kilter Films to collaborate with them on a new project, “Westworld.”

“Westworld” is an futuristic television show with robot hosts that allow visitors to live out their fantasies. “I liked the point of view that Jonathan and Lisa came from,” Wickham said. “They came from the point of view of the robot and they took it to a different place,” she said.

Another aspect that appealed to her was the show’s originality. “I am always looking for new material in television and this was something that surprised me,” Wickham said. “I love the sci-fi genre and Western movies, and “Westworld” is a complete hybrid of both,” she said.

Now, as the executive producer for “Westworld,” Wickham ensures that production is running smoothly by recruiting talented candidates for positions on the show and overseeing every step of the writing, editing and casting processes.

“I’m making sure that the tone and vision of the writers is being seen through the director, the actors and everything else,” Wickham said.

“Westworld” writer Gina Atwater can attest to Wickham’s passion for her job. “She’s funny, smart and so capable,” Atwater said.

Atwater and Wickham interact frequently, since Wickham oversees the executive decision making on the show, while Atwater is involved with the scriptwriting on the show as a writer. “[The writers] meet in the room everyday and as a room, we think about the overall season and major points you want to hit for all of the characters,” Atwater said.

Atwater regularly reports to Wickham for questions she has about any aspect of her job. “She is the mom of everything and has a hand in everything,” she said.

Executive co-producer Robert Patino shares Atwater’s respect for Wickham. Patino, unlike Wickham, manages a group of writers and oversees the post-production aspect of “Westworld,” including editing and sound mixing.

Patino, who was hired by Wickman, has grown to appreciate her leadership abilities and charismatic personality. “[Athena] is an amazing team player and very grounded,” Patino said. He also believes that Wickham has the ability to accomplish what needs to be done, describing her as “efficient and fearless.”

Wickham credits Hockaday for developing within her the passion and work ethic necessary to thrive in the film industry. “I attribute a lot to Hockaday when it comes to learning how to be independent and not feel overwhelmed when you have a lot on your plate,” Wickham said.

In particular, Wickham is grateful for formative Hockaday classes such as Ed Long’s History of Art and Music and Steve Kramer’s AP United States History, which challenged her and taught her to think critically and creatively.

“Nothing developed me more than Hockaday’s classes, even more than college,” Wickham said.

To those interested in exploring a career in film, Wickham advises fully taking advantage of every great opportunity. “Luck is realizing when an opportunity is in front of you,” Wickham said. “And once it is there, do the best you can to get a leg up and keep moving forward.”