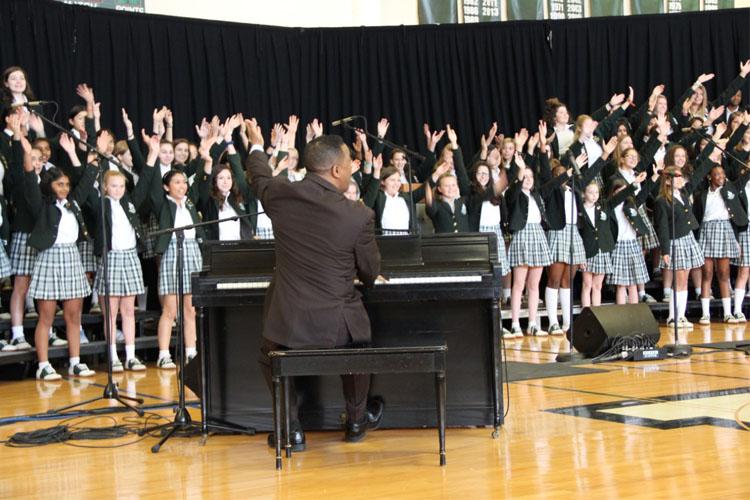 On Jan. 13, the entire Hockaday community gathered in Penson Gym for the Martin Luther King Jr. assembly where the life and legacy of the activist was honored through presentations, music and poetry. The audience gave standing ovations after their peers’ performances and clapped and sang along with the choir, all while absorbing the celebration.

Director of Inclusion and Community Tresa Wilson, who organized the event, hopes to keep the momentum of that One Hockaday experience going.

“That was probably the first time in my 11 years here I saw us as one whole community, and that we were really committed and we were together—together in celebration and together in spirit,” Wilson said.

Now, where do we go from the gym? And as guest speaker Pastor Dr. Frederick Douglass Haynes would ask, how do we turn the “-isms”  of racism, sexism and classism, for example, into “-wasms”?

Forty-eight years ago, during a time of civil unrest, students at Kent State University took their emotions and channelled it into a cause. They brought awareness to the issues and they rallied, ultimately expanding Black History Week to Black History month in 1970. The nationally recognized and celebrated holiday has been celebrated annually ever since. However, Hockaday’s President of the Black Student Union senior Alex Shaw said that it attracts controversy for its focus on African-American history. Shaw believes the role of Black History Month is an essential one.

“The history of black people is less discussed in history courses and history in general,” Shaw said. “It’s an important part for people to recognize how much African Americans in the U.S. contribute to our country, and because we don’t have that representation, there’s a necessity for Black History Month.”

One organization that “serve[s] to assist all people to understand the African-American Experience” is the African American Museum of Dallas, which provides quintessential information about black history.

The current exhibits of the AAM include “Facing the Rising Sun,” which contains photographs and objects from Freedman’s Town, now known as North Dallas, and “The Souls of Black Folk,” a folk art collection with more than 500 pieces of African American Art.

But the AAM isn’t alone. Other museums in Dallas, such as the Dallas Holocaust Museum and the Crow Collection of Asian Art, are also involved in promoting racial unity. Through their exhibits, viewers are able to gain multidimensional viewpoints of different cultures.

Sophomore and vice-president of the Young Republicans Charlsie Doan believes that exposure to different perspectives are a key part of combating hatred and bigotry.

“If we really want to make a difference, and make things better for Americans, [all parties] have to talk and work together,” Doan said.

And interaction between races is crucial as well. Senior Jenny Zhu, president of Young Democrats, believes that conversation is important because it takes the first steps towards accepting, and even celebrating racial diversity.

“When you’re not communicating with other people, you’re living in your own echochamber. It’s always good to keep an open mind to try and put yourself in other people’s shoes and feel empathy,” Zhu said. “That is impossible if you can’t even talk to someone who disagrees with you.”

Hockaday’s Student Diversity Board, Black Student Union and political clubs—such as the Young Democrats, Young Independents and Young Republicans—provide safe spaces for students to converse amongst their fellow peers. Outside of school, the Dallas Area Diversity Youth Organization, a coalition of schools across North Texas, get together approximately once a month to discuss topics that range from international current events to personal diversity identifiers.

As DADYO’s upcoming forum demonstrates, discussions don’t have to be a formal debate. According to Wilson, unity may be achieved in ways we least expect it. It could certainly, but may not, occur in a conversation about civil rights or in a forum about diversity—unity can be touched anywhere, whether it be on the soccer field or in the hallways. However, it begins with every individual student: students must be comfortable and confident with themselves first.

“Bringing your authentic self is important, and that’s what we must start doing,” Wilson said. “I see an underlying current sometimes with students that they feel like they have to assimilate, lose part of themselves and their culture to fit in, but I don’t want you to fit in. I want you to feel like this is where you belong.”

Hockaday is hosting DADYO’s next forum and invites all participating schools to attend. It will be in Clements on Feb. 15, 6-7 p.m., and its theme for February is how to have difficult conversations over social media.