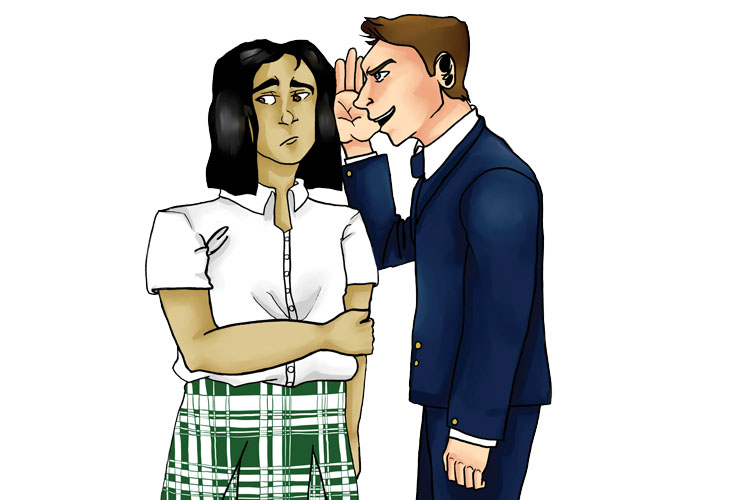 These are only a few of the many insulting terms, some too graphic to mention, that are used to define us young women by many of our male counterparts.

While these words may be considered playful banter among friends, they each have impact: the potential to destroy someone’s self-confidence.

If we don’t agree with something they say, we are bitches. If we don’t reciprocate their feelings, we are sluts. And worst of all, if we call them out on this kind of language, we are “overreacting.”

At Hockaday, we are empowered as young women to see ourselves as future leaders and to never let anyone tell us otherwise; however, we are not taught how to respond when the adversary is our own friend.

Most likely, if we were outside of the comfort of Hockaday’s bubble, we all would have no problem speaking out mind and telling off a stranger who was making lewd comments about us. But when faced with the issue of potentially ruining a friendship, the stakes seem a lot higher.

The majority of us have learned how to ignore these comments and just accept that “that’s just how they [guys] are.” But there lies an inherent problem.

That’s not just “how they are.” Not all guys fall into this category. For the ones who do, they weren’t simply born making sexist or demeaning comments–society taught them to be that way.

There seems to be this fatal pattern that we Hockaday girls often fall into, a toxic verbal culture with some of our male confidantes.

Perhaps it’s because we go to an all-girls institution. Many of us put up with what other girls may not because we are worried of severing our ties with our brother schools. After being a part of this community for a while, we don’t know anything different from what we are exposed to, forgetting that there is another culture beyond the gates of 11600 Welch Road.

And as a result, we inadvertently have started to ignore this kind of degradation, even to the point that we are gone numb to it.

It’s time to realize that while we may advocate women’s rights to equal pay, equal rights and equal education, these efforts to support feminist movements mean nothing if we continue to stay silent when we are faced with the issue of equal treatment, simply because the opposing side is someone close to us.

By allowing our friends to degrade, insult and devalue us without even a slap on the wrist, we are actually perpetuating the problem.

It all goes back to the double standard that exists among our age group’s culture. When a guy has many girls fawning over him, he is considered “the man,” someone to look up to and aspire to be. But when a girl has the attention of multiple guys, she is called a slut and a whore.

And so, it is time that we as young women stop saying, “It’s okay, I’m used to it,” and start saying “No.” No to the insults, no to the objectification and the put-downs, no to the verbal abuse.

We need to stop living in fear of losing a friend or damaging our reputation. Because the truth is, if the person is really our friend, they will stop abiding to this deplorable societal norm that requires them to objectify women. But if not, maybe we should be questioning if they are the kind of person we want in our lives.

If we want to change the norm and put an end to this notorious characteristic of our generation, we need to be more persistent and less accepting. If we want respect, we must demand it.