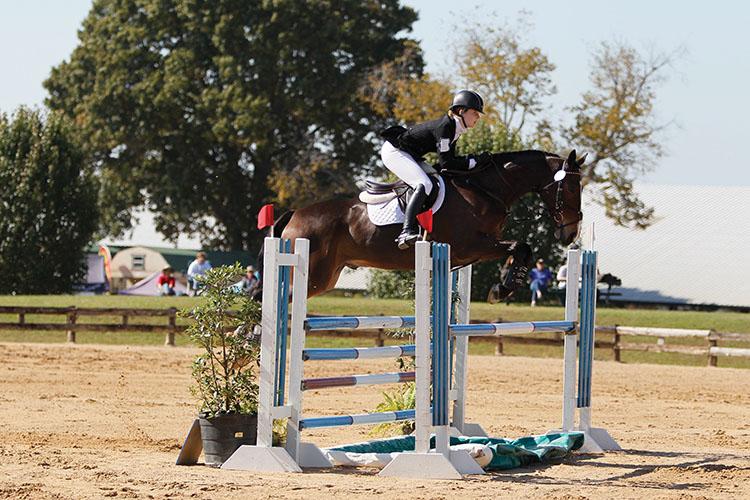 Junior Jane Cook had just finished her ride on Dec. 21 at Buckbranch Farm when she got the email. She ran straight into the arena to find her trainer.

“It” meant one of 17 spots in the United States Equestrian Federation’s Eventing 18 program, part of the larger Emerging Athletes program that the USEF runs. Eventing is essentially an equestrian triathlon. Riders and their horses compete across three different disciplines: dressage, cross-country and show jumping. In dressage, riders display their horse’s training with predetermined movements. Cross-country is an endurance test of sorts, in which riders perform a series of outdoor jumps on natural terrain; courses are typically three to four miles long. Similarly, show jumping is like an obstacle course, but is usually held in an arena and can require different techniques.

As an eventer under the Eventing 18 program, Cook is one of the young riders, 18-years-old or younger, described by the USEF as having “the potential to evolve into future team candidates.” In other words, the USEF thinks that Cook might someday represent the United States at an international level. That includes sporting events like the Olympic Games and the Pan American Games.

“[It’s] basically just trying to develop the next generation of top riders in the sport,” Cook said.

Eventing 18 makes up one half of the Emerging Athletes program; the other half is known as Eventing 25 and consists of riders under the age of 25. The selected participants had the opportunity to attend a training session in either Ocala, Florida or Temecula, California.

Cook chose to attend the Florida session, where the young riders were given lectures, rode in pairs and watched their peers’ sessions to learn as much as possible each day. British eventer and Olympic gold medalist Leslie Law served as their coach.

The Eventing 18 training, while intensive, is not a far stretch from the strictness of Cook’s regular schedule. Cook rides a minimum of five days a week and rides in competitions approximately twice a month in the spring and the fall. On top of practice and shows, Cook must also balance schoolwork and her social life.

With her rigorous training regimen, Cook names her parents as her greatest support system. Cook’s mother Sherri Cook, a self-described “show mom,” notes the positive effect horseback riding has had on her daughter’s life.

“I love it so much for her. It’s an outlet. She takes this on very much herself,” Mrs. Cook said. “I try to be that positive support in the background.”

Mrs. Cook and her husband Tom Cook accompanied their daughter to the Eventing 18 training session, which took place from January 16-20. The USEF is currently planning additional training sessions for later in the year. Though the initial training session was only five days, Cook believes the experience will last a lifetime.

“You make so many connections with other top riders your age and these top trainers that can last you for the rest of your eventing career. I got to meet girls whose names I’d been reading since I was 13,” Cook said. “To be able to not only meet them but ride with them and hang out with them was amazing.”

Cook’s trainer Rebecca Brown, who first introduced the program to Cook, has seen a significant improvement in her student’s riding since the Florida session. Brown cites Cook’s hard work and natural skill as her greatest strengths.

“Jane is a really good student. She’s very smart, and she has a good feel for things,” Brown said. “She’s really able to interpret sort of the subtle things you can tell her horse is trying to communicate to her.”

That communication is extremely important in eventing, where horse and rider must work together to achieve the best results. Cook and her horse Monatrea Xavier – Xavier for short – share an especially close bond.

“Everyone says that in your life, you’ll have that one horse that’s the perfect match, that’s the horse of a lifetime that’ll take you above and beyond where you ever thought you could go,” Cook said. “He’s really that horse for me.”

Cook trained with Xavier in Florida. Since then, Brown has also noticed an improvement in Xavier’s skill.

“He and Jane are just a great partnership,” Brown said. “And just the opportunity to go and have a really intense boot camp where you can really spend time with your horse and watch the other really great riders of the century and have Leslie sort of give you a lot of information all day, you just can’t not improve.”

For a young eventer like Cook, acceptance to the prestigious Emerging Athletes program opens many new doors. Though Cook doesn’t know as of yet if she wants to pursue eventing professionally, her next big goal is to compete in the North American Junior Young Rider Championships, also known as the Junior Olympics. Just as with Emerging Athletes, riders must be selected to compete. With her track record, Cook is already qualified for the championships.

“She doesn’t have to chase qualifications,” Brown said. “She just has to show the selectors that she’s really solid at the level and continuing to be consistent.”

Cook hopes to be chosen as one of the six riders who will represent her region at the Junior Olympics in late July of this year. Her participation in the Eventing 18 program will play an important role as the selectors make their decision, which will announced in June. The championships are set to take place in Montana.

Brown believes the Emerging Athletes program has been a priceless experience for her student of five years.

“Jane’s confidence has blossomed so much,” Brown said. “She’s really taken her riding to the next level.”