Not a PITiful Idea 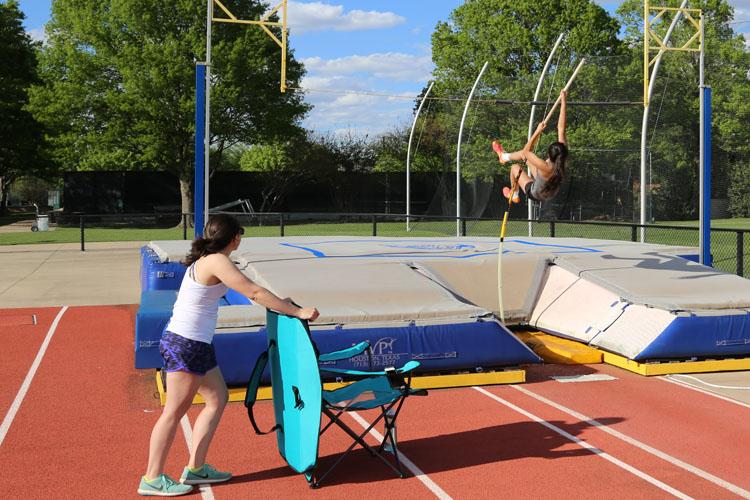 Every Tuesday, Thursday and Friday, junior Rory Finn takes her track spikes out of her bag and straps them to her feet in preparation for her sprint workout on the Hockaday track. And every Monday and Wednesday, she takes those same spikes out of her bag again, but this time at St. Mark’s to prepare for her pole vault workout.

Finn began pole vaulting this season under the guidance of Upper School chemistry teacher and pole vault coach Jen Fore, who has advocated for a pole vault pit since she joined the Hockaday faculty in 2015. But the process officially started in November of 2016.

“Having a facility here is most ideal so we can eventually be competitive,” Fore said.

Finn currently has a workout that causes her to compromise between her specialties. For many athletes like Finn, to have a pole vault pit at Hockaday would allow them more time to practice.

“A lot of times, when I go to pole vault, I’m missing a sprinting workout,” Finn said. “The convenience of a pole vault pit and track in the same location would really enhance my ability to do both.”

“It’s pretty hard to monitor the kids doing pole vaulting at one location and holding them accountable to do their workout at that same location,” Bean said.

“Obviously, there is a need for a pole vault facility because the girls are being shuttled back and forth, and it’s not very efficient,” Coats said.

Bean and Fore brought the proposal to Coats at the end of January. The financial office and the coaches are working together with administration and maintenance to ensure that everything goes smoothly.

“It’s something that is on the radar and that we’re moving forward to make sure we have all the logistics in place to get that done,” Coats said.

According to Bean, one of the obstacles the team ran into at first was finding a location for the pit. However, now they have decided to place it between the track and the lower school playground, where the climbing fence currently resides.

“The next step is the biggest step.” Bean said. “[We’re] trying to get everything approved, so we can start the work… and decide on where we would get the pit from.”

Another necessary step is choosing a suitable pit. Turek, who has experience building pits, is helping Hockaday in this process. For Turek, it’s important to find a pit that fits the abilities of athletes.

“We don’t need overkill,” Turek said. “It shows commitment on the part of the school to support the athletes and you need that always.”

“I hope that we would be able to build the program, so we can start kids young,” Fore said.

“Having a pole vault pit here at Hockaday would definitely make the team feel more united,” Finn said. “If the whole team is working toward the same goal at the same place, we’ll be inspired by each other to keep pushing hard.”