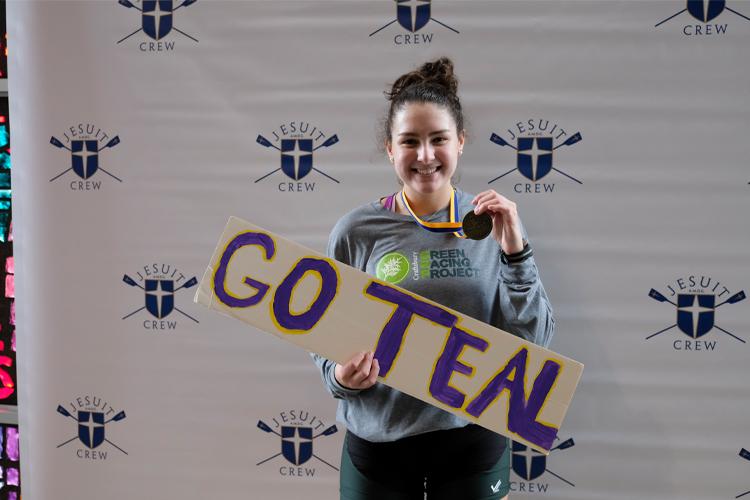 A stark contrast from her usual Saturday morning spent practicing on the lake, senior rower Teal Cohen spent her Saturday on Feb. 4 at Jesuit Preparatory School, and instead of her boat, Cohen mounted an erg and started to compete.

This competition, which takes place every year in early February, attracts rowers of all ages.

“It is a regional thing, so people come from all over the south kind, but mainly from Texas and Oklahoma,” Cohen said. “It is every year. Jesuit hosts it and it is just on a Saturday and they have races for everyone from high school to masters.”

According to SWEAT coordinator and Jesuit Preparatory School head crew coach John Fife, the competition has been at Jesuit since his time there.

“Ever since I have been at Jesuit, we have hosted SWEAT. Jesuit has been the host of SWEAT since 2007,” Fife said, who has been coaching at Jesuit since 2011.

SWEAT offers a race for everyone who rows; men and women, lightweight rowers and open divisions, southwestern high school students, as a well as area college students and Masters adults.

While all of their races garner nationwide athletes, Fife said that some are more popular than others. “We had exactly 500 competitors this year. It varies from event to event. The largest events are the Men’s Junior 1x, Men’s Junior Lightweight 1x, and the Women’s Junior 1x in that order,” he said.

“All of the erg monitors are attached to a leaderboard. I was not looking up there but on the bottom it shows who is in first and then the two people around you. I knew where I was compared to everyone else,” Cohen said.

Going into the race, Cohen was expecting a normal outcome, just looking for her best work.

“My personal record going into the race was a 7:16 and I had been injured. I had taken almost a month off but I just kept up my cardio and done a lot of stuff,” Cohen said. “I trained a lot the  rst part of the winter and so I went into it not really knowing how I would finish. I was seeded third and I just wanted to have my best race.”

Tim McAllister, the head crew coach at Hockaday for the last five years and Cohen’s coach, was present to coach her during her 2k race at SWEAT.

“You are there to basically help the oarsman stay on their plan. If you see an oarsman change or start to miss their goals, then you say something. You guide them onto the right path,” McAllister said.

Along with McAllister, fans were able to watch and cheer on competitors.

According to Fife, Cohen’s personal record time is impressive.

“It takes a lot of hard work and time to get your score down. The 2000 meter race is very challenging because it puts your whole body in a lot of pain. You must have both physical and mental toughness to succeed,” Fife said.

Winners, like Cohen, receive a gold medal. And according to Fife, some even qualify for another ergometer competition, called CRASH-B, in Boston.

With regattas peaking in the fall and spring, Cohen had gone a while without practicing on the water. But according to Cohen, the two are very different. By keeping up her cardio, Cohen was able to stay in shape.

As for the spring season, Cohen is hopeful.

“Rowing and erging are very different. I do feel like I am in better shape than I thought I was,” Cohen said. “I am coming off of an injury now.”

“Hopefully a bunch of medals,” McAllister noted, with a laugh, when asked about Teal’s spring season.