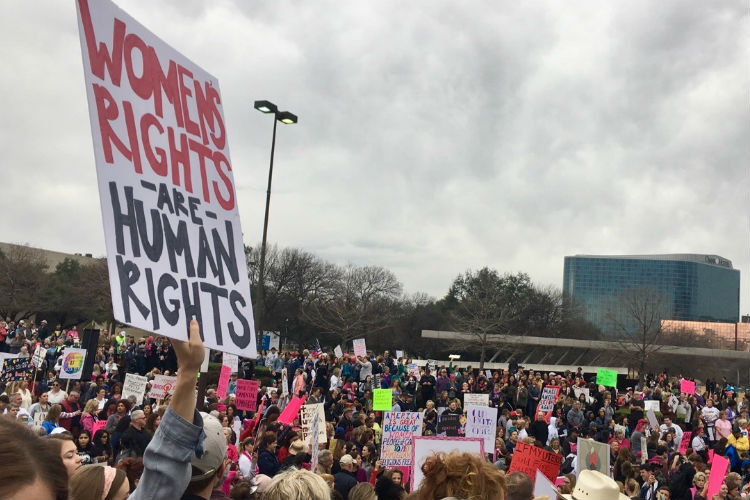 PICTURED ABOVE: Senior Anden Suarez marched in the Women’s Rights Rally in Dallas on Jan. 21.

Since the 2016 election, President Trump signed legislation which aimed to cut off federal funding to Planned Parenthood and other abortion clinics. Especially in Texas, which outlawed Planned Parenthood from the Women’s Health Program in 2011 and created the Healthy Texas Women Program, which specifically was created to block access to Planned Parenthood, the reproductive health clinic needs more funds to stay afloat.

According to Planned Parenthood of Greater Texas, there was a 41 percent decrease in women receiving abortions since they were excluded from the Women’s Health Program.

Mary McDermott Cook, in a Dallas Morning News Article, said that knowing that people need access to healthcare and information, the Eugene McDermott Foundation donated $1 million because they support the work Planned Parenthood does for women’s health, regardless of a person’s economic status.

Along with their philanthropic work with PPGT, the foundation generously endows many institutions. “[They] provide philanthropic leadership not only to Hockaday, but to many of the fine institutions of Dallas including but not limited to St. Mark’s School of Texas, The University of Texas at Dallas and the Dallas Museum of Art where they have also endowed leadership positions,” Debby Spradley, Director of Development and External Affairs, said.

“The McDermott Foundation, led by its president Mary McDermott Cook ’71 and Life Trustee Margaret McDermott, believes strongly in the power of effective leadership. They endowed the Eugene McDermott Head of School Chair at Hockaday in 1998 to support the Head of School to underscore the importance of this position.” Spradley continued.

The Hockaday school, given by its motto, Virtus Scientia—virtue through knowledge,—believes that education is the way to combat ignorance. Sharing this belief, Planned Parenthood provides health education in order for women to make informed decisions.

“It makes me feel like Hockaday is moving in the right direction because the people who are behind us and involved with our endowment believe in the right for women to have equal access to healthcare and make informed decisions.” Anden Suarez, President of the Student Diversity board said.