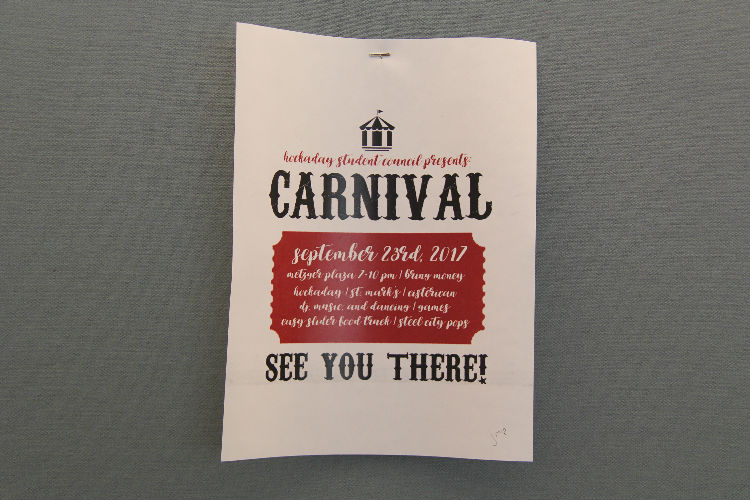 Have you seen these posters (pictured above) hanging around school for the mixer on Saturday night? Or rather, non-mixer?

The only difference between the “non-mixer” and the usual “mixer” is the name. All the schools except Jesuit will be invited.

According to Watson, this year Student Council (StuCo) is trying to cater to a wide variety of interests. The “non-mixer” will have food trucks and offer Steel City Pops. The event will also have carnival-themed games, including make-your-own cotton candy and a giant Jenga board.

Student Council Treasurer Michelle Chen has been working diligently on the decorations recently.

“In the past, it’s weird how the budgets lay out” Watson explained, “and the Treasurer doesn’t have as much control as they should, so we decided to leave Michelle in charge of the decorations.”

“Because the “non-mixer” is in Metzger instead of the past years when it was in Penson, the Student Council thought it would be harder to put decorations on the trees, so we decided to order lots of balloons and make cardboard cutouts.” Chen explained.

StuCo wants to mimic the stereotypical idea of a carnival as best as they can. Along with the games and food, the decorations, which include a direction sign pointing to every activity, will fit the carnival-theme as well.

This week, make sure to stop by the bookstore for a Stucco “non-mixer” t-shirt. Hockaday senior Zasca Ristianto, owner of the typography Instagram account @lilaclotustypography, designed the shirts. Also, make sure to keep an eye out for students with clown noses on their noses on Thursday and Friday. Student council is using this as another way to promote the “non-mixer.”

Photo and story by Ashlye Dullye