The Revelation Behind Recycling 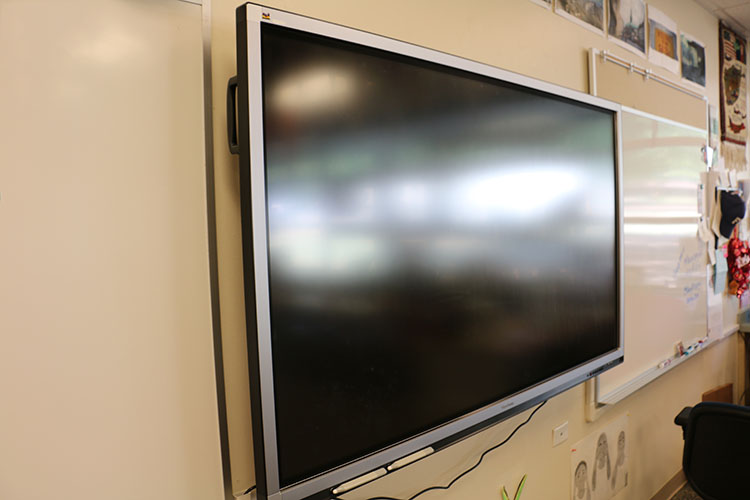 If you were to walk into Upper School history teacher Tracy Walder’s room, you may notice a vibrant variety of college pennants hanging from her ceiling, commemorations of the achievements of past advisees. Or perhaps the cardboard cutouts of former President Ronald Reagan, President Donald Trump and Hillary Clinton would stand out to you as well. However, any Hockaday student would notice one specific detail right away: Walder’s new SMART Board.

Technically, this board is not actually a SMART Board, but is instead considered a “panel” because it does not have a projector. Walder was one of few teachers who received a new panel in replacement of her old, malfunctioning SMART Board.

“[My old SMART Board] basically was not functional as a SMART Board anymore,” Walder said. “Mr. Hill, who works with audio and visuals, was in my room at least once or twice a week trying to fix it.”

SMART Boards are not the only items that get updated around campus, however. Although we may not always notice it, outdated items are constantly being replaced with newer, more efficient ones. In the past five years, Hockaday had two entirely new buildings constructed from scratch, along with numerous furnishing and technological renovations.

With all of these new items constantly being circulated through the school, one sole question arises: to where do the old items that are being replaced mysteriously vanish off?

I decided to do a little digging into this matter myself, and I was able to come across some evidence that pointed to where the unwanted products were held:

For this first case of disappearance, I talked to George Hanlon, Assistant Director of Technology, who I thought would have some helpful insight. Hanlon told me that when the smart boards failed, they were collected by an electronic recycler during the summer.

“Essentially, the recycler comes and they deal with recycling that type of thing,” Hanlon said.

After they were taken to be recycled, the SMART Boards were replaced with newer, more efficient ones.

It turns out that SMART Boards aren’t the only items in need of updating around Hockaday—pianos also fall into this category. When I chatted with Carolyn Hoke, director of housekeeping, she revealed where one certain piano went when Hockaday no longer used it.

“We did some asking around through Mrs. Day and eventually donated it to ED Walker Middle School,” Hoke said.

Now, a piano that we no longer use sits in the auditorium of a different school, where it is still appreciated by children.

Then, if the laptop still functions, it will be repurposed and sent straight back to the third floor of the Liza Lee Academic Research Center, better known as “Tech” to students. Here, the laptop will serve as a loaner computer for one year.

If it isn’t dead by the end of year five, the laptop is donated to a cause that would benefit from its use.

To conclude this process, I talked to Hoke about where old furniture is sent once it has been replaced.

I learned that when a piece of furniture is no longer needed, it is first offered up to members of the Hockaday community. If no one claims the chair, desk, or whatever it may be, Director of Community Service Laura Day contacts local DISD schools who may have a better use for it, and often times, it will be claimed by a school.

After sleuthing my way around campus, I was able to piece together the mystery of where these objects kept disappearing to. Now we can appreciate as a community that although these objects are no longer held to the proper Hockaday caliber, they can be passed on to places which provide other uses for them.