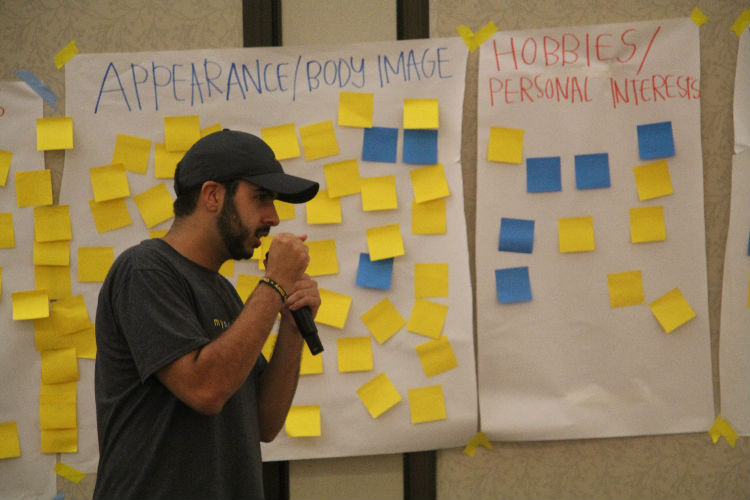 PICTURED ABOVE: Founder of My Name My Story Amit Dodani leads a discussion on diversity at the sophomore retreat on Aug. 24

From growing up with a speech impediment to joining his school’s mock debate team, founder of My Name My Story Amit Dodani wanted to share his story and create a platform for other stories to be heard. He put this idea to action and created My Name My Story, an organization that now travels to schools across the nation to spread his mission.

Dodani felt the pressures of navigating childhood and adolescence with a speech impediment and decided to go to a speech therapist. Eventually his parents encouraged him to try out for the mock debate team, pushing him and inspiring him in a way that changed his life.

“I went from being a kid who was super afraid of public speaking to that field of storytelling becoming my greatest passion and love,” Dodani.

Channeling his passion, Dodani decided to start an organization known as My Name My Story as a freshman in high school. By sharing his own story first, Dodani hopes to teach students to build empathy for others and become inspired to act out against the injustices in the world around them.

“We believe that the lack of empathy is one of the biggest problem in our society right now and we believe that empathy can be taught through storytelling,” Dodani said. “Our mission is to leverage the power of storytelling to teach young people to take agency over their own lives, their community, and school right now.”

Now, Dodani has decided to take a year off school to fulfill his role as formal CEO of My Name My Story. As a speaker, facilitator and business man, Dodani takes on many roles to ensure the success and growth of the organization. With a large team working by his side, Dodani hopes for each member of his organization to stick by the organization’s mission.

“My primary role is figuring out how we can expand and innovate and making sure that as we grow that we are completely set up to grow,” Dodani said.

Alumna and student at the University of North Carolina at Chapel Hill Berkley Wood ‘16 learned about My Name My Story during her environmental science class and immediately reached out to get involved. After having breakfast with one of her peers and Dodani, Wood decided to join the team.

“When you get to college you want to find your niche,” Wood said. “So [My Name My Story] kind of aligned with what I want to do and it’s socially impactful and interesting, and I believe in the message so I decided it would be a good use of time.”

Wood has contributed to the organization by networking with schools mainly in Texas and creating a market profile for private high schools in the Dallas area and how they coincide with the political education in Dallas. She also helped organize and plan several events, including a donor’s dinner in Atlanta.

With the help from Director of Service Learning Laura Day, Wood worked to bring My Name My story to Hockaday. This past August, Wood along with Dodani traveled to the school to work with the sophomore class during what the organization calls “Changemaker day.”

When Dodani created the idea of Changemaker day he split the day into two parts. The first part focuses on his belief that stories inspire empathy and he challenges students to answer the questions of “who am I,” “who are you” and “who are we?” Then he directs the second part of the day to discuss how we use this empathy to drive change.

“The day is meant to be a sort of emotional rollercoaster and end with a call of action for young people in whatever capacity that they want to be changemakers and change agents right now,” Dodani said.

However, instead of just coming in and lecturing, Dodani and Wood stressed that importance of the day being led by students. One of the student leaders, sophomore Madeline Petrikas acted as a facilitator during this day.

“The training taught us how to convey empathy to our classmates, and we did many of the activities that they would do in our training,” Petrikas said. “We acted as facilitators, pushing our classmates to be openminded and vulnerable.”

After the conclusion of the day, Petrikas watched her classmates create bonds they had never been able to create before and saw her community as a whole grow closer.

“I think our grade really came together and bonded; a  lot of new friendships were made that day,” Petrikas said.

To continue this positive momentum, Dodani hopes that in the next few years that My Name My Story will be working in 250 schools per year.

“I hope more people start believing in this non traditional way of empowering young people, through creativity and storytelling, and bring these ideas to the forefront of the education system and make them mainstream,” Dodani said.

Visit My Name My Story’s website for more information.