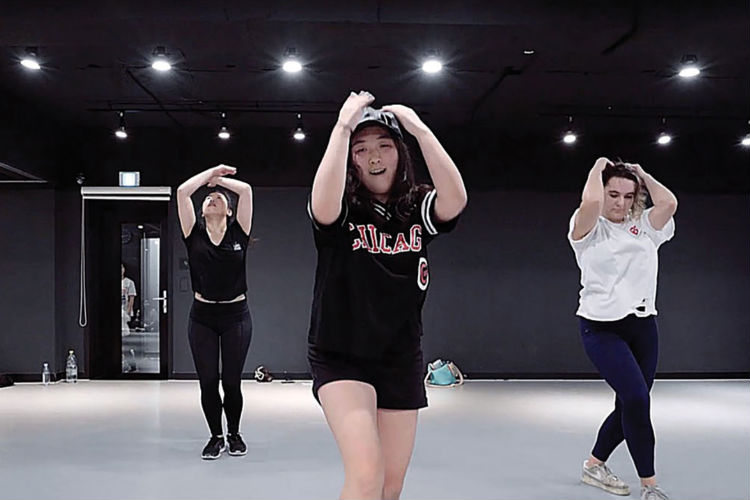 PICTURED ABOVE: Senior Dana Choi dances at 1MILLION Dance Studio, in Seoul, South Korea, to the hit song, “Nights With You” by MØ. // Courtesy of 1Million Dance Studio

With a synchronized rhythm and filled with zealous passion, senior boarder Dana Choi moves her hands as the tips of her fingers glide and flow through the air, effortlessly. Her quick feet stomp along with the beat, her body pops and locks in harmony and her head twists and turns simultaneously. And people are watching.

1MILLION Dance studio in Seoul, South Korea is a staple in the dancing world and a mega hit on YouTube. Choi was lucky enough to be chosen to dance in two of their famous dance videos.

After attending classes at 1MILLION for the past three years, Choi was featured in two videos this summer. Besides the “Nights With You” video, she has also been featured in “Gold,” which was choreographed by Ara Choi, Dana’s former dance instructor at 1MILLION.

“Anyone can join since they offer beginner classes, but people come around the world to just be a part of the studio since it is so famous,” Choi said.

Aspiring dancers and non-dancers alike flock to 1MILLION Dance Studio’s popular YouTube channel to study the choreography, spot their favorite instructors or just gawk at the flawless skill set of the dancers.

With its six million and counting subscribers on YouTube, the studio has an international following. Many members of the Hockaday community have been introduced to 1MILLION work through Choi’s videos.

Junior Cindy Lu, a 1MILLION YouTube subscriber and a fan of Choi’s, appreciates the group’s creative and varying posts as they show all different types of skill levels in their video tutorials.

“I love watching their videos and see- ing how much work they put into making their passion a reality,” Lu said. “I know Dana danced there this summer from her Instagram posts, and I was immediately surprised that I knew someone who would be on a well known YouTube channel.”

To be chosen for a video appearance the dancer must have, and the dancer gains more popularity in the dancing world.

“In fact, in some very rare cases, these dancers end up becoming choreographers at 1MILLION,” Choi said.

But despite her hip-hop moves, Choi was trained as a classical dancer since the age of 4. Her interest switched from ballet to hip hop around the end of her freshman year.

“At some point in my childhood, I started to watch these hip hop dancers on TV, and that’s when I started to be interested,” Choi said.

Although Choi admits she is a shy person, the stage gives her the confidence to perform. And she brought this confidence to the Hockaday dance floor since her freshman year.

“Freshman year, she did a duet that was totally different and creative, with her movement and choreography choices. It was a modern jazz style, that I had never seen from her before,” Sullivan said. “She truly blossomed and her ideas and views about music and choreography, changed too.”

However, Choi is not the only Hocka- daisy that has graced 1MILLION hallowed floors. Her roommate Heidi Kim ‘17 joined her after Choi convinced Kim to take some lessons at 1MILLION while they were home in Korea last summer.

Kim already was well-acquainted with 1MILLION through its YouTube channel and wanted to expand her novice skills.

“I danced for Hockadance during my junior year of high school and a little when I was younger, but not competitively. I performed at Coffeehouses, but it was really just for fun,” Kim said.

After she took classes casually for a few weeks, Kim picked up the pace and went from two to five classes a week.

Choi and Kim frequented the studio together and bonded with other dancers and YouTuber’s who all shared the same passion for dance.

“1MILLION is like its own little multi- cultural world inside Korea,” Kim said. “Even though some instructors can speak English fluently, and others can just say ‘one, two, three,’everyone can understand and dance together perfectly.”

One of their favorite memories was when they both danced together to the pop hit “Swish Swish” by Katy Perry and were chosen to dance with the instructor instead of the crowd.

“It was both our first times being called to dance with the instructor, since she analyzes everyone and picks the ones who stand out, so it was a great experience to share with Dana,” Kim said.

After a summer of dance at 1MILLION, both girls headed back to America in August.

“It’ll be hard going back to my daily routine and not getting ready for dance class at six in the morning,” Kim, who is now attending New York University, said.

After the program, Choi headed back to the Hockaday campus, while Kim settled in another dorm room in the Big Apple.

To her surprise, Choi’s personal and social life due to dance has boosted her confidence.

“I can’t even describe how much I love performing choreography in front of an audience or in front of the camera,” Choi said. “Especially when I choreograph hip hop for Hockadance’s spring concert, I get so excited when people acknowledge and compliment on my hard work. It makes me want to bring something different and creative every year.”