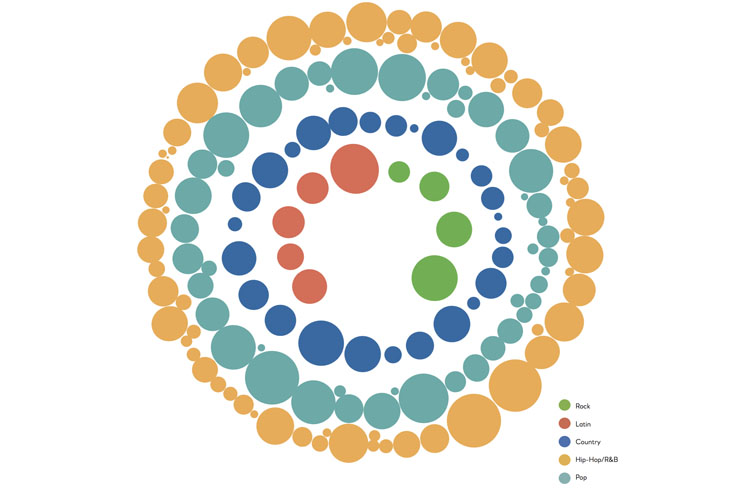 PICTURED ABOVE: Each circle represents a song that made the Billboard Top 100 list. The size of the circle is proportional to the number of weeks a song was on the Billboard Top 100, with the largest circle portraying 47 weeks (James Arthur’s “Say You Won’t Let Go”) and the smallest circle depicting 1 week. // Graphic by Shreya Gunukula, Sources: Billboard Music and Tableau

If you take even a cursory glance at the Billboard Hot 100 Chart, it becomes obvious that the Hip Hop and Rhythm and Blues genres dominate today’s music industry. No longer do Rock&Roll bands such as ACDC, the Eagles and Journey make chart-topping songs. For the first time in history, the total music sales of Hip- Hop/R&B has exceeded that of Rock. (Note: some songs included in the chart under Rock are also categorized under Pop and Alternative.)

In honor of this milestone, we analyzed every song on the Billboard Hot 100 Chart for the last two months to show just how popular Hip- Hop has become.

Rap music entered the mainstream with artists like Tupac and Biggie in the 1990s and has become the predominant genre for millennials. Today, musicians like DJ Khaled, Lil Uzi Vert and Migos are household names.