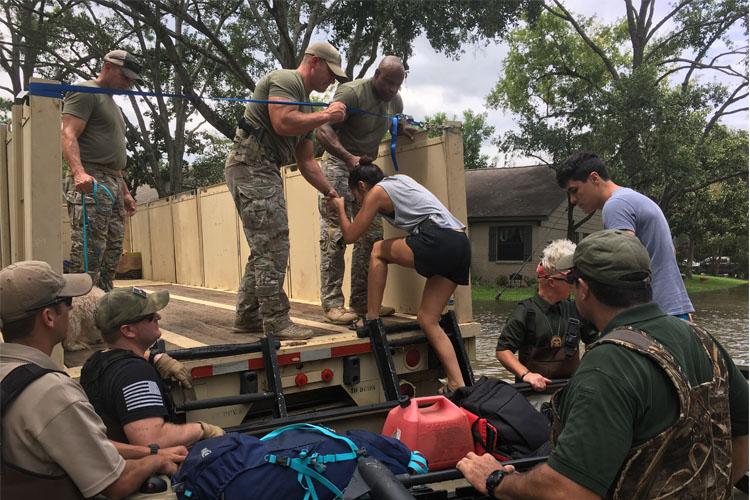 PICTURED ABOVE: Two members of the National Guard conduct a rescue mission as Yearbook Consultant Mickey Mehrens snaps a picture of the scene. Photo provided by Mickey Muhrens.

As a Category 4, Hurricane Harvey made landfall on Aug. 26, tore through Houston and its surrounding areas, lingering for over 96 hours. This storm dropped 9 trillion gallons of water across the Southeastern United States and caused $180 billion in damage. Harvey, the record breaking and devastating “once in a thousand year storm,” destroyed 12,700 homes and caused 507,000 to register for Federal Emergency Management Agency monetary assistance.

In response to the hurricane, members of the Hockaday community traveled to the Houston area to aid in storm relief efforts. Among them, Self Defense Teacher Meg Hinkley, along with Emergency Medical Technicians, firemen and law enforcement officers, took a seven-day trip to Houston to assist the Texas Search and Rescue, a branch of FEMA. Hockaday’s Balfour Yearbook Consultant Mickey Mehrens took a similar trip with his friends to extricate those trapped in their homes.

“No one knew what to do. There was wa- ter coming up so fast to places it had never been, so everybody was taken by surprise. That was one of the reasons it was as catastrophic as it was,” Mehrens said. “There was literally not enough time in the day to help the numbers of people that needed to be helped.”

As they rescued people for typically 20 hours a day, the two took in the severity of the trauma Harvey caused.

Of the spectrum of emotions Hinkley saw in the people she rescued, she said that the most predominant one was numbness. She recalled one woman who told the first responders how she did not think this was the way she was going to say goodbye to her home. All her pictures and memories were in the house; she thought she would be there forever.

Although sad, most people were grateful. Mehrens shared memories of a lady, who re- cently moved from New York City, and found new respect for people from Texas, especially with the way that the community helped each other in a time of need.

In a breakfast discussion to Upper School students and faculty on Aug. 30, Service Learning Director Laura Day encouraged members to truly think about how they would react in this situation.

“There are no boundaries to how people would try and help, and she was very moved by that and extremely thankful,” Mehrens said.

A large issue with the hurricane, however, was that many individuals didn’t leave until their homes were severely endangered. People like Hinkley and Mehrens tried to help these people evacuate their homes.

Mehrens, equipped with his 24-foot Boatright aluminum boat; 200 gallons of fuel; many life jackets; water bottles; diapers and clothing and food donations, navigated through Houston’s flooded streets. He visited a woman’s house on Aug. 28 and 29 and tried to get her out because water was quickly rising in her area. In the end, the woman did not leave until they cut her out of her attic at 2 a.m. on Aug. 31.

Adding to the emotional trauma of the flood, Hinkley also noticed the demographics of people who were most affected.

“I didn’t before realize the close tie of elevation level was to poverty level,” Hinkley said. “It is the people that cannot afford to lose everything that are the ones that do.”

The greatest financial devastation in times like this is for families who don’t have flood insurance but need to repair their homes.

For hundreds of thousands of Houstonians who had to evacuate, Houston set up 47 shelters. Dallas also set up several shelters across the city, including a mega center that held 5,000 evacuees.

Fellow Southern Preparatory Conference school St. John’s in Houston took in 37 inches of water. However, since the school was mostly spared from damage, it opened their doors to 100 Red Cross medical students and police officers from Lubbock and Fort Worth.

Fifteen percent of the faculty and student body bore serious property damage, and St. John’s Headmaster Mark Desjardins said that the community worked to support the city as well as one another.

“Maverick Nation responded by volunteering in relief shelters, getting in boats and rescuing homeowners, organizing work crews or just showing up in areas at the greatest time of need to lend a hand,” Desjardins said.

The school provided monetary assistance to the school’s students and faculty who were in need, using funds for extenuating circumstances such as floods, fires and wind damage.

“We realized each of our community members are processing this devastation in different ways,” Desjardins said.

After offering psychiatric help to individuals at the convention center, Dr. Catherine Or- sak, mother of senior Mary Orsak and professor at UT Southwestern Medical Center, said people felt a variety of responses.

“Everybody has a different story and a different reaction to it,” Orsak said. “Some patients I met with relocated to Houston after they were hit by Katrina and were now affected by Harvey.”

But with a storm of this magnitude, organizing relief efforts can be a challenge. Unable to save or accommodate every individual, Mehrens said there were major problems during the storm.

“The one thing that could make everything better is better organization. In the scope of things, nobody can image that much water was going to come around and even if they did, it could be so difficult to plan for,” Mehrens said. “As the days went by, however, the communication did get better, just from a trial and error process.”

Community Service Board Chair and senior Shreya Gunukula said that the Com- munity Service Board’s goal is to bring people together. Whether a student calls the Houston area home or has family or friends from the affected cities, many students have some connection to Harvey.

“At first glance you wouldn’t think there is a lot to do in North Texas because Harvey didn’t hit here, but all of the overflow from the people who had to evacuate their homes came here,” Gunukula said.

Hockaday donated 20 laptops to shelters for FEMA that displaced children could use in shelters and 10 boxes of necessities to DISD partners for evacuees. From donated money collected in collection boxes, Hockaday has provided supplies for those in the Dallas Convention Center. The shelter officially closed on Sept. 20.

Habitat for Humanity as well as other development organizations still send groups over 12 years later to rebuild homes in New Orleans that were devastated by Hurricane Katrina. Day reminded students and faculty to think long term in the ways to help.

“Let’s remember that a year from now there is probably more help needed than there is now,” Day said.

Despite the long term devastation, Des- jardins is empowered by his city as he believes Houston is a longstanding diverse and resilient community.

“From the ugly and uninhabitable swamp it [once] was to becoming one of the most welcoming and hospitable places in the country, grit is in our historical DNA,” Desjardins said.