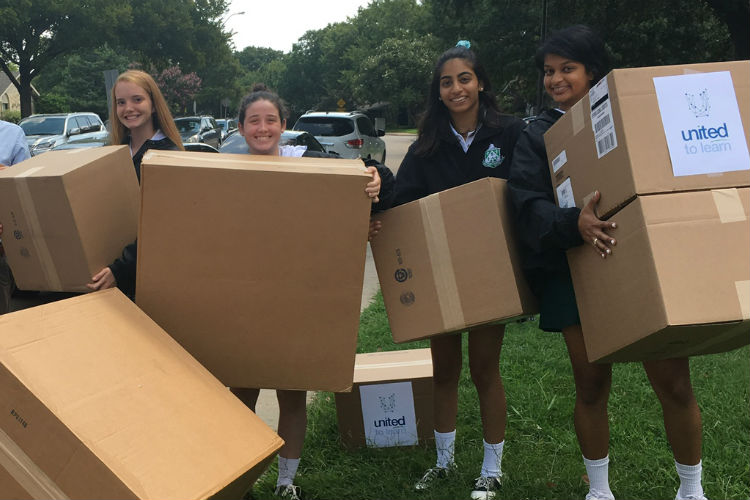 PICTURED ABOVE: Founder and Executive Director of United to Learn Abby Williams (far left) delivers schools supplies to Tom C. Gooch Elementary school along with Assistant Director of Debate and Forensics and seniors Eliza Parker, Katie O’Meara and Shreya Gunukula (from left to right). Photo provided by United to Learn

A product of strong public elementary schools, Founder and Executive Director of United to Learn Abigail Williams was raised by a single mom who worked three jobs continually. Williams’ mom decided it was important to teach her children to understand that education was the only thing that would change the cycle of poverty.

Williams said, “I’m a perfect example of what could’ve been a statistic. I believe that every citizen should be engaged with our public school system to the best of their time, resources, and availability. Everyone should be clearly informed of the challenges that exist within our public schools and where they can get engaged to make a difference.”

Thus, Williams, who has two sons at St. Mark’s, wanted to find a way to provide that same opportunity to others and accomplished this when she found P3 (Public Private Partnerships) Network in the 2012-2013 academic year. Last spring, Williams renamed the organization United to Learn because it better suited the vision of a united community.

United to Learn is a coalition of 24 public schools and 12 private institutions along with third party members who are interested in investing time or resources to developing opportunities for students in North Dallas.

“[United to Learn] found that the problem in the North Dallas community was that there was passion and interest for being engaged in our community,” Williams said. “However, it was difficult given the limited budget and sometimes staffing within our public schools to make that bridge happen effectively.”

United to Learn serves as the infra- structure between the public schools and the private institutions in North Dallas. Together, they identify the resource gaps that exist in the community and how United to Learn can make it easier for different organizations to be engaged and get involved.

“Obviously, our enclave within North Dallas has some of the most affluent and wealthy individuals as in the greater Dallas community,” Williams said. “Yet, within our public school system in that same geographic concentration, almost 9 nine out of 10 of our students qualify for free and reduced lunch.”

United to Learn’s strategic planners decided on four key pillars to focus on: social and emotional health, campus environment, literacy and advocacy and awareness. The first two pillars serve as the foundation that allow the other two pillars to be effective.

“If school is going to be their home away from home, then that time at school needs to make them feel like they are val- ued and often our surroundings are what tell us we’re valued,” Williams said. “If the school is a quality facility with the resources that you need, then there’s an inherent message there.”

This past summer, senior Katherine Pollock interned at United to Learn after she learned about the organization when volunteering at Everette Lee DeGolyer Elementary School through Hockaday community service. Since United to Learn is still fairly new, Pollock worked on setting up the database and checking in with the elementary schools to see how they used the reading grant given by United to Learn at the beginning of the last school year.

“After reading and writing the grant reviews, I grasped how crucial the reading grants were in allowing their reading programs and scores to grow,” Pollock said.

United to Learn’s third pillar is to improve student literacy in third grade, a milestone marker, by working with the schools in order to deliver the necessary resources to the campuses.

Only thirty-seven percent of third graders in elementary schools neighboring Hockaday and St. Mark’s read at a level where they are ready to proceed after graduating from high school. This statistic, reviewed by United to Learn in 2012, struck Courtney Flanagan ‘91 to join the leadership of United to Learn this past spring.

“The main focus is working together and delivering the resources that these campuses need to truly improve student literacy by third grade,” Flanagan said. “Everyone in the Hockaday and St. Mark’s community can help in one way or another whether it’s donating books or funding the school libraries or working with a student on a Saturday morning.”

Recently, United to Learn finished their first network wide school supply drive where teachers from the partnered elementary schools sent in a list of the resources that they needed. The lists were then sent out to schools and organizations so they could donate the specific supplies or any amount of money.

“Every item that was requested by our teachers will be fulfilled because the community absolutely rallied and came together and saw a need that they could fill,” Williams said.

One of the organization’s upcoming projects involves establishing a standard training program for volunteers from all United to Learn private partner schools like Hockaday and St. Mark’s. Flanagan wants the high school students to learn how to reliably measure the progress of the elementary students through the end of the year, which will help the kids improve their reading levels.

Williams doesn’t think there’s one solution to solving the challenges that exist in public education, but if everyone invests time, resources and availability, then there will be progress.

“There’s a lot of complicated problems in education in the United States, and that’s true for DISD,” Flanagan said. “But [third grade reading scores] is one simple metric that is a big lever to push on and address a broad range of those complicated issues.”