Best of the Brew 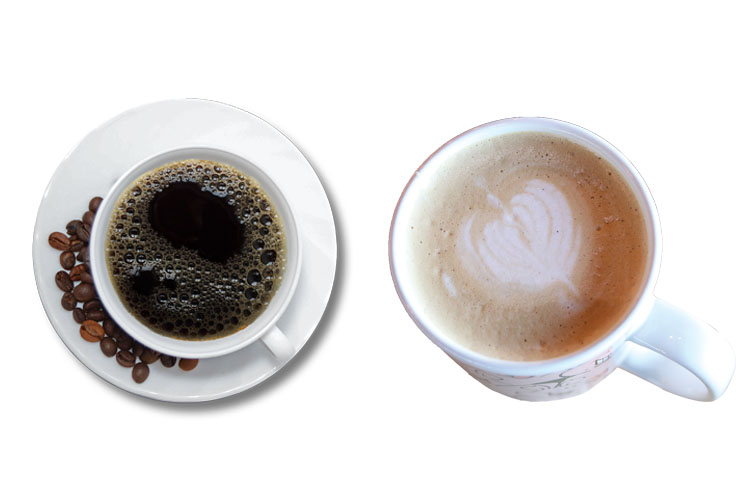 In honor of National Coffee day on Sept. 29, we’re putting plain black coffee up against fancier coffee, everything from lattes to frappuccinos. Each type has its pros and cons, but which one is the best cup of joe? It’s going to be a brew-tal battle.

Every morning I make a run to Starbucks and listen to the barista call out the orders. Very rarely do I ever hear them yell “black coffee.” Coffee is no longer the plain, boring drink that it once was. With all the espresso drinks offered at coffee shops now, including lattes, frappuccinos, macchiatos and more, coffee has been revamped to fit more refined tastes.

In a survey conducted by The Fourcast, out of 122 Upper School students who responded, around 90 percent of the students preferred “fancier” coffee over black. Not only is it more popular, but you also have the option of multiple drink variations, as well as add-ons like syrups and sweeteners. With fancier coffee, you get to expand your taste palette.

Within these elevated espresso drinks, there are both iced and hot versions, and they come in a variety of flavors including salted caramel and strawberries and creme.

And these coffees can be seasonal. Fall means the return of Starbuck’s cult favorite, the Pumpkin Spice Latte. During the winter season, fancy coffees like peppermint mochas and gingerbread lattes are also festive drinks that can automatically get you in the holiday spirit.

Fancy coffee also doesn’t make you as hyper and jittery as black coffee. You can drink fancy coffee drinks all day long, even while you are cramming for a last minute test at midnight. There tends to be less shots of espresso and therefore less caffeine in drinks like lattes or mochas. You’ll still get a burst of energy with the sugar, but it won’t have as an intense of an effect as straight caffeine would.

Fancy coffee also has a milder taste than black coffee. I know many people, including myself, dislike the taste of black coffee because of its bitterness. By simply adding a dash of vanilla or caramel syrup, you can add a flavor punch to an otherwise boring black coffee.

When you are trying to decide at a coffee shop which drink to order is almost like a fun game. Most shops will allow you to order pre-set menu coffee items or customize your own cup of an espresso drink.

With fancy coffee, there also comes a certain coffee culture on social media sites. If you ever browse through the Explore feed on Instagram, chances are that there is a trending picture of fancy latte art.

Want the perfect Instagram photo opportunity? Visit a cute coffee shop and pose with your cup of coffee.

It is tiring and overwhelming to balance academics, sports, extracurricular activities and a social life. It’s no wonder why Hockaday girls love coffee so much.

I’ve appreciated the idea of coffee since the frappuccinos from Starbucks became popular with my friends in Middle School. However, I never felt that I was benefiting from the true effects of this sugary coffee drink. I could tell that the caffeine wasn’t kicking, and I felt tired, bloated and sick from all the processed sugar. A few years later, I tried my first cup of black coffee, and everything improved.

To be frank, I first felt like I was getting punched in the throat by its bitter tang. Eventually, I’ve come to appreciate black coffee as pure sunshine in a cup. I may not always brush my hair in the morning, but drinking my black coffee is a part of my morning ritual.

Along with about 12 percent of the 126 Hockaday students surveyed, up to 35 percent of Americans drink their daily coffee black, according to Statisticbrain.com. Despite the minority percentage, black coffee drinkers are in the advantage; black coffee contains more caffeine and it costs less.

According to the Mayo Clinic, black coffee cuts post workout muscle pain up to 48 percent, adds more fiber into your diet and possibly reduces your risk of cancer.

With fall just around the corner, cozying up to a warm pumpkin spice or vanilla latte sounds like a delicious treat. And it’s totally acceptable to enjoy one of these beverages every once in awhile. However, considering each latte contains about 400 calories and 15 grams of fat, I wouldn’t want to drink one on a daily basis.

Many people tend to buy these fancy lattes and frappuccinos for a breakfast drink or an afternoon pick-me-up, but these sugary drinks actually contain very minimal caffeine. Black coffee has one and a half times the caffeine content as lattes and two times the amount as frappuccinos. Buried under syrups, sugars and milky bases, the caffeine in fancy coffee drinks truly has no effect on the drinker.

And if the slightly horrifying sugar content doesn’t ward you off fancier coffee drinks, the cost might do the trick. On average, the cost of lattes, mochas and frappuccinos at Starbucks hits around $5 per cup, whereas the priciest black coffee only reaches $2.65. If I were to treat myself to two black coffees a week, I would spend about $200 a year, but if I were to do the same with frappuccinos and lattes, I would be spending over $300 more.

And black coffee is convenient, with a Keurig-type coffee maker all it takes is the touch of a button. For me, I like to compare black coffee to a warm hug for your insides!