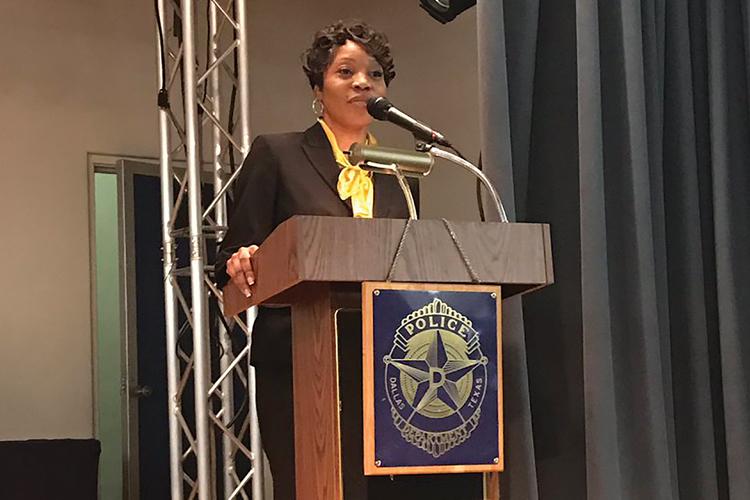 PICTURED ABOVE: Dallas Police Chief U. Renee Hall addresses the 354th Graduating Class of the Police Academy at the Hall of State at Fair Park on Sept. 22. Photo provided by Dallas Police Twitter

On July 7, 2016, peaceful protests of police brutality against African Americans devolved into a bloodbath after a radical sniper, frustrated by the killings of unarmed black men, opened fire on the police protecting the protesters in Dallas. The deaths of five officers that night augured the multitude of setbacks the Dallas Police Department has faced in the last year. For example, the Police and Fire Pension Fund faced bankruptcy, and the police force lost more than 500 officers due to the instability of pensions.

However, the July appointment of Chief U. Renee Hall—who will be the city’s first female police chief—has brought much needed optimism to the downtrodden force as well as to the African-American community who has desperately sought more justice in policing.

Mayor Mike Rawlings welcomed this new arrival to Dallas, tweeting “I am pleased to welcome to our new Chief of Police U. Renee Hall. I knew that we would get many great candidates, and we did because of the great opportunity. We needed an excellent leader, and we got a proven one. I’m pleased with our choice.”

Meet U. Renee Hall
Six months after Ulysses Brown and Bonnie Hall welcomed their third child, Ulysha Renee, in 1971, Detroit police found fellow officer Brown, 28, dead with gunshot wounds to his chest and shoulder. Police never identified the killer and believed that he died during an armed robbery.

Despite this traumatizing experience, U. Renee Hall has fond memories of growing up with her mother and grandmother and thrived in high school, where she served as class president. Hall then attended Grambling State University in Louisiana and graduated with a degree in criminal justice in 1994.

After she returned to Detroit, Hall planned on becoming a lawyer, but after she enrolled in a graduate course at the University of Detroit Mercy taught by then Detroit Chief of Police, Benny Napoleon, Hall decided to  join the police department.

Napoleon told the Dallas Morning News on July 22 that he “knew that someone as smart as she was would be able to rise relatively quickly through the ranks,” and Hall accomplished just that.

However, James Craig, the Detroit Chief of Police who promoted Hall to deputy chief, encouraged Hall to find a chief position even if it meant leaving her hometown. When Hall became a finalist in both Dallas and Kansas City, her mother told her, “Dallas — that’s where you’re going to be.” Hall beat out 6 other qualified candidates (including 3 internal candidates) for the job in Dallas.

Hall, who started on Sept. 6, welcomes the challenge of her new position in a released statement, “I stand eager and ready to roll up my sleeves as we continue our journey in making Dallas the safest community in the country. I truly appreciate the warm welcome and expressions of love received, and I am so proud to call Dallas my new home.”

One Small Step for Hall, One Large Step for Women

Hall’s appointment marks the first time Dallas has appointed a female to serve in the position of Chief of Police. She joins the small club of women at the helm of police departments across the nation. For example, a 2013 survey of the 50 largest police departments showed that only five have female chiefs, according to the National Association of Women Law Enforcement Executives.

Senior and Chair of the Student Diversity Board Anden Suarez remarked, “I was both thrilled and a little surprised [that the city appointed Hall]. I had been awaiting the announcement, hoping that they would appoint a person of color, but I wasn’t entirely confident they would.”

Suarez’s apprehension is not unwarranted. As of 2015, only 11.5 percent of Dallas police officers were women.

Despite her initial concern that Dallas would not appoint a black female to this position, Suarez has great hopes for Hall’s tenure as chief.

“Each time a woman of color earns a leadership position, it is a step forward for diversity,” Suarez said. “However, Chief Hall’s appointment is even more significant given her line of work … Any step towards diversifying law enforcement is a step towards better local and national race relations.”

Upper School English teacher Summer Hamilton echoed this sentiment. Hamilton has long understood the police prejudice against the African-American community and hopes that Hall will bring a more nuanced approach to escalations of force and provide more justice after police brutality against the African American community. But unlike Suarez, Hamilton, who is black, lacks the same optimism due to her long experience encountering systematic racism.

For example, during her 20s, Hamilton spent many restless nights with nightmares that her outspoken brother and father would face injustice at the hands of the police. Now that anxiety has returned since she has a son in middle school.

Hamilton initially “did not want to talk to him about society,” but since many of his friends were white, she had to inform him that “he had to be on his best behavior” because he would be held to a different standard than his peers.

Hamilton would love to see Hall radically alter the police department and rid the system of its inherent racism, but she does not believe one appointment will change everything. On the other hand, she sees this appointment as a win for African-American women who now see themselves more represented in leadership positions.

Hall now joins the rank of what has been referred to as the “Female Mount Rushmore” of Dallas County District Attorney Faith Johnson, Sheriff Lupe Valdez, and Chief Public Defender Lynn Pride Richardson.

Only time will tell whether Hall will usher in a new era for women and for the African-American community. In the meanwhile, Hall is ready to boost morale in Dallas: “We are starting a new chapter in Dallas. We are going to have some great times here in Dallas. … We are going to be a place to be.”