Faces and Places: A Fan Base Like No Other 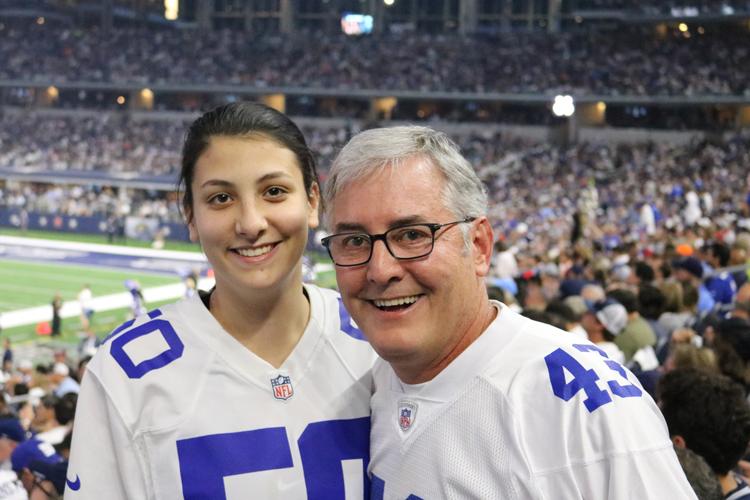 PICTURED ABOVE: Senior Michelle Mankoff sports Sean Lee’s jersey at the first game of the season // Photo by Shreya Gunukula

Camouflaged in a sea of blue and silver, Upper School parent Max Swango doesn’t hesitate to join into the chants and cheers, raising the overwhelming decibel count in Arlington’s AT&T Stadium. With his family by his side, Swango would never miss the opportunity to support the Dallas Cowboys, a team that he has rooted for 51 years, 4 months and 3 weeks. In other words, his entire life.

Whether the Dallas Cowboys are winning or losing, true fans never break the tradition of cheering on America’s Team surrounded by friends and family, all of whom sport the iconic blue and silver jerseys.

Until the arrival of quarterback Dak Prescott and running back Ezekiel Elliott, the Cowboys did not hold a great track record. However, despite this bump in the road, millions of fans, like Swango, continued to stand by a team that they had grown up with.

“Being a Cowboys fan is in my blood,” Swango said. “You find out who the real fans are when they are losing.”

Like Swango, Upper School mathematics teacher and Form III Dean Jessica Chu has stood by the Cowboys since she was in high school. Continuing to cheer for the team through their ups and downs, she and her husband even wrote in their wedding vows to attend at least one Cowboys game every year. Chu also never forgets to bundle up in a Cowboys blanket, her personal good luck charm.

“I’m the type of fan that doesn’t care if they’re winning or losing,” Chu said. “I always stick with them.”

Since the age of 7, senior Michelle Mankoff, another Cowboys aficionado, has spent every game day watching with her parents and grandparents. During the game, the Mankoff’s munch on takeout in their family room, and no one makes a sound. All eyes are focused on the game.

“We are all silent during the game and only talk during commercials and in between plays,” Mankoff said. “It’s a very intense watching atmosphere but enjoyable for members of my family.”

The Swango family also sticks by their traditional pre-game routine, which includes tailgating hours before kickoff. With the construction of the new AT&T Stadium, Swango has watched game day evolve from a day focused solely on football to a much more entertaining and dynamic pregame and post-game experience. In the end, the highlight for Swango is spending time with his family.

“Game days are all about being together as a family,” Swango said.

Jerry Jones Jr., the Chief Sales and Marketing Officer of the Dallas Cowboys, has felt a noticeable shift on game day in the new stadium. By installing the biggest video board in the NFL, Jones hopes to draw fans away from their flat-screens and bring them to the stadium to experience the roar of the crowd in person.

“Even though it’s about the game and the competition, at the end of the day, the NFL and the Dallas Cowboys are entertainment companies,” Jones said.

However, while building the stadium, the Jones family felt a constant challenge to make fans proud.

“We wanted our fans to go there and when they left say ‘I’m proud that that’s the Dallas Cowboys home,’” Jones said.

The Jones family seems to have accomplished their goal. With its state of the art design and cutting edge technology, the stadium is always packed with 80,000 screaming fans.

“The team is owned by the fans, and it’s the fans that make the team what it is today,” Jones said.