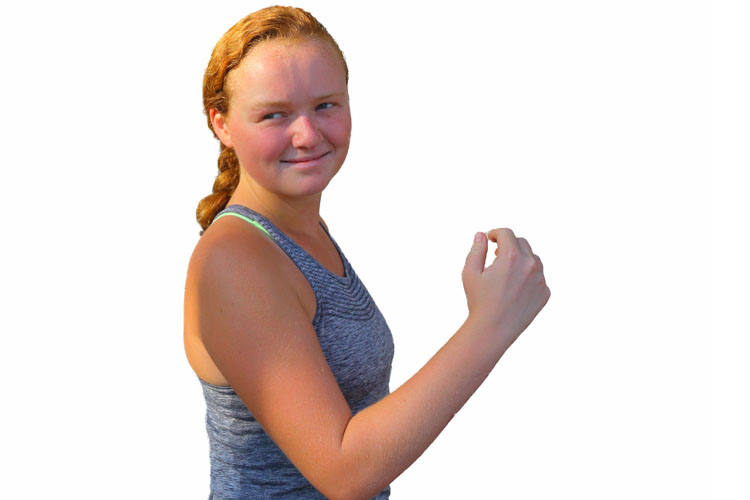 Marathons might not be your thing, or maybe your mile time hasn’t changed since the eighth grade. Perhaps the Ironman Triathlon doesn’t sound very appetizing—I meant appealing— to you. It’s okay if you’re a devout foodie who buys Blue Bell by the gallon. Fitness doesn’t have to be your lifestyle, but we gathered some of Hockaday’s biggest fitness enthusiasts—from coaches to students—to share their favorite Dallas spots to fuel themselves for games, workouts and record breaking moments.

What She Orders: A burger, club sandwich and milkshake?

Junior Justice Coutee-Mccullum has run track for nine years, and for the past six years, she has had Olympic training on her mind. During the summer, Coutee-Mccullum trained three to four times a week. For pre-workout meals, she loves a bowl of oatmeal and her mother’s homemade chicken tetrazzini to keep herself energized during track meets. Although she doesn’t follow a strict diet, Coutee-Mccullum limits her sugar and junk food intake. She also loves exploring the city for new places to dine.

What She Orders: Avocado egg rolls

Senior Campbell Swango heads the Upper School Athletic Board. On top of playing field hockey, soccer and lacrosse, she runs six to nine miles every Saturday morning. Swango makes sure she eats three hearty meals a day to fuel her through practices and runs, especially since she is currently training for the Dallas Half Marathon. “[You need] a really healthy balance. You need proteins, veggies and carbs, I make sure to get all those in,” Swango said.

What She Orders: Dive wrap without the tortilla

Apart from her role as the Director of Physical Education & Interscholastic Athletics, Tina Slinker can be seen six out of seven days per week working out at the Hill Family Fitness Center. In her diet, Slinker tries to make healthy choices during every meal and doesn’t opt for too many carbs. However, for the most part, Sinker doesn’t follow any diet plan. “I don’t try to be so strict [with my diet] that if I mess up one day I just fall off the discipline of it,” Slinker said.

What She Orders: Steak and a side of brussels sprouts

Much of Kathy Fechtman’s work as the Fitness Director and as a mother of two revolves around her love for fitness. In her own time, Fechtman engages in an array of workouts six days a week, including resistance training, running, hiking, biking, snow skiing and yoga. She balances diet and fitness and eats according to her exercise routine. When she kickboxes, she usually stacks up on complex carbs, but when she’s about to head to yoga class, she goes for a bowl of oatmeal. For taste preferences, Fetchman also avoids red meat.

Health enthusiast, Upper School Health teacher and Form IV Dean Rebekah Calhoun prides herself on being active every day either running, cross training or yoga. When Calhoun was younger, she participated in road races, and her current goal is to complete a full marathon. Her health philosophy is all about moderation and balance. “If you exercise regularly and you eat sensibly and in moderation, I don’t think you have to count calories or only eat certain things. I’m big on trade-offs,” Calhoun said. Although her favorite restaurants, both of which are Mexican, are not known for particularly healthy food, they do offer many balanced choices.

Feeling inspired by these delicious and healthy eateries? Feeling motivated by the biggest fitness enthusiasts of Hockaday? Next time you feel hungry after a workout, make sure to check out one of these restaurants on this list!