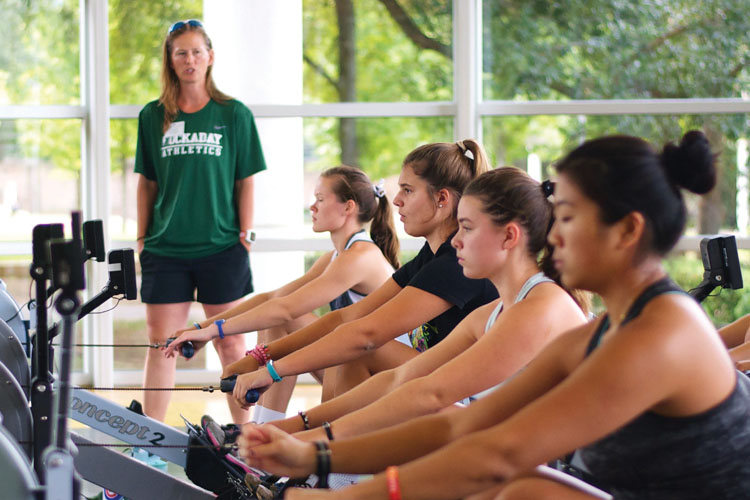 It’s early September on a Tuesday afternoon in the Hockaday Higginbotham Natatorium. A group of girls laugh and yell as they throw the ball to one another. Meanwhile, their coach referees the game. This is crew practice.

During the first week of crew season, the team had to take a swim test to make sure it was safe for everyone to row on the water. Coach Hooper thought it would be more enjoyable to play water polo together.

“It was a great way to learn everyone’s names and just have fun as a team,” junior Meredith Jones, a member of the crew team, said.

Later in the season, as the Hockaday crew team sat around in a circle, new coach Jessie Hooper, who came to Hockaday at the beginning of the 2017-2018 school year, demonstrated the proper form on an erg. Armed with a clear practice schedule, a love for problem solving and an accomplished background in crew, Hooper is ready to lead the team into a new season.

Whether it’s on Bachman Lake or on the ergs at the Hockaday gym, the crew team rows with a strong focus on team effort. This year, they’ll be rowing under the instruction of Hooper, whose background in crew includes rowing at Southern Methodist University as a National Athlete Collegiate Scholar and working as SMU’s Assistant Rowing Coach for 10 years and the Head Novice Coach for 3 years.

Despite the fact that the crew team has to drive all the way to Bachman Lake for practices, the team has been successful, with the varsity quad winning the State Championship just last spring. The team hopes to continue that success this year. While a transition from one coach to another can always change up the dynamic of a team, the crew team members are hopeful.

Since Hooper’s arrival, crew now plays games and participates in bonding exercises to get closer during practices, and every session always ends with a huddle.

One routine Hooper implemented was “kudos sessions” after erg tests, where girls give their teammates shout-outs and compliments.

Throughout September, the rowers will be preparing for the majority of their regattas, which take place in October. Coach Hooper favors cross-training as the team focuses on cardio and endurance twice a week, instead of always practicing on the water or the ergs.

Since the team is very young with almost half of the members as novices, one of Hooper’s main goals of the season is to have a foundation of good technique that they can build on with the power they gain from endurance training.

Furthermore, after working at SMU for many years, Hooper enjoys the challenge of working somewhere new.

“I’m learning where Penson Gym is, where the toolbox and the boathouse is,” Hooper said. “When you work somewhere for a while, you get into a rhythm, but now it’s a little more dynamic. I love the problem solving aspect of coaching.”

To anyone interested in starting crew, Hooper’s advice is to stick it out, especially with the bonds you make with your teammates. In fact, five of Hooper’s bridesmaids rowed with her in school, and Hockaday’s assistant crew coach, Amber Cortese, also rowed with her in college.

“The lifelong friends you make from crew and the bonding you form over really hard practices are so worth it,” Hooper said.