Lee Berger to Return to Hockaday 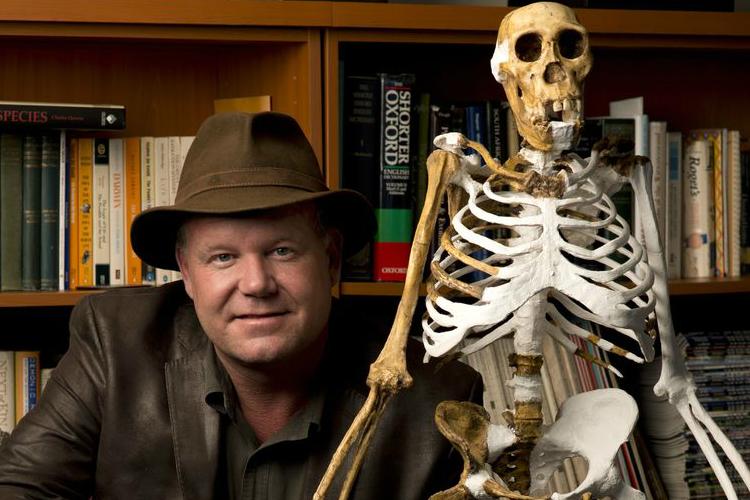 Paleoanthropologist and National Geographic Explorer-in-Residence Lee Berger will be returning to Hockaday in Oct. 10 to talk about his recent findings in South Africa. He will also talk about his new book, “Almost Human: The Astonishing Tale of Homo Naledi and The Discovery That Changed Our Human Story”.

This is his third time to visit Hockaday. On Nov. 6, 2014, he announced his excavation process of the Rising Star cave system. Later on Sept. 29, 2015, he shared his findings of Homo Naledi, and gifted Hockaday a replica of a Homo Naledi’s skull, which is now displayed on the first floor of the Margaret Doggett Crow Science Building.

Senior Nic Kennady recalls when Berger visited. “It was very interesting that it was a major scientific breakthrough in the evolution and to human,” Kennady said.

Berger is well known for his discovery of Australopithecus sediba and Homo naledi. Both “early humans” have made huge contributions to the field of paleontology.

On Sept. 13, 2013, two cavers, Steve and Rick Hunter discovered many littered bones while exploring the Rising Star cave system located in Gauteng, near Johannesburg, South Africa. The bones they discovered were later known as Homo naledi.

To reach the Dinaledi chamber, where the history of humankind resides, excavators and explorers had to go through some complicated narrow and wide parts of the cave. First, a narrow constriction called a superman’s crawl is required to get through. Then, excavators climbed up steep rocks and slid down a nearly vertical passageway to finally reach the Dinaledi chamber.

Berger assembled a team to excavate the fossils in the Dinaledi chamber. For this job, many requirements followed. A participant must be able-bodied, experienced and comfortable in caves for a long time, related in archeology and such subjects, and most importantly, be slim to fit in narrow passageways to enter the Dinaledi chamber. Out of 60 applicants, six young women were selected to join him to South Africa.

Berger’s group found more than 1,500 fossils of at least 15 individuals. However, there was far more to discover in the Dinaledi chamber.

There are no right answers on why these bodies are found deep down the Rising Star cave system. Scientists can only assume that it was a ritual to honor the dead, but do not have a clear picture on why these early humans took so much time to dispose the body.

Also, there are controversies on exactly when Homo naledi existed; it may date from the times of Lucy to more recent when Homo sapiens existed.

Homo naledi, named after “star” in Sesotho, is an extinct species of a group Hominin. Although they share a similar characteristic to the early humans, they have too much of a difference compared to australopithecus, the earliest of humans. Homo Naledi has more primal characteristics such as curved fingers for climbing and different teeth formations. Berger remarked that Homo Naledi should not be identified as earliest humans, but more of a primal ape-like animals.

“We have this timeline of how and where different species arrive. We have gaps everywhere. It’s nice to be able to plug in one of the gaps,” Kennady said.