To Be Honest, TBH is Overrated 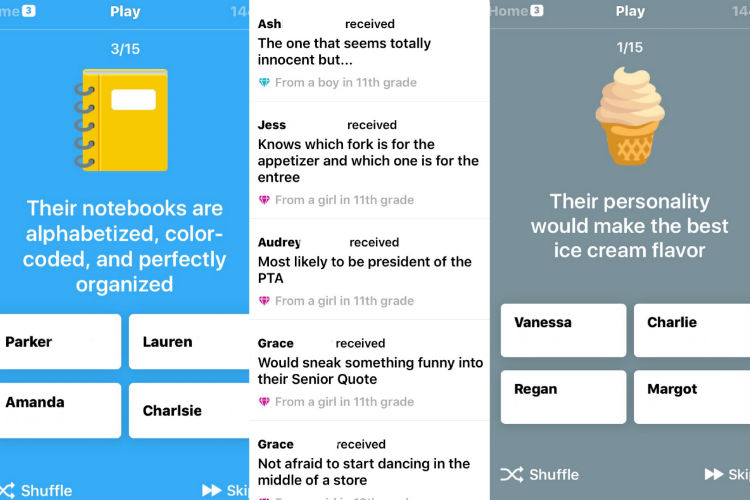 PICTURED ABOVE: Users have the ability to send digital compliments to friends on the app. Screenshots provided by Charlotte Dross.

Human society as a whole tends to have an inherent craving to know what others think of us. Call it self-centered, but we like to know how we are viewed by our peers. In recent years, social media has become a way to showcase our best selves to the public and to craft an image for ourselves online. The app TBH only feeds to this desire of wanting to know how people view our digital “image.”

TBH (which stands for “To Be Honest”) is a social networking app that allows users to anonymously answer questions about other users. The catch is that the app only allows you to leave positive comments about others.

After setting up an account, TBH allows you to friend different people on the app. After friending people, you are able to answer spontaneous questions about these friends. A question will appear on the screen along with four different options of people to choose from. You will essentially choose the name that you feel best fits the question. Questions are meant to be uplifting and light-hearted. For example, a typical question might be “Who has the best smile?” or “Who should DJ every party?”

Each time that your name is selected by someone else, you will receive a notification alerting you of what you have been chosen for. The app does not reveal the identity of the person who chose you however, as it only tells that unidentified person’s gender and grade level.

From the surface, the idea of an app designed solely for the purpose of complimenting your friends seems harmless. However, this isn’t the first “compliment-oriented” app that has been created.

A few years ago, the app “Brighten” was released with a similar purpose, allowing users to leave comments about one another via the new trending social media app. The idea was to leave uplifting commentaries about one another in order to “brighten” someone’s day. However, despite the creator’s wishes, the app quickly became used as a bullying platform when consumers began posting uncensored, negative comments about other users.

Technology and social media in particular have become such integral parts of our society today. Consumers allow their electronics to dictate themselves. Essentially, the “complimenting” of each other carried out through TBH isn’t really complimenting; it’s the mindless tapping of names on a screen. Apps like TBH encourage users to avoid face-to-face contact with each other, thus creating an entirely electronic-based society.

My suggestion: if you’re looking to compliment someone, don’t reach for your phone to anonymously leave a comment online—say it to their face.