Staff Standoff: Is He Our President? 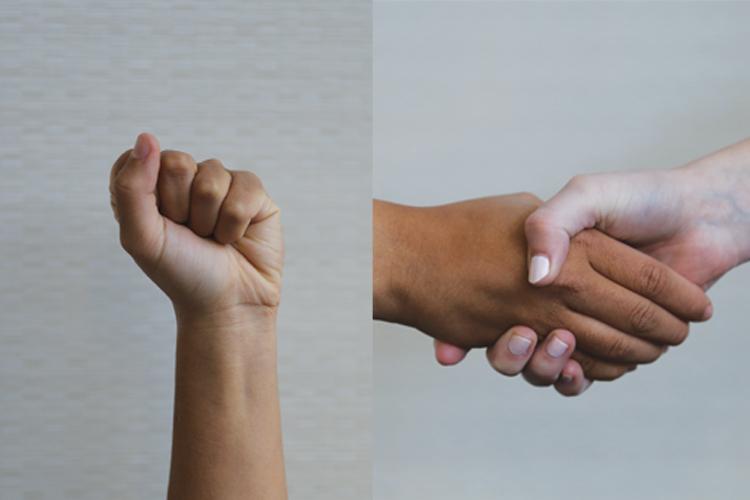 COMPROMISE
By Mary Orsak
To preface this article, I must admit that I despise President Donald J. Trump. His megalomania, ignorance of history and puerile temper render him incompetent to hold the most powerful position in the world. His policies toward African Americans, members of the LGBT community and immigrants retrogress all progress accomplished in securing a more equitable America.

However, I ultimately care for the American people far more than I revile our 45th president, and therefore, I urge the nation to jettison our partisan antics in favor of an effective governance.

The world around us simply proceeds despite our inept leader, and we as a country cannot wait 1194 days for a new president in order to resolve the myriad of international crises. The Catalonians and Kurds will not halt their independence movements; North Korea will not suspend their nuclear wargames; global warming will not wait for us.

As much as I fear that our president may aggravate these situations, I recognize that inaction may cause just as much damage. Washington politicos, senators, congressmen and policy advisers must remain at the table with Trump and compromise on a solution that leads to the least damage.

It may seem as if Trump has no desire to compromise as his childish antics and Twitter rants often do not help his case. But this September, House Minority Leader Nancy Pelosi and Senate Minority Leader Chuck Schumer engaged in a substantive conversation about extending Deferred Action for Childhood Arrivals with Trump. The president appeared somewhat receptive to bipartisan action simply because all unilateral Republican efforts have failed despite a majority in both Congressional chambers.

Democrats, moderates and Republicans alike must remember that bickering will not aid the 3.4 million inhabitants of Puerto Rico devastated by Hurricanes Irma and Maria, the estimated 11 million unauthorized immigrants in the U.S. and the 500,000 displaced Rohingya, driven from their home of Myanmar by religious persecution.

Instead, Washington must focus on decisive action. Undermining the president solely because it pleases your base, not because the president’s proposed action would inflict significant harm, reflects negligence of your duty in office.

Similarly, as much as I wish Trump was #notmypresident, I cannot deny the irreversible truth that the American population elected him and that only he holds the extensive authority of that office. We must employ that power for good, and that requires his aides, advisors, cabinet members and Americans at large to continue to work alongside him, advise him and compromise with him. He may have the temperament of an elementary school child, but he does have access to the nuclear codes. We cannot forget that. Continue to protest, to elucidate corruption and to challenge this White House to act in the best interest of the American people. But as you picket Pennsylvania Ave., ask yourself whether such actions of resistance will truly result in better conditions for the citizens of this nation.

I hate Trump. But I love America, and I will do anything to save it.
RESIST
By Cheryl Hao
On Nov. 13, five days after the election of Donald Trump, immigrant and mother of two Teresa Díaz protested in New York against Trump’s promised deportations.

“I’m marching today to show that I’m not afraid,” Diaz told Rolling Stone in a “Here to Stay” rally.

Since then, thousands of protests have been organized to bring awareness to issues such as women’s rights and police brutality, with the collective end goal to resist Trump and his  vitriolic rhetoric and legislative plans. However, with the rise of these civil disruptions, there is the question of if protesting really matters.

Many Americans believe that protesting is ineffective and disruptive, as politicians—especially Trump—are not usually phased by it. Though legislators may not base their agenda or change their views in accordance to current protests, according to a study conducted by economists of Harvard University, protesting gets people politically involved. This enough is a sign that protesting is an effective mechanism for change.

Protesting is also a place for students and undocumented immigrants to participate in democracy and make their voice known, especially since members of both communities could not vote in an election that arguably affected them the most.

And at the end of the day, protesting is democratic and constitutional. Trump isn’t.

To Trump, being president means not that he will rally for Americans, his voters or his party. He does not care about the American people, and no matter how much politicians can attempt to compromise with him and his agenda, it will not change the intention of his legislation: to inflict harm on groups of marginalized people. To Trump, this is about himself. He has absolutely no loyalty to his party, his voters or the American people at large.

For example, because Republican senators decided to not vote on his Affordable Care Act repeal in September, Trump now plans to sign an executive order because, as he stated on his Twitter, “Congress can’t get its act together on HealthCare.” With Trump unable to have productive conversations with members of his own party, it seems unreasonable and far reaching to expect him to compromise with those who oppose him.

But, what does a compromise with Trump entail? For his new travel ban, the Muslim Ban 3.0 as the media is calling it, should we be okay with only indefinitely banning immigrants from Iran, Libya and Syria, as opposed to Iran, Libya, Syria, Yemen and Somalia?

Through Trump’s tweets, we see that he may be the first leader of a country in history to initiate a nuclear war over Twitter. What compromise can we make here? We can only bomb North Korea with atomic bombs, but no hydrogen bombs? There is no middle ground, as Donald Trump is not a man to compromise with.

Progress comes from resistance. This is how our democracy thrives. Donald Trump will never be my president, and I, along with people like me, will continue to resist until our disruptions become definite victories.